Prince George's Exhibit Hall D/E (Gaylord National Resort and Convention Center)
K. Hirosawa (Tokyo University of Agriculture & Technology), M. Saito (Tokyo University of Agriculture and Technology), A. Masuya, and K. Kawakatsu (Tokyo University of Agriculture & Technology)
In recent years, Si negative electrodes (NEs) have been intensively researched, mainly in the field of Li-ion batteries (LIBs), because the theoretical capacity of Si (ca. 4200 mAh g−1) is higher than that of graphite ones and their redox potential is suitably low (below 0.5 V vs. Li/Li+). However, it is still difficult to use pure Si NEs in the LIBs because of their large volume change during the charge/discharge (i.e., alloying/de-alloying) process. This large volume change causes rapid capacity fading by crack formation and pulverization of the Si active materials and continuous electrolyte decomposition on the newly exposed bare Si surface. To suppress the physical stress and electrolyte decomposition, Si nanomaterials such as nanoparticles, nanowires, and thin films have been studied. Also, composite materials with carbon or SiOx (Si/C or Si/SiOx), Si thin flakes, and three-dimensional porous Si materials have been examined. On the other hand, we recently found the effects of Li pre-doping on the Si NE stabilization, i.e. cancelling of initial irreversible capacity by electrolyte decomposition and pre-formation of proper SEI film for smooth Li alloying/de-alloying reaction. In addition, the application of stabilized Si NE to a novel hybrid capacitor system was performed [1]. In this study, we will demonstrate the effects of fluoroethylene carbonate (FEC) at Li pre-doping on the condition (homogeneity and depth) and discuss the electrochemical properties of Li pre-doped Si NEs including its hybrid capacitor performance.

Si nanoparticles (NPs) (Alfa Aesar®, Φ ≤ 50 nm) were used as the active material for the Si NE. A slurry was prepared by mixing 83.3 wt% Si NPs, 5.6 wt% Ketjen Black as a conductive agent, and 11.1 wt% polyimide binder (Nippon Kodoshi, SOXR-0/NMP) with NMP as a solvent. The slurry was coated on Cu current collector, dried at 80°C for 1 h, and then cured at 200°C for 5 h. Li pre-doping of the Si NE was conducted by making a contact with Li foil and immersing in 1.0 M LiBF4/PC without or with 10 wt% FEC additive. Moreover, vacuum pressure impregnation (VPI) treatment was also tried to conduct prior to the Li pre-doping using the same electrolytes for further uniform lithiation of Si. Coin-type cells consisting of the Li pre-doped Si NEs, Li metal counter electrode and 1.0 M LiBF4/PC electrolyte were fabricated and the cell performances were examined by charge/discharge test in constant current mode at 30oC.

Fig. 1 shows SEM images of the Si NEs after Li pre-doping without and with FEC. After Li pre-doping, the surface became rough, both without and with FEC addition, and the color changed to bright gray, indicating expansion and improvement in the electronic conductivity of Si NPs. Li–Si alloying was not homogeneous and two separate phases (dark and bright gray parts) formed in the Si NE (Fig. 1(a)). However, the 10 wt% FEC addition (Fig. 1(b)) enable a homogeneous pre-doping as showing the entire bright gray surface. To see the depth of Li pre-doping and stability of the following Si NE, the charge/discharge half-cell test was conducted for the Li pre-doped Si NEs (Fig. 2). Open circuit potential of the half-cell became lower form 0.341 to 0.142 V and extra discharge capacity by electrolyte decomposition was successfully suppressed by the FEC addition. This effect was kept during the following charge/discharge cycling (Fig. 3). The Li pre-doped Si NE using FEC additive exhibited a good cycleability having a low potential below 0.5 V, implying the stabilization of Si NE. The detail for the application of the stabilized Si NE to the hybrid capacitor NE and the cell performance will be reported in the meeting. 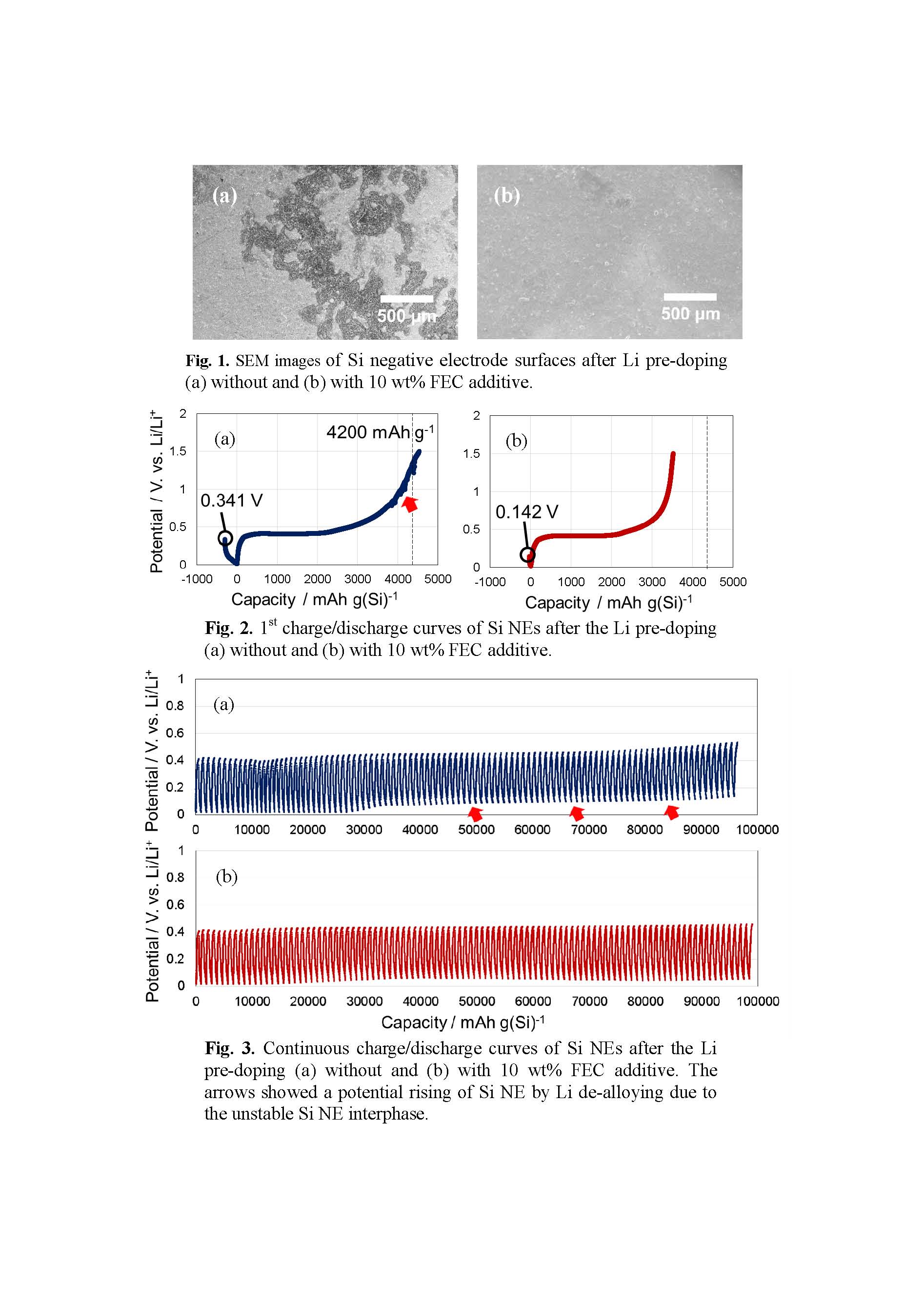