Aqueous precursor solutions containing ZnCl2 and CoCl2 or MnCl2 at various ratios in a total concentration of 0.2 M were basified with NaOH to ca. pH 13, and subjected to a 2.45 GHz MW[1,2] to promote reaction at 160°C for 30 min. The products were characterized by FE-SEM, XRD and UV-Vis. Mesoporous electrodes of ZnO and Zn0.92Co0.08O were fabricated by doctor blading method.

The green-colored Co-doped samples exhibit characteristic absorption peaks at around 560, 610 and 650 nm due to d-d transition of Co(II) and a red shift of the bandgap absorption onset. Phase separation of Co(OH)2 has also been suggested by XRD and FE-SEM images for x > 0.1, so that doping up to about 10% was apparently possible. Systematic shift of the three major XRD peaks of Wurtzite ZnO towards low angles was recognized upon increasing x, suggesting substitution of the lattice Zn2+ ions with Co2+. Lattice constants were calculated as a = b = 3.252 Å, c = 5.204 Å for ZnO, whereas they were enlarged to 3.277, 5.244 Å, respectively, for x = 0.20.

CVs of ZnO and Zn0.92Co0.08O electrodes in a neutral electrolyte are compared in Fig. 1. Besides the clear decrease of cathodic charging and discharging currents, Co-doping results in an anodic wave at around + 1 V due to Co2+ → Co3+, followed by a large increase of irreversible anodic current, as compared to the non-doped sample. Chronoamperograms for a few minutes confirmed this current enhancement and gas bubble evolution from the anode due to catalytic oxidation of water (2H2O → O2 + 4H+ + 4e-). 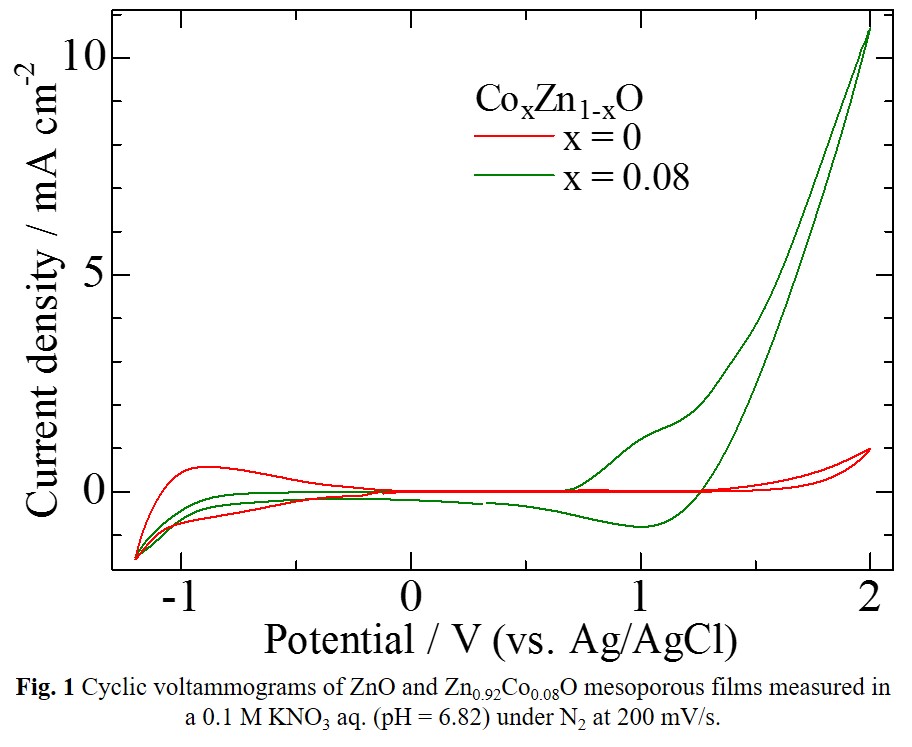