However, because hybrid vehicles have a limited space for an equipment of electric power conversion systems, the electrical modules for them should be as small as possible. This trend would continue to demand smaller size of power devices in near future. Therefore, it is required to provide faster response of cooling systems.

One of the methods to realize this is Peltier cooling. The conventional Peltier devices are mainly applied to such as cold storage chambers. Because the function of the conventional device makes something a lower temperature than that of neighboring ambient, it is generally concluded that the thermal conductivity of the Peltier devices should be low. In contrast, in order to suppress the increase of the temperature of the power devices, Peltier devices should have a high thermal conductivity. Thus, we focused on silicon (Si), which thermal conductivity and Seebeck coefficient are high, as a material of the Peltier devices. The calculated power factor of Peltier effect (σS2) of Si has a maximum when the carrier density is within 1018- 1019 cm-3. With such a carrier concentration of bulk Si, a contact resistance between Si and electrode metal may be not negligible. Therefore, it is necessary to apply the technologies for decreasing the contact resistance, such as higher carrier doping or metal-silicidation.

Moreover, an application of Si-based Peltier devices for power devices requires optimizations of the structure of cooling system by predicting the cooling performance. Specifically, it is necessary to calculate the Seebeck coefficient, resistivity, and thermal conductivity of the Si-based Peltier devices with layered structures. In fact, some of reports have discussed the dependencies of electrode metals on these properties of Si. However, there are few reports on quantitative evaluation about the mechanism or the mechanism of electrode dependence of the Seebeck coefficient. Therefore, in this research, we calculated the Seebeck coefficient by using 3D model, and investigated the effect of interface layer between metal and Si.

The structure of the Si sample for the calculation is the following: two electrodes with 2.0 mm × 0 .5 mm were deposited on the both ends of the Si substrate with the size of 2.0 mm × 15.0 mm × 0.625 mmt. It was assumed that the interface layer is formed between these electrodes and Si substrate. In addition, we investigated the influences of the Seebeck coefficient, resistivity, and thermal conductivity of the interface layer on the total Seebeck coefficient of the whole system. This total Seebeck coefficient was calculated by measuring potential difference ΔV between the two electrodes of a sample with a temperature difference ΔTof 50 K.

This research is supported by “Thermal Management Materials and Technology Research Association (TherMAT)” in New Energy and Industrial Technology Development Organization of Japan. 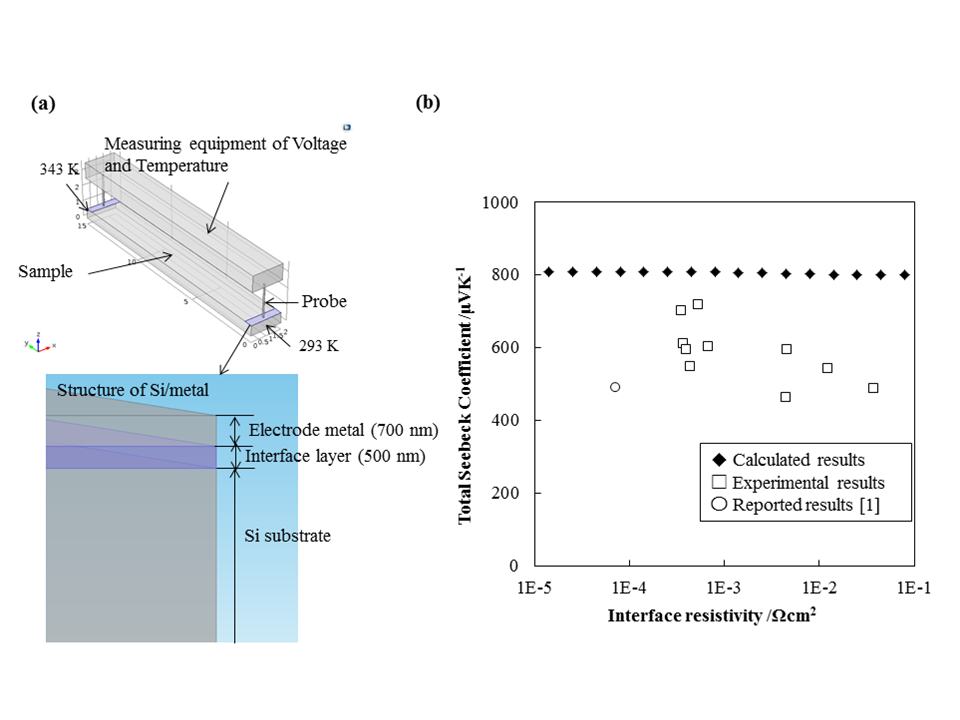