National Harbor 1 (Gaylord National Resort and Convention Center)
C. Gong, Z. Jadidi (University of Maryland), F. El Gabaly (Sandia National Laboratories), E. J. Fuller (Sandia National Labs), A. A. Talin (Sandia National Laboratories), and M. S. Leite (University of Maryland)
All-solid-state Li-ion batteries (SSLIBs) with enhanced safety are a promising candidate for large-scale energy storage applications, such as hybrid vehicles. However, further improving the electrochemical performance requires controlling and suppressing the degradation mechanism for SSLIBs upon cycling. To reveal the nature of the irreversible reaction that takes place in SSLIBs, we combine scanning/transmission electron microscopy (S/TEM), X-ray photoelectron spectroscopy (XPS), conductive atomic force microscopy (c-AFM), and time-of-flight secondary ion mass spectroscopy (ToF-SIMS). We directly image Li ions within each battery component during charging/discharging for SSLIBs with Al and Si anodes. We observe the formation of an Al-Li-O complex capping the AlLi alloy on the strain-free surface of the Al anode using S/TEM and XPS [1, 2]. We found that this layer is insulting through c-AFM and therefore retards electrons to flow in and out of the anode, ultimately leading to the poor capacity retention. For comparison, we fabricate SSLIBs with Si anodes, a high-capacity material. We identify the electrical property of the Si anode remaining intact after cycling by c-AFM. This battery shows a Coulombic efficiency of ~98% after 100 cycles, see Fig. 1.

To further investigate the irreversible lithiation process of Si anode SSLIBs, we directly map Li ions by ToF-SIMS. We determine the Li distribution within all active layers (anode, electrolyte, and cathode) at three state-of-charge: pristine, charged, and cycled. We demonstrate a remarkable spatial variation of Li concentration within the anode upon the first charging, later the ions are trapped and cannot be fully extracted from the anode during subsequent cycles. The accumulation of foreign ions within the Si anode is detrimental to the structure integrity, resulting in the capacity loss after cycling the device [3]. Moreover, we identify “hot spots” of Li ions within the LiPON electrolyte, which could be ascribed to the amorphous nature of LiPON. Overall, we provide critical information about how the capacity fades and where the irreversible lithiation happens. Our results will undoubtedly contribute to the design of energy storage devices with enhanced performance. 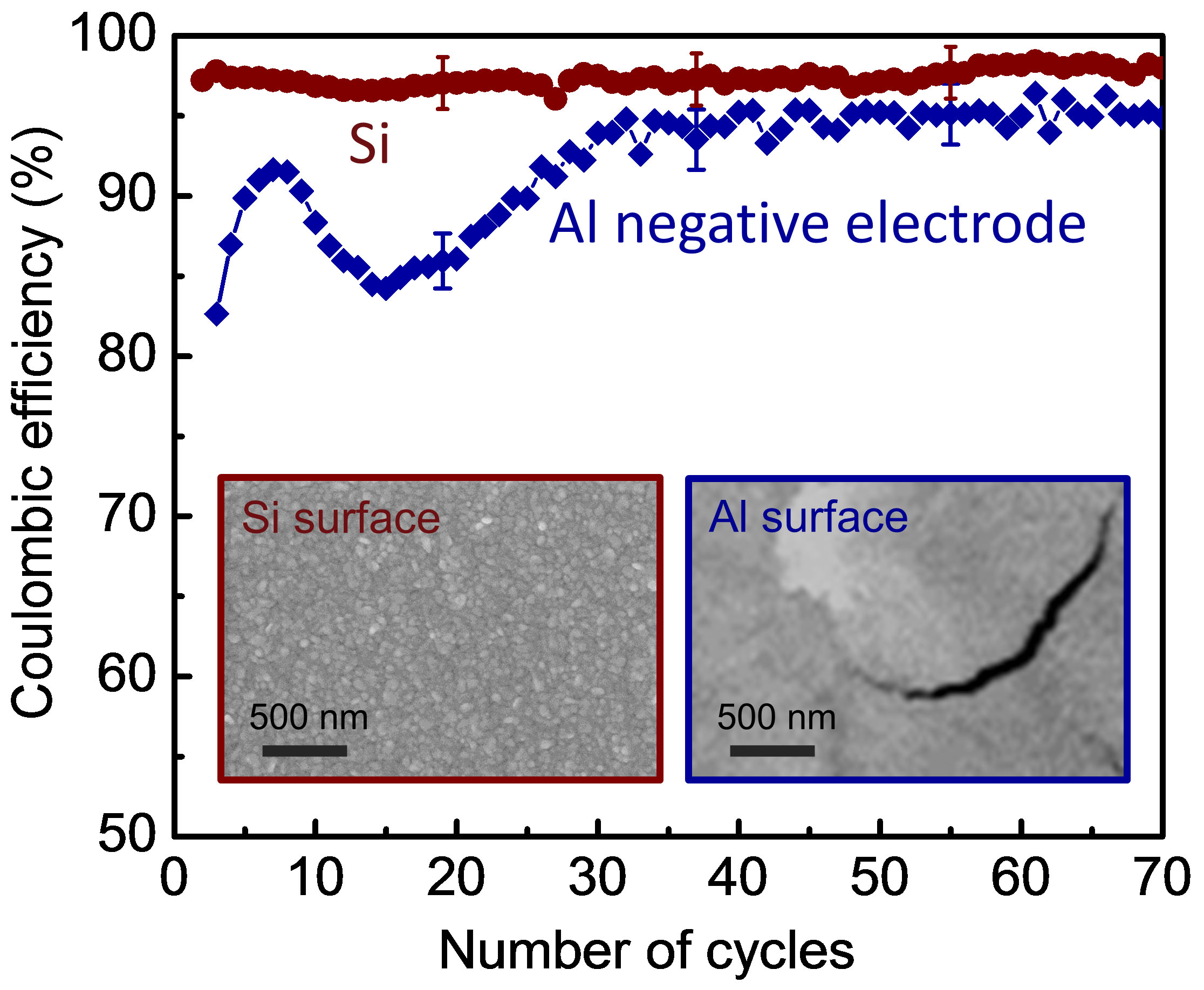