Maryland A (Gaylord National Resort and Convention Center)
V. P. Nemani and K. C. Smith (University of Illinois at Urbana-Champaign)
Redox flow batteries (RFBs) allow independent control of energy capacity (system size) and power density (reactor design) making them suitable candidates for grid-scale energy storage. Such large-scale applications necessitate high performance and cost effective designs. Aqueous vanadium redox flow batteries are largely studied at laboratory scale, but their application to the grid is restricted by the poor electrochemical stability window of aqueous based system, high costs associated with the metal ions such as vanadium and ion selective membranes. Redox-active polymers (RAPs) are potential redox active molecules which mitigate the parasitic crossover phenomenon. Previous work [G. Nagarjuna et al., J. Am. Chem. Soc., 136, 16309 (2014)] has shown that RAP polymers of molecular weights ranging between 0.56kDa to 300kDa showed increasing rejection rates at the Celguard separators with molecular weight, the largest molecules being rejected 86% relative to supporting salt species in the electrolyte solution. Although large RAP molecules have low trans-separator permeability, the viscosity of the electrolytes increases drastically with RAP concentration. The viscosity of the electrolytes is also sensitive to the supporting salt concentration [ T. Janoschka et al., Polym. Chem., 6, 7801 (2015)]. Rheological properties of the electrolyte influence the flow distribution inside the reactor eventually effecting the reaction distribution. Therefore, it is important to study the flow rate effects on performance of RFBs and estimate the pressure drops inside the reactor since high pressures risk the mechanical integrity of the system and can enhance crossover.

A two-dimensional model based on porous electrode theory is developed to simulate the performance of a RAP based RFB with inter digitated flow field. The tanks are modeled as perfectly mixed units and we show that the mixing in the tanks causes significant loss in capacity particularly at low flow rates. In addition to this, we developed a simplified model which predicts the charge utilization (%) and polarization of an RFB as a function of two dimensionless numbers: (1) tank-to-electrode volume ratio, and (2) ratio of flow rate to the stoichiometric flow rate,. With the help of these two models, we identify certain irreversibilities inherent to the conventional RFB design, apart from ohmic resistances, which arise due to thermodynamics of mixing in the tanks and non-uniform reaction current distribution within the reactor.

Operating the RFB at high flow rates would enable high utilization and low polarization. Fig 1 (a) shows the development of charge/discharge voltages as a function of the cell’s average state-of-charge at low () and high () flow rates. The polarization, which is measured by the difference in average charge and discharge voltages, is high at low flow rates and low at high flow rates. The spatial variation of the pore scale reaction current density at halfway of charge/discharge process reveal that the reaction current is localized at the flow inlets of the electrodes leading to high polarization. At high flow rates, the reaction current is more uniformly distributed through the volume of the electrode leading to greater utilization and low polarization. Figure 1(b) shows the variation of the magnitude of the charge utilization (Fig 1(b)(i)) and polarization (Fig 1(b)(i)) with the non-dimensional flow rate, as predicted by the porous electrode model and the simplified model. For flow rates greater than twice the stoichiometric flow rate, , the utilization increases and polarization decreases with increasing flow rate. For flow rates close to stoichiometric value, , the RFB approaches a non-flowing battery, therefore polarization decreases with decreasing flow rate in that regime. A simplified transient model developed based on species conservation equation, agrees well with the porous electrode model and therefore can be used as a tool for performance predictions. On-going work is aimed at modeling crossover and determining the losses associated with it.

The modeling results highlight the importance of flow rate and tank design. Results confirm that the RFBs should be operated at high flow rates from the perspective of electrochemical performance, but high pressures associated with high flow rates, particularly for viscous electrolytes such as RAPs, would require bulky reactor designs to ensure mechanical integrity and also the high pumping costs associated would reduce the effective energy stored by the entire system. This motivates optimization of RFB design, operating conditions and cost, the relative importance of which is dependent upon the scale of demonstration (lab or grid).

We gratefully acknowledge the financial support of the Joint Center for Energy Storage Research (JCESR). 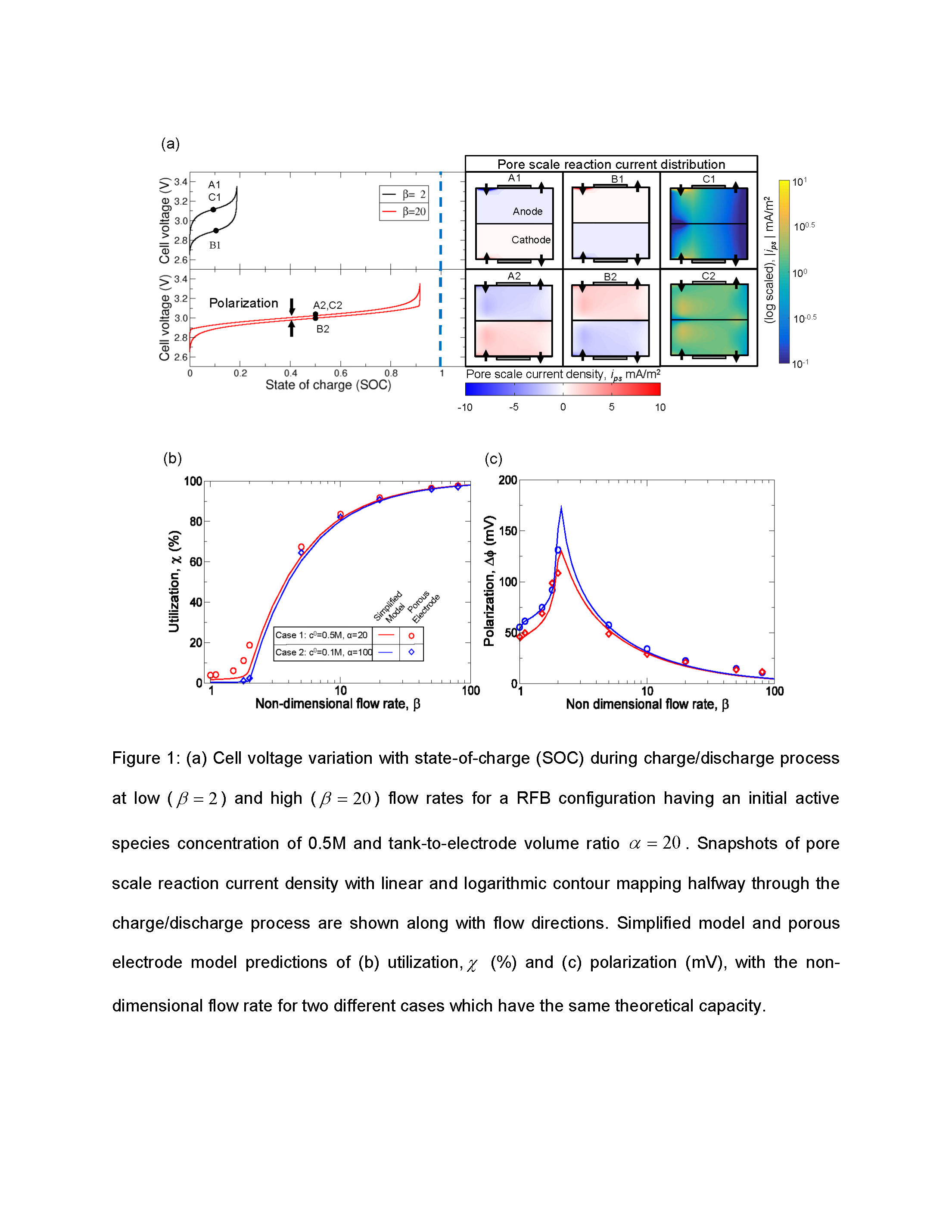