In this study, oxide ion conduction paths of these two systems, Pb1-xLaxWO4+x/2 and Ca1-xKxWO4-x/2, are evaluated by means of high-temperature neutron diffraction experiments coupled with maximum entropy method and compared based on the defect structure.

Pb1-xLaxWO4+x/2 and Ca1-xKxWO4-x/2 (x = 0.2 for both systems) were prepared by solid state reaction method from the starting oxides. Calcining and sintering temperatures are selected as 800oC and 900oC, respectively for Pb1-xLaxWO4+x/2, and 800oC and 1000oC for Ca1-xKxWO4-x/2. The phase singularities of the obtained compounds are confirmed by X-ray diffraction.

About 10 g of the sample pellets were inserted into a vanadium holder through a thin quartz tube and neutron powder diffraction experiments were performed in the temperature range between 200°C and 800°C by using SHRPD diffractometer in J-PARC. After the Rietveld refinements using Z-Rietveld code, oxide ion conduction paths at high temperatures were estimated by using maximum entropy method (MEM) using Z-MEM. Typically, 50 reflections are served for the MEM analyses.

Figs.1 and 2 represent the nuclear density distribution for Pb1-xLaxWO4+x/2 and Ca1-xKxWO4-x/2, respectively, obtained by MEM based on the neutron diffraction data collected at 800oC. Regular atomic positions obtained by the Rietveld analysis are indicated by spheres in the figures. For Pb1-xLaxWO4+x/2, nuclear density seems to extend from regular site to interstitial ones, suggesting the oxide ion diffusion path occurs parallel to the a-b plane. On the other hand, Ca1-xKxWO4-x/2 without oxide ion interstitials did not show such diffusion path parallel to the a-b plane, but the neutron density distribution extends toward c-directions. Defect structure would largely attribute to the diffusion mechanism in these two scheelite systems. 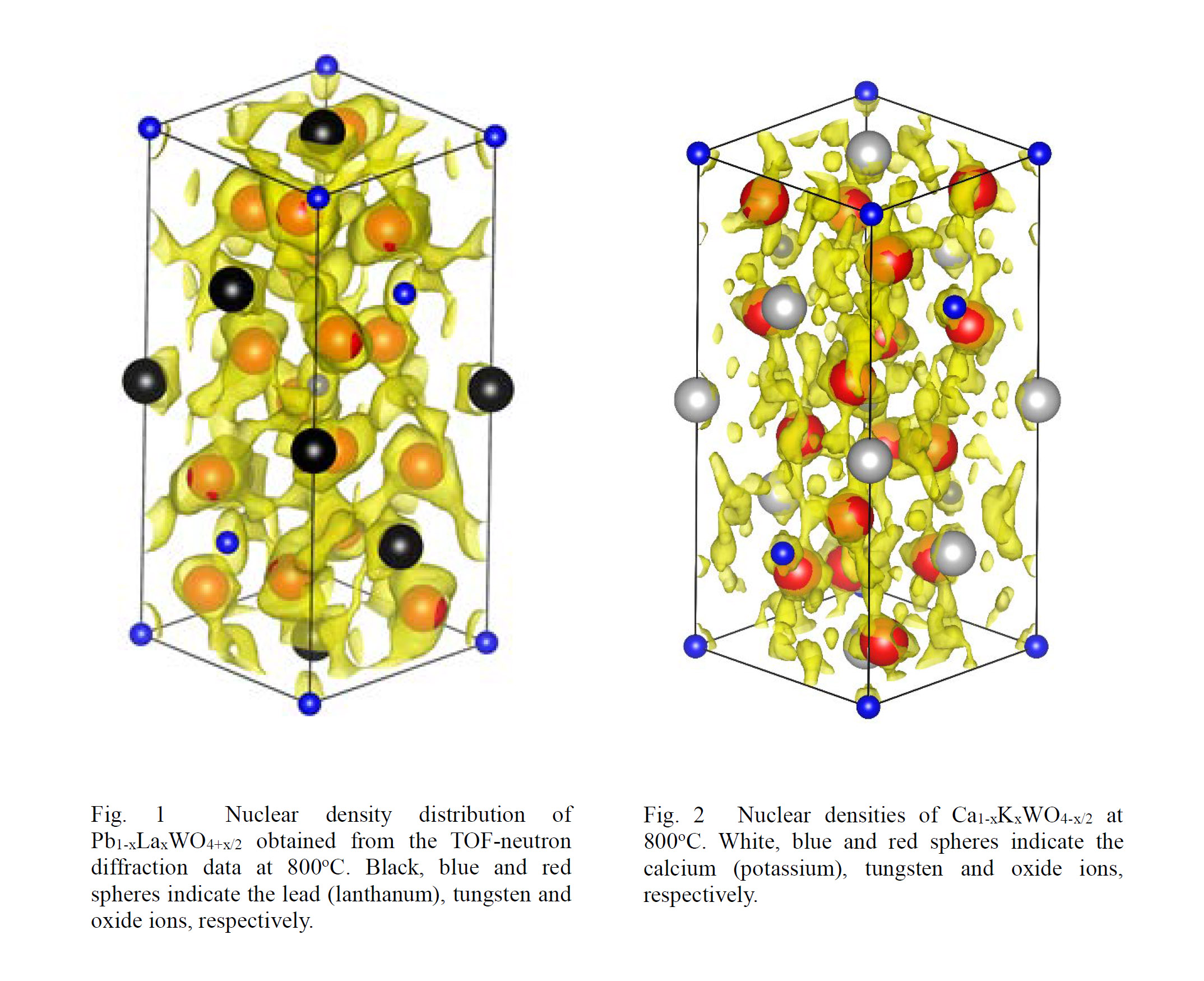