Prince George's Exhibit Hall D/E (Gaylord National Resort and Convention Center)
M. Cataldo, A. Bonakdarpour, G. Afonso, M. Mohseni, and D. P. Wilkinson (University of British Columbia)
Ferrate ions are highly oxidizing and unstable species which are challenging to quantify and analyze. They are, however, becoming increasingly recognized as an excellent candidate for a number of applications such as water treatment. Development of ferrate-based technologies for drinking water treatment in remote area requires: a) an accurate assay of the produced ferrates, b) better understanding of the stability properties and c) in-situ electrochemical generation at neutral pH conditions. In order to investigate the possibility of using on-site generated ferrates for treatment of drinking water, we conducted a thorough research program covering the following topics:

1) Quantification of Electrochemically generated Ferrates. Four analytical methods (existing and new) for quantification of ferrates were investigated and compared. These methods include titrimetric analysis, and spectrometric techniques such as direct colorimetric, measurements of ABTS or NaI colorimetric. In terms of accuracy, cost, simplicity and time required the modified indirect UV-Vis/NaI method is shown to be the most effective of all the four methods investigated.

2) Electrochemical ferrate stability. Stability of ferrate species, produced electrochemically for on-site treatment of drinking water, was studied for a number of conditions including: pH, temperature, initial concentration effects, and presence of impurities in order to assess the degradation process quantitatively. Degradation of ferrates for the pH range of 5 to 13 appears to have a first order kinetics behavior. Degradation of ferrates over a temperature range of 5 ºC to 60 °C shows an Arrhenius-type behavior with an activation energy of 348 kJ mol-1. Initial rate analysis of degradation reveals a reaction order of about 1. Impact of potential impurities, such as salts and natural organic matter (NOM), source of water (e.g., tap, deionized and water from natural lake) were also studied and results will be presnted.

3) Electrochemical generation of ferrate species at neutral conditions. Undivided batch (100 mL) cell. An undivided batch cell was used to study the electrochemical generation of ferrate species at neutral conditions (pH ~ 7) using boron-doped diamond (BDD) electrodes and iron (III) salts for applications in drinking water treatment. The impact of several relevant variables, including current density (5-55 mA cm-2), pH (5-9), type and concentration of the dissolved iron salts on the production of ferrates were examined. In addition, linear sweep voltammetry (LSV) studies were conducted using buffer electrolytes with and without the presence of iron (III) to decouple the parasitic oxygen evolution reaction. The LSV measurements in the presence of iron (III) and with a neutral electrolyte exhibit oxidation peaks centered ~ 2.0 V (vs. SHE), indicating the production of ferrates at this pH. The rate of ferrate generation is not strongly affected by the pH condition; however, current density and the source of iron were found to have a higher impact on the production rate of ferrates. The efficacy of the process was higher using FeCl3 compared to other salts such as Fe2O4 and FeO(OH). Semi-batch (2 L) reactor. This approach provided a number of improvements over the batch cell, including: recirculation, proper temperature control, lower cell resistance, excellent mixing, provision for the use of ion exchange membrane, and in-situ pH control. The preliminary results from this benchtop semi-batch reactor showed an improvement in the current effiency from 8% (batch cell) to 75% (semi-batch cell). Overall, about 8 mmol of ferrates was generated during a 2 hour electrosynthesis period exceeding the water treatment targets of about 14 µmol of ferrates. 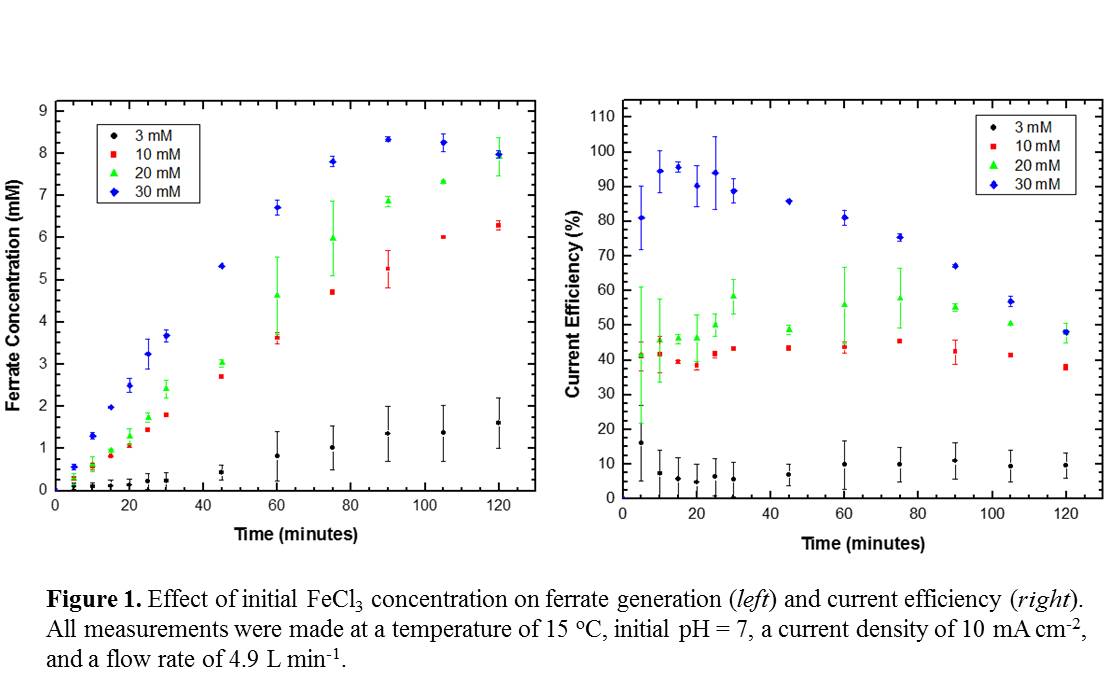