Maryland C (Gaylord National Resort and Convention Center)
D. J. Bazak, S. A. Krachkovskiy, and G. R. Goward (McMaster University)
The parameterization and validation of robust electrochemical models for lithium-ion batteries in automotive applications, which are intended to address both the state of charge (SOC) and state of health (SOH) estimation problems, is an important milestone in their widespread deployment. Much effort has been focused on the mass transport characteristics of the electrode domains, but a significant fraction of overall polarization stems from concentration gradients that form in the electrolyte domain and their attendant effect on the mass transport parameters, which have recently been shown by in situ MRI to be quite significant, even within modest operational regimes.1 The effect of temperature on these concentration gradients remains to be explored by in situ MRI.

The mass transport in the electrolyte domain is typically modelled as being governed by material balance of a binary salt in a concentrated solution, which can be realized by modifying the Nernst-Planck equation to have non-constant, concentration-dependent coefficients (Equation 1).2 This system has a steady-state concentration gradient (Equation 2) when migration flux driven by the potential and diffusion flux against the concentration gradient are in equilibrium (see Figure 1A). Using in situ MRI, the evolution of this gradient toward the steady-state upon constant-current charging can be monitored (Figure 1B). A surprising outcome of these studies was that at 10°C, an equal parts (v/v) mixture of EC/DEC with 1.00 M LiPF6 exhibited anomalous concentration gradient formation (Figure 2) with a current density corresponding to 6 A·m-2 (or ~C/4), whereas the same mixture and cell construction could be polarized without difficulty at room temperature. On comparing raw MR images from before the polarization and after the relaxation of the disrupted concentration gradient, it is clear that the overall signal intensity is lower whilst the shape of the profile is retained, which is a direct indicator that salt precipitation has occurred.

There are two routes by which this salt precipitation phenomenon can be avoided: lowering the salt concentration, so that the absolute concentration at the upper portion of the gradient is decreased proportionately for an equivalent current density, and the selection of an electrolyte with better low-temperature solvation characteristics. Successful polarization and visualization of the electrolyte domain in situ was achieved with a 0.85 M variant of the equal-parts EC/DEC mixture utilized above, at a series of temperatures. This constitutes a means of avoiding the critical concentration at the low temperature where the 1.00 M variant exhibited precipitation, but it would come with a trade-off of reduced ionic conductivity. More significantly, a ‘full-strength’ 1.00 M LiPF6 in EC/PC/DMC, 5:2:3 (v/v) mixture was also successfully polarized at low, room, and elevated temperatures, with the same 6 A·m-2 applied current density. Previous ex situ experiments using the pulsed-field gradient NMR technique, in conjunction with conductivity measurements, had revealed that ion pairing at low temperature was significantly reduced in electrolyte mixtures where the fraction of high-dielectric solvent was maximized.3 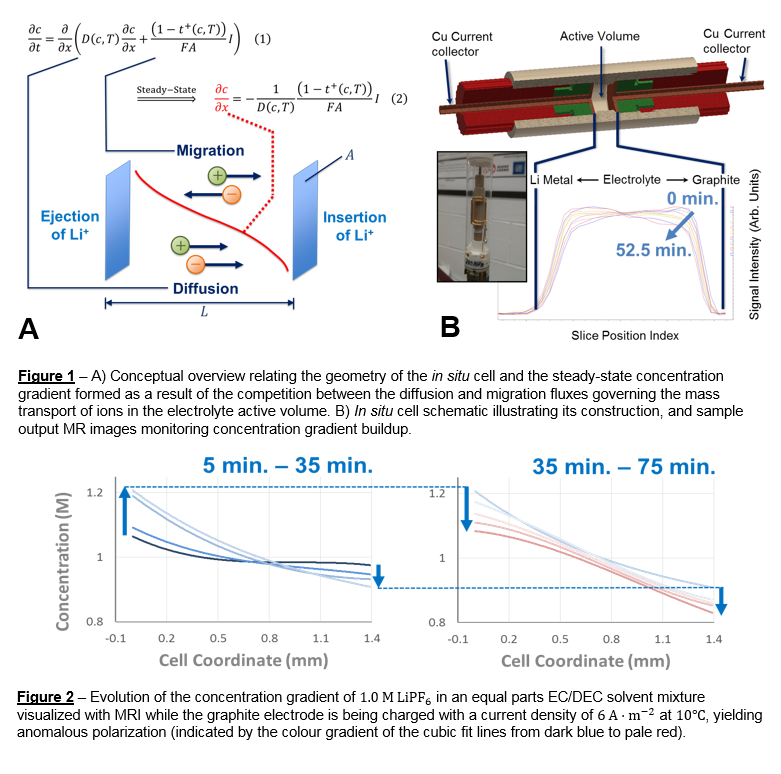