Maryland C (Gaylord National Resort and Convention Center)
K. Xiang (Massachusetts Institute of Technology), M. Tang (Rice University), D. B. Ravnsbaek (University of Southern Denmark), and Y. M. Chiang (Massachusetts Institute of Technology)
LiFePO4 (LFP) has been extensively studied as an exemplar of electrode-active materials that undergo a phase transition during (de)lithiation. The proposed phase transition mechanisms can be categorized as three main types: 1) first-order phase transformation with growth being interface-source-limited; 2) first-order phase transformation with growth being bulk-diffusion-limited; 3) phase-transformation being bypassed by a continuous solid-solution reaction. A recent study has also reported particle-level spatial variations in the (de)lithiation rate, the extent of which depends on the overall charge/discharge rate. [1] Time- and current-rate dependences of the phase transition mechanism may explain why phase boundaries are found in ex situ TEM studies while metastable solid solutions have been reported in operando studies at high rates or high overpotentials. [2-5] What is still missing, however, is how nucleation and growth proceeds across the mesoscale multiparticle ensembles that represent actual battery electrodes. This study aims to understand the mesoscale transformation process.

We studied a series of LiMnyFe1-yPO4 (y=0, 0.4, 0.8) powders with equivalent spherical diameter ranging from 50 nm to 150 nm, primarily using the potentiostatic intermittent titration technique (PITT). Thousands of current responses were collected and then analyzed within the framework of Johnson-Mehl-Avrami-Kolmogorov (JMAK) theory. While JMAK analysis has previously been applied to electrode materials,[6-7] some of its principal assumptions (homogeneous nucleation in an infinite-sized system) are so clearly not satisfied by nanoscale particles that the justification for such an exercise should be questioned. Here, we show for the first time, that the JMAK approach is valid for a mesoscopic system in which secondary particles are composed of well-connected nanoscale primary particles. We show that the Avrami exponent n can be generally expressed as n = a + b*c, where the value of the parameter a describes nucleation kinetics (a=0, instantaneous nucleation; a = 1, constant nucleation rate), b represents the growth dimensionality and c is determined by phase boundary migration mechanism (diffusion- vs interface reaction-limited). In LiMnyFe1-yPO4 (y=0, 0.4, 0.8) samples of varying Mn:Fe ratio and particle size, under different overpotentials and temperatures, we find that the Avrami exponent n systematically varies between 0.5 and 1.5 (Figure 1). These results lead to the following new insights:

(3) Variations in the Avrami exponent indicates a variation in nucleation rate since n = a + 1/2 based on (1) and (2). The nucleation rate decays with time; the decay rate is directly correlated to a nucleation barrier modulated by particle size, composition, overpotential and temperature.

The same analysis was conducted for results obtained on a commercial Li4Ti5O12 (LTO) sample (NEI NANOMYTE® BE-10C) with primary particle size ranging from 40 to 80 nm and micron-sized secondary particles. The Avrami exponent was found to systematically vary from 0.5 to 1.5 as well, indicating b = 1. Since LFP has 1-D bulk diffusion whereas LTO has 3-D, this result suggests that the dimensionality of growth within mesoscale secondary particles is independent of dimensionality of lithium diffusion inside the primary particles. The similarity in results for LMFP and LTO imply that this type of transformation kinetics may be general for nanoscale battery electrodes with electrochemically-induced phase transitions. 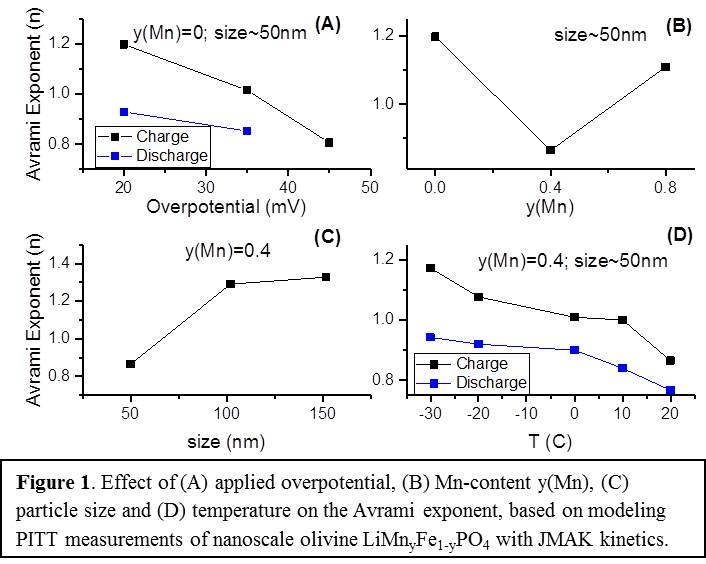