National Harbor 1 (Gaylord National Resort and Convention Center)
A. M. Haregewoin, L. Terborg, L. Zhang, J. Guo, P. N. Ross, and R. Kostecki (Lawrence Berkeley National Laboratory)
Research and development efforts have been focused on improving the performance of existing Li-ion battery systems and developing new systems to various applications. Si based electrodes have high theoretical capacities (nearly 4200 mAh/g) compared to the widely used carbon-based electrodes (372 mAh/g), which makes them a promising candidate to replace graphite electrodes [1]. However, Si experiences substantial volume changes (~320%) during the charging and discharging processes, which lead to the problems of particle cracking, particle isolation, and electrode delamination. This, in turn, affects not only the SEI stability but also results in the loss of electrode integrity. In order to overcome the loss of electronic connectivity and mechanical integrity of the bulk electrode during extended charge-discharge cycles, it is critical to identify an effective polymer binder. Consequently, it is essential to understand the effect of polymer binder on the electrochemical performance for Si/C anodes.

In the current study, we examine the adhesion properties and chemical stabilities of the binder before and during cycling. Thin films of the binder polymers are spin coated onto the B-doped Si (100) wafers to achieve the thicknesses of the same order of magnitude as those calculated for composite electrodes (20 nm). For comparison, thin films of the binder polymers are also spin coated on Cu substrate and analyzed. For adhesion measurement, saturated solutions of polymer binders in NMP (poly(1-pyrenemethyl methacrylate (PPy) and polyvinylidene difluoride (PVDF)) or H2O (poly (acrylic acid lithium (PAALi)) are sandwiched between two 1 cm2 Si or Si/Cu wafers by drop casting. To break down the cell components to Si, binder and electrolyte for electrochemical testing, model electrodes are prepared by spin coating PPy binder onto Si wafers. Electrochemical cycling is performed for pristine, and PPy coated Si (Si/PPy) wafers using 1.2 M LiPF6  in ethylene carbonate (EC): diethyl carbonate (DEC) (3:7 wt.%) solvent systems. The PPy film surface exposed to the electrolyte as well as the substrate/binder interface are analyzed in terms of chemical and morphology changes using various spectroscopic and microscopic techniques.

PPy showed superior adhesion toward Si and Cu. The strong adhesion of the PPy to the Si surface provide improved interparticle connection vs. other binders. Electrochemical testing results of the Si and Si/PPy electrodes are shown in Figure 1. The cathodic current between 2 V and 0.3 V shows the presence of approximately ten times more electrolyte reduction on the PPy coated Si on the first sweep compared to pristine Si electrode. The charge consumed in this region (0.028 C/cm2) is much higher than the charge needed for complete decomposition of PPy (0.012 C/cm2) [2]. Moreover, ex-situ analysis by XAS and XPS depth profiling indicates the electrochemical stability of PPy upon cycling. The induced electronic conductivity of the PPy may exacerbate the electrolyte reduction reactions relative to the uncoated surface. Below 0.05 V, the cathodic current becomes significantly higher on the pristine Si due to the onset of lithiation of the silicon as confirmed by the corresponding delithiation anodic peaks. No similar anodic behavior was observed for the PPy coated Si electrode on the first and following cycles. However, electrode polartization due to charge and/or mass transport limitation through the PPy film can be responsible for this effect. The ex-situ FTIR analysis indicates the major products of the reduction reactions on the first few cycles have alkyl silane (SiOCH2CH3 and SiOCH3) functionality. We propose that these products come from the selective reduction of DEC at the Si/PPy interface. These reduction products do not function as SEI since they appear to show inferior passivating behavior of Si/PPy as compared to Si wafer and block Li+ insertion into the Si lattice.

We have learned that, to be effective in a composite electrode, PPy needs to act as a “glue” between particles (Si or graphite) and not a “coating” of the Si particles, and electrode preparation should be tailored this function. By understanding the surface change and their significance regarding cell life, effective new binder candidates can be developed, which can lead to more efficient LIB systems.

This work was supported by the Assistant Secretary for Energy Efficiency and Renewable Energy, Office of Vehicle Technologies of the U.S. Department of Energy under Contract No. DE-AC02-05CH11231, under the Applied Battery Research for Transportation (ABR) Program and Award Number DE-EE0006443. 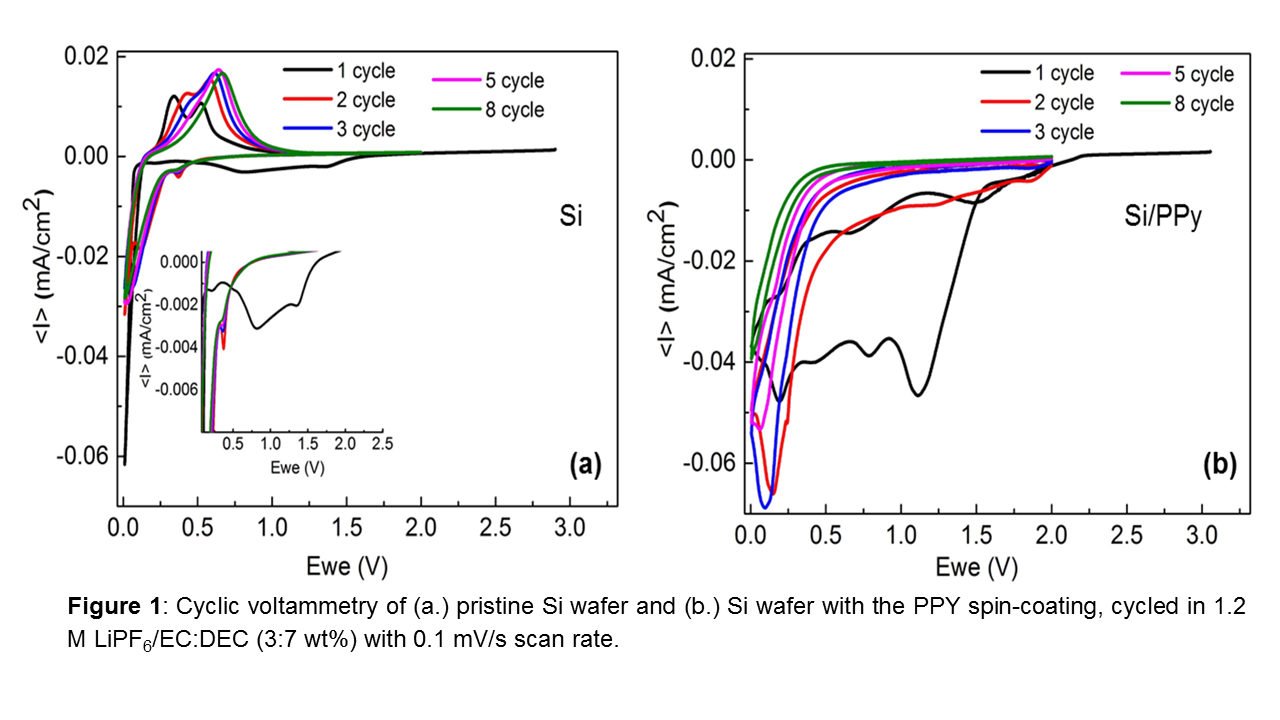