There has been increasing attention to electrochemical energy conversion devices using oxygen electrodes in alkaline media such as fuel cells, metal−air rechargeable batteries, and water-splitting devices. Because of the sluggish kinetics of the oxygen electrode reactions, many researchers have been exploring cost-effective materials which can catalyze both/either oxygen reduction reaction (ORR) and/or oxygen evolution reaction (OER). Among various kinds of catalysts, a family of perovskite-type compounds have been extensively studied because of its structural and compositional flexibility. In order to enhance the catalytic activity of perovskites, researches based on the choice of cation elements and their compositions has been extensively conducted.1 On the other hand, those based on the choice of anion elements and their compositions has been rarely conducted. These days, some research groups report that mixed-anion catalysts exhibit ORR and/or OER activities,2,3 suggesting that “anion blending” can be a great tool for enhancing catalytic activity of perovskites. Therefore, the present work focuses on the measurement of ORR and OER activities for mixed-anion perovskites. Herein we used Sr2CoO3Cl and its related materials.4

Sr2CoO3Cl and Sr3Co2O5Cl2 were synthesized by a solid-state method. Sr2Co2O5 precursor was firstly prepared by heating a stoichiometric mixture of SrCO3 and Co3O4 at 1273 K in air followed by quenching in liquid N2. Next, stoichiometric amounts of Sr2Co2O5, SrCO3, and SrCl2·6H2O were mixed and heated at 1123 K in air. For benchmarking catalysts, LaSrCoO4, which has the same crystal structure and valence state of cobalt ion, LaCoO3, which is a well-known single-perovskite catalyst with the same valence state of cobalt ion, and Ba0.5Sr0.5Co0.8Fe0.2O3-d (BSCF), which is known as a highly-active OER electrocatalyst, were used. ORR and OER activities of the samples were carried out by using three-electrode electrochemical cell with rotating disk electrode (RDE) setup. Composite electrodes consisting of perovskites, Vulcan XC-72 (Cabot), and AS-4 (Tokuyama) were formed on a glassy carbon RDE and were used as the working electrode. Pt wire, reversible hydrogen electrode (RHE), and 1.0 mol dm-3 KOH solution were used as the counter electrode, the reference electrode, and the electrolyte, respectively.

From scanning electron microscope-energy dispersive X-ray spectroscopy, the oxychlorides had a particle size of 1-10 μm with almost ideal atomic concentrations. X-ray diffraction patterns of the oxychlorides were almost identical to those in ICSD database. While the ORR activity of LaSrCoO4 was negligible, that of the oxychlorides was as high as that of LaCoO3, indicating that the mixing of oxide and chloride ions was effective to add the ORR activity. Fig. 1 shows OER polarization curves of perovskite catalysts. Surprisingly, the OER activity of Sr2CoO3Cl was as high as that of BSCF, proving that “anion blending” is a powerful tool to enhance the OER activity. Roles of chloride ion in improving ORR and OER activities will be discussed in the conference. 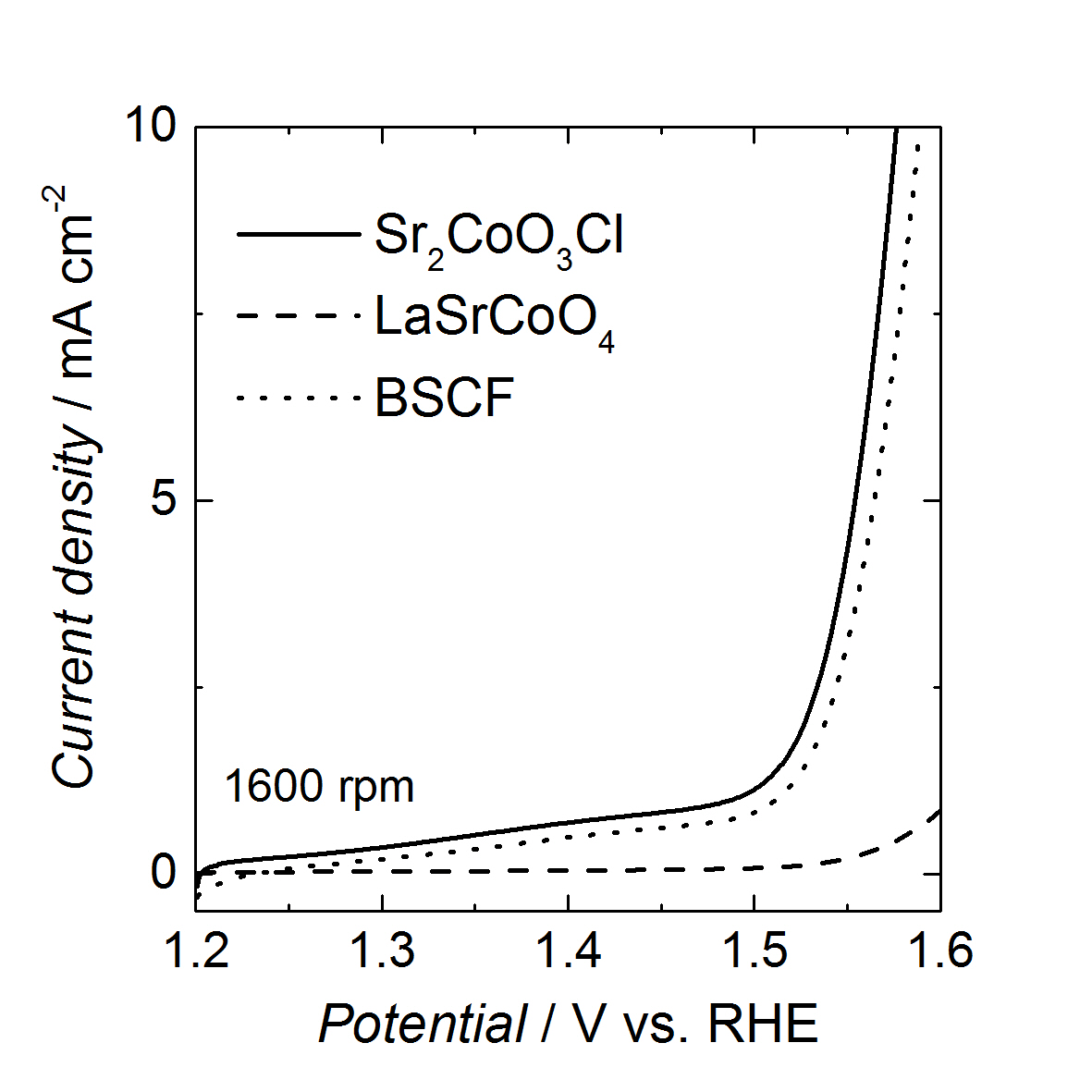