Metal-ferroelectric-metal (MFM) capacitors were prepared on heavily doped Si substrates. Metal layers were made of TaN film prepared by sputtering the Ta target in Ar and N2 mixture gas. Hf-Zr-O films were prepared by sputtering the HfO2 and ZrO2 targets simultaneously. The metal composition was controlled by shuttering the targets frequently within 0.5-nm-thick of deposition cycle. Following to the deposition of bottom TaN (10 nm), Hf-Zr-O, and top TaN (10 nm) films in sequence, the samples were annealed in a vacuum condition between 600 and 800 degrees Celsius. Device fabrication was finished by photolithography and dry etching.

A result of electrical characteristics of an MFM capacitor, made of 10-nm-thick Hf-Zr-O film (Hf:Zr=50:50), is shown in the figure. Polarization-voltage characters (blue curves) are shown with the left axis. Polarization becomes prominent when the voltage swing exceeds +1 and -1 V. The maximum voltage reaches +3 and -3 V in order to obtain a fully saturated behavior. The remnant polarization and the coercive field are calculated to be 21.9 μC/cm2 and 0.97 MV/cm. These values are reasonable with the results in preceding reports. Current-voltage characters (red curves) shown with the right axis were measured using another die on the same wafer. The leakage current increases gradually with the applied voltage, and the breakdown occurs at around 4 V. The breakdown voltage is larger than the maximum voltage for the saturated polarization, but it is not large enough for the stable operation. In the application of this ferroelectric oxide, we must pay attention with this balance.

Hafnium oxide ferroelectric films are not single crystal and single phase, but are poly crystals and contain ferroelectric and dielectric phases. Thus leakage current and dielectric breakdown might be strongly correlated with the natures of grain boundaries and low-k grains in the films. These issues were not focused when the high-k films were applied in an amorphous phase. The application of new properties in crystalline films has brought us a new challenge of engineering the microstructures. 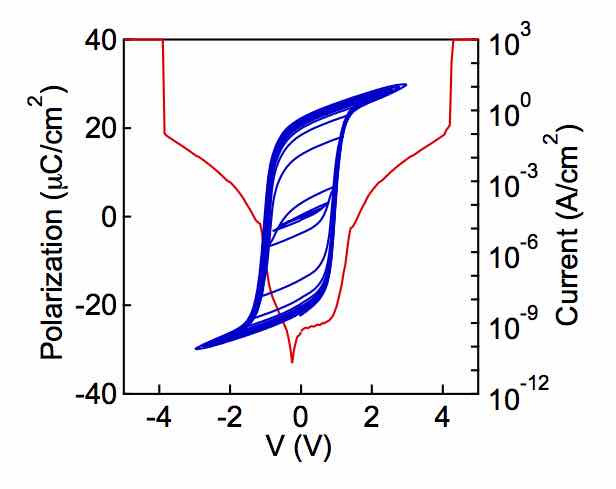