Prince George's Exhibit Hall D/E (Gaylord National Resort and Convention Center)
M. Takemoto (Kobe Univercity), H. Maki, M. Matsui, and M. Mizuhata (Kobe University)
Lithium ion battery (LIBs) is indispensable to various electrochemical devices in practical use such as a cell phone, electric vehicle due to its high energy density, high voltage. Although the extended use of LIBs technology, batteries which have higher capacity and can stand up to high speed charge/discharge than those of LIBs are demanded. Various studies have reported that the liquid phase occurring adjacent to solid particles has an anomalous behavior when compared to bulk solution[1]. Solid-liquid interface is performed as a base in charge-discharge of LIBs, so an elucidation of liquid phase properties of solid-liquid interface in the non-aqueous electrolyte solution system is important for improving the performance of energy storage devices such as LIBs. In addition, properties of the highly-concentrated electrolytes for performance improvement of LIBs are attracted. In this study, NMR spectroscopic behavior of non-aqueous LiClO4 solution mixed with fumed oxide nanoparticles as model system of gel electrolyte for LIBs, and their dynamic properties and influences to solvent molecules from solid phase or Li+ ion by measurement of the spin-spin (T2) relaxation time and electrochemical measurement.

In 1H NMR spectra, a broad signal was confirmed under the existence solid-phase. It was shown that the dynamic property of PC molecules largely decreased in comparison with the case only for liquid phases. In PC/FS and PC/FA system, 1H NMR spectra shifted to higher magnetic field with the decrease of liquid content. For the shielding effect to the 1H nucleus of the PC molecules by the surface charge of fumed silica, a signal continues to shift to highly-magnetic field as a content of solid-phase increases. This result suggested that the apparent charge densities around the proton of PC molecules increased by fumed silica because fumed silica has a negative charge. In alumina dispersion, NMR signal shifted to higher magnetic field than that of fumed silica. From this result, alumina gives more influence on dynamics properties of liquid phase. A similar result was observed in 1-3 mol L-1 LiClO4/PC and solid coexisting system.

T2 in solid-liquid coexisting system is also shown in Fig. 1. From Fig.1, in all systems, the T2 value decreases because the dynamics of water molecules of the liquid phase decrease. The T2 value decreased in order of PC/FA, PC/FT, PC/FS system. The influence of the solid surface to solvent mobility in fumed alumina dispersion is the least of the three. This result supports a signal of the NMR and the result of 1H qNMR measurement.

This study was supported by the JST Core Research for Evolutional Science and Technology (CREST). 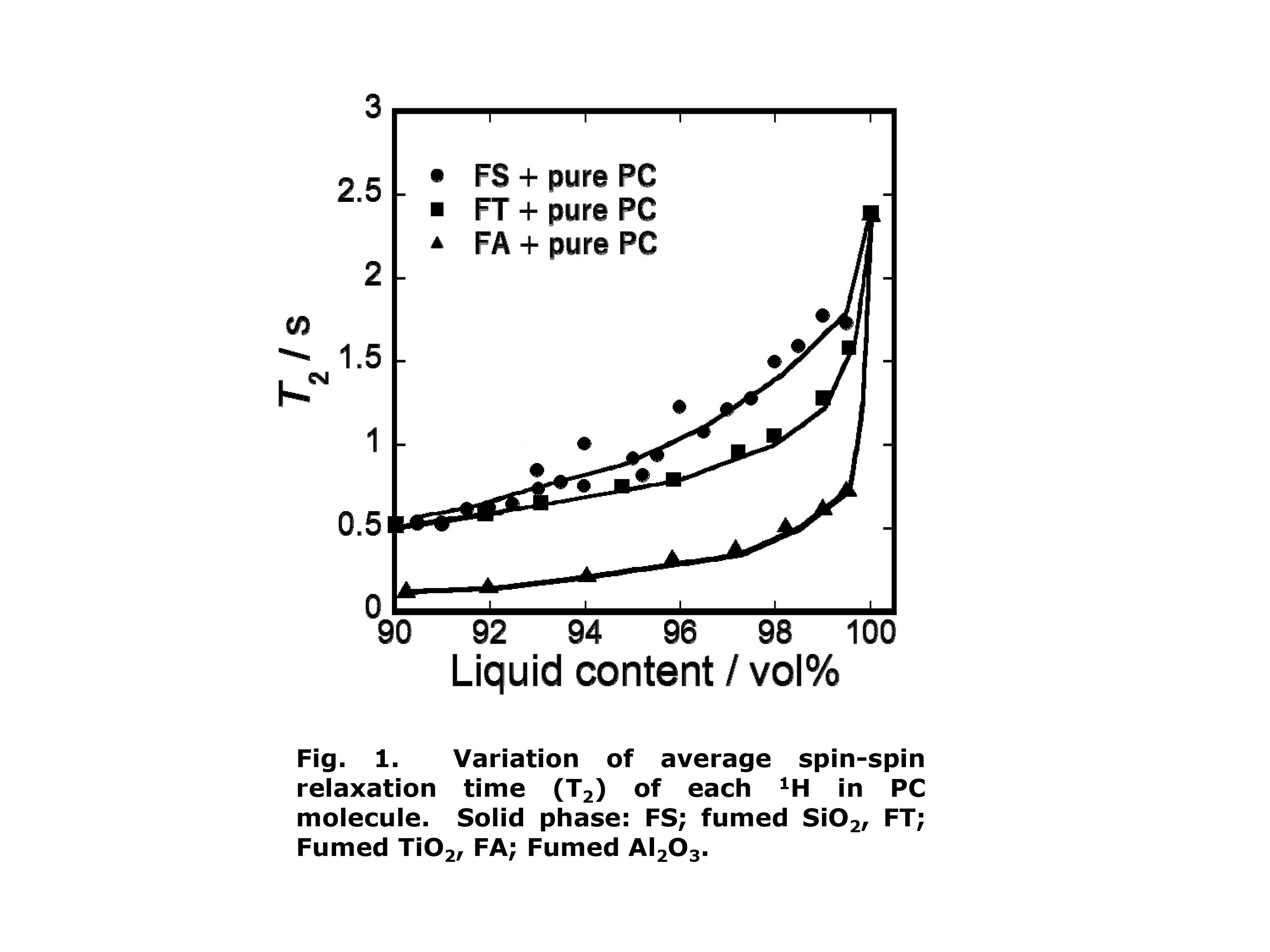