National Harbor 10 (Gaylord National Resort and Convention Center)
A. Lotfi (Georgia Institute of technology, Georgia Tech Research Institute), A. Mahdavifar, D. Struk (Georgia Institute of Technology), J. R. Stetter (SPEC Sensors, LLC), M. Navaei (Georgia Tech Research Institute), and P. J. Hesketh (Georgia Institute of Technology)
This paper reports on characterization and optimization of a low-noise Thermal Conductivity Detector (TCD) for detection of ammonia. Ammonia is a highly toxic agent and is widely produced by of chickens in a chicken farm. There are studies that show the presence of ammonia decreases the quality and quantity of egg and meat production, and may inhibit growth in cell lines. Research has shown that high level of ammonia will create about 5-10% runts in a flock [1]. Therefore, accurate detection ammonia is important issue for food quality control and also labor safety. The commercially available ammonia sensors on the market often have short battery life, baseline drift, selectivity problem, false alarms and need frequent recalibration. Currently most ammonia sensors rely on the chemical interaction of the gas and a specific material which chemical properties changed by the gas. The drawbacks of these sensors are the reliability of the sensors under different environmental conditions and limited life-time. On the other hand, gas sensors which primarily use physical properties of the gas to sense, such as Thermal Conductivity Detector (TCD) is potentially more stable [2].

The working principle of thermal conductivity detectors is based on relating bridge resistivity to its temperature, and bridge temperature depends on the heat loss to the surrounding gas. Here we present a comprehensive COMSOL model to study the effect of the micro-bridge geometry and the heat transfer phenomenal through the gas and substrate. The purpose of the geometry design is to reduce the heat loss to the substrate at the micro-bridge anchors, to improve the efficiency of the sensor, and increase the heat loss through the gas phase to improve the detection limit. For the purpose of this study, we investigated the effect of three differed designed depicted in figure 1. Based on the simulation data, the micro-bridge with the uniform cross-section shows the highest ratio of heat loss through the gas relative to total power of the sensor. This has improved the sensitivity of the sensor by 18% for gases with low thermal conductance such as ammonia.

In conclusion, we have analyzed operation of micro-bridge for robust performance to detect ammonia, which has comparably similar thermal conductivity to the nitrogen. Robust sensitivity of gas detection is also being investigated by 3-Omega techniques, for read-out circuit, increase in the working temperature of the sensor and having better Signal-to-Noise Ratio (SNR). There is also more room in improvement of material properties including having higher thermal coefficient resistivity. 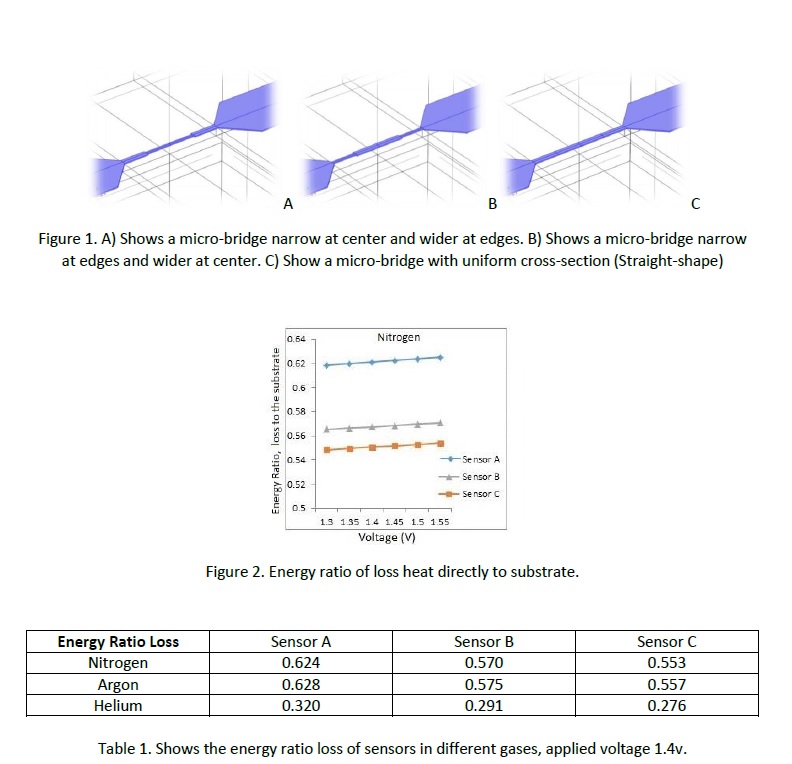