Chesapeake 6 (Gaylord National Resort and Convention Center)
A. El kharbachi, V. Thangavel, T. K. Nguyen, K. H. Xue, M. Quiroga (LRCS (CNRS&UPJV), Réseau sur le Stockage Electrochimique de l’Energie RS2E), A. A. Franco (LRCS (CNRS&UPJV), RS2E, ALISTORE-ERI, Institut Universitaire de France), and D. Larcher (LRCS (CNRS&UPJV), RS2E, ALISTORE-ERI)
The study of the response of Lithium Ion Batteries (LIBs) to fast transient power solicitations is a crucial topic which may depend on the specificity of each application. In fact, LIBs can be present in different connection-configurations and their response performances will depend on the nature of the electrical engines, high dynamics power regulators and other electrochemical systems devoted to battery recharging [1]. One of the key aspects in the resulting transient response of LIBs is the ionic transport phenomena taking place at the interface between the liquid electrolyte and the solid active material (electrochemical double layer –EDL– region) [2]. However, characterization of the capacitive interfaces, as well as dynamic properties, as function of the electrolyte composition in Li-ion batteries remains a challenge owing to the change in the electrode/electrolyte environment from one cell component to another.

In this work, we present an investigation, combining experimental and computational modeling approaches, of the electrolyte/active material interfaces with focus on the EDL using LiFePO4 as a model electrode. In particular, the aim is to track the effect of the electrolyte solvent composition on the transient electrochemical behavior of the electrodes. A successful Swagelok® type setup probing interface liquid modifications is adapted for that purpose, in which the change of the solvent is made in-situ without cell disassembling. Such experimental cell allows the capture on how the electrolyte composition can affect the electrode potential dynamics. Coupling experimental results to computational modelling is addressed first for binary carbonate-based solvents (EC/DMC) with emphasize on the stability of the measurements using impedance spectroscopy. Mechanistic insights on the EDL structure and dynamics are also provided and discussed for ternary systems (EC/PC/DMC).

This work is funded by the French National Research Agency (ANR) through the project “ALIBABA” under the contract reference ANR-11-PRGE-0002. 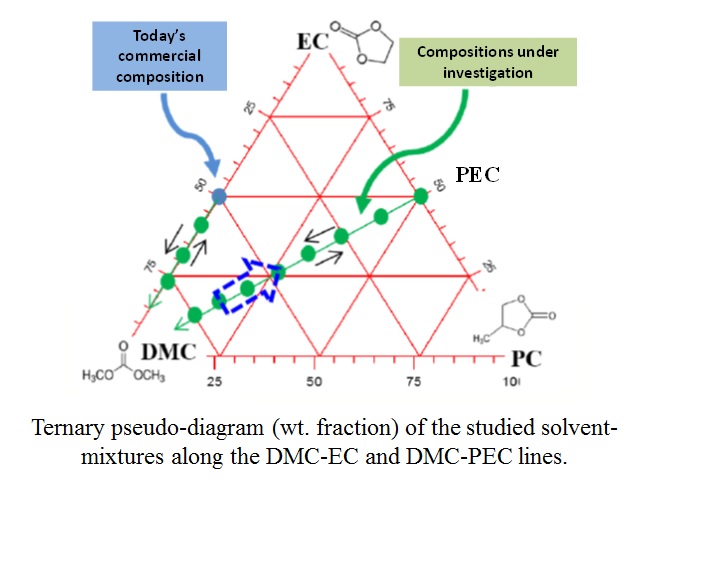