149
Surface Reactivity of a Tin Electrode in Organic Carbonate Electrolytes

The investigation on the mechanisms governing the function and operation of battery materials, interfaces and interphases, is indissolubly linked to the successful obtainment of long life and high performance LIB systems.

Interfacial reactions, which include lithium ion insertion/extraction, decomposition of the electrolyte and formation of a solid electrolyte interphase (SEI) layer determine the irreversible capacity, cycling ability and lifetime of LIBs [1,2].

Among the high energy density anode materials candidates, tin has attracted significant attention as a Li-alloying anode due to its high specific capacity (993 mAh g-1) as compared to graphite electrodes (372 mAh g-1) and high volumetric capacity (2020 mAh cm-3) comparable with the one of silicon (2400 mAh cm-3) [3]. However, large irreversible capacity observed during the first cycle, volumetric changes of Sn particles during the (de-)alloying process, particle disintegration and loss of electronic contact are responsible for the rapid degradation of Sn-based anodes in LIB systems. [3-5].

In addition, tin presents a strong catalytic activity toward the organic-based electrolyte being responsible of a poor electrode passivation leading to continuous electrolyte reduction upon cycling [5-7].

In this scenario, it is fundamental the understanding of the kinetic processes occurring at the interphase to undertake a rational and basic study on the SEI components properties.

To gain insights into the mechanism of the electrolyte decomposition and SEI layer (re)formation upon cycling we investigated the role of single solvents and additives into the electrolyte. The role of LiF and Li2CO3 in the SEI has been investigated through electrochemical tests, such as cyclic voltammetry and galvanostatic polarization and FTIR surface characterization.

Furthermore, a comparative study to investigate the effect of oxide species on tin surface is shown. The presence of an oxide layer plays an important role in the surface reactivity toward solvent decomposition. Galvanostatic polarization of a tin electrode at different current densities (Fig.1) shows that the electrode potential tends to stabilize at around 1.6V at low current densities, i.e. 20 µA cm-2, which indicates a continuous electrolyte reduction process. While at higher current densities a fast voltage drop to the alloying region (0.6-0.4 V) is observed.

Interestingly, the presence of an oxide layer on the tin surface limits the electrolyte reduction and induces an improved stability of the SEI layer.

The results confirm our earlier observations that the surface film on Sn does not effectively prevent continuous electrolyte reduction and that a large fraction of the reaction products dissolve in the electrolyte. In addition, we found that these detrimental electrocatalytic processes could be suppressed by changes of the electrolyte composition (solvent and salt additives), or by using surface protective oxide layers.

This work was supported by the Assistant Secretary for Energy Efficiency and Renewable Energy, Office of Vehicle Technologies of the U.S. Department of Energy under Contract No. DE-AC02-05CH11231, under the Applied Battery Research for Transportation (ABR) Program and Award Number DE-EE0006443. 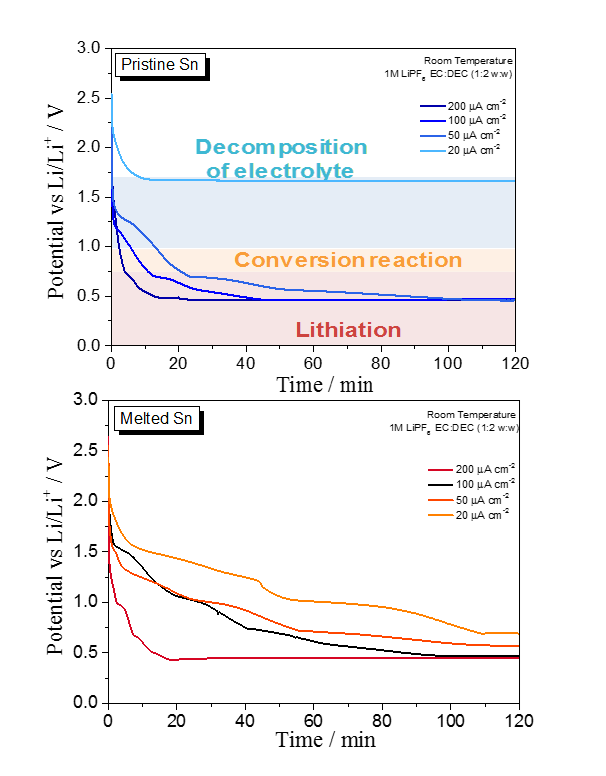