Development of a reliable electrochemical cells is thus of a prime importance when studying battery materials in in situ or operandomode during cycling. This is never an easy task, since the design of such cells has to be adequate to the technique of a choice and meet all necessary requirements (i.e. the use of a Be window for operando X-ray diffraction measurement to ensure “transparency” to the X-ray beam). However, once a proper design is found, the surface, the bulk, the interfaces, and finally the combination of those can be studied and lead to the elucidation of the reaction mechanisms, thus further improving the battery technology.

Unfortunately, in most cases the electrochemical cells used for operando measurement are not ideal and suffer from low internal pressure (i.e. poor contact between the electrodes). It shortes the lifespan of the cell and as a consequence most of the studies presented in the literature focus on the first/second cycle. Herein we present different cell designs developed in our laboratory and used for operando/in situ studies. Having overcome earlier mentioned obstacle our operando/in situ cells are able to sustain more than 100 cycles and simultaneously to perform structural studies such as X-ray and neutron diffraction. For the latter one, we also developed a new set-up called stroboscopic mode. It allows operando study of the batteries that are cycling at very high rates (e.g. 10C) with a neutron patterns collected each 1 s along 200 cycles and more.

All these efforts lead us closer to understand the aging phenomena occurring during cycling and to gain the insights into the failure of both new battery technologies, such as 5 V cathode materials, and more academic systems like Na-ion and Li-S batteries.

An example of the results obtained from our advanced neutron diffraction cell is shown in Figure 1. Based on the design adapted from an 18650 cell, we cycled 4.5 g of active material, 5 V cathode spinel LiNi0.5Mn1.5O4, in full cell configuration versus graphite counter electrode over 120 cycles to study the aging mechanisms. The neutron diffraction patterns were collected during the 1st and 120th cycle. As expected, along the first cycle (Figure 1a) we detected all the different stages of graphite lithiation (Figure 1b). Interestingly, after 120 cycles we were unable to detect LiC6. Thus, we concluded that the fading of the cell is mainly caused by the lack of lithium in the system.

Another example might be Li2MnO3 (Figure 1c). It is known that the optimal cycling of this active material requires the activation at elevated temperature. We modified our X-ray diffraction cell to be able to cycle it at temperatures higher than 25°C and thus to study the activation mechanisms of Li2MnO3.

Acknowledgment: The authors would like to express their gratitude to Dr. Denis Sheptiakov from HRPT, SINQ, PSI beamline and fruitful help/discussions regarding neutron experiments. Mr. Hermann Kaiser and Christoph Junker are acknowledged for their help in all technical aspects of this study and the development of the cells. SAFT, SNF and SCCER Heat and Storage are thanked for financial support. 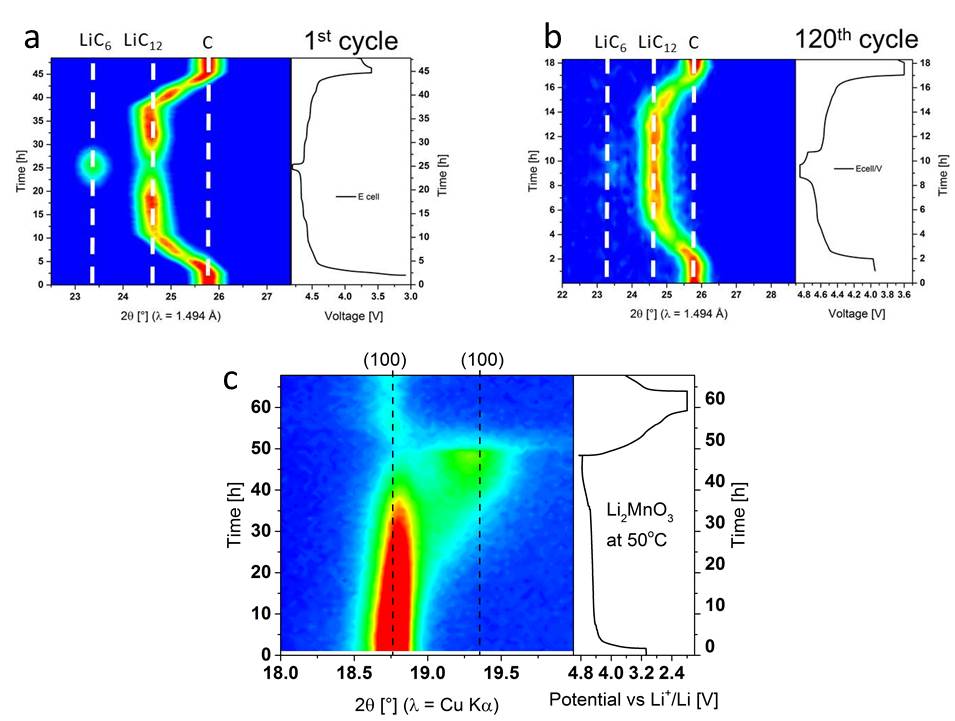