It has been shown previously that an alternative to plasmonic metals in the mid-infrared-THz spectral ranges are polar dielectrics such as silicon carbide, whereby such large, sub-diffraction limited, localized electromagnetic fields can be sustained through the optical stimulation of plasmon-like surface phonon polaritons (SPhPs).  Unlike plasmons, these SPhP modes are due to atomic displacements in polar semiconductors, and thus do not require free carriers to interact with the electromagnetic radiation. Because of this, SPhPs exhibit exceptionally low optical losses.  Initial investigations into SiC for SPhPs began in the early part of the last decade and proof-of-principle experiments demonstrated that both localized and propagating SPhP modes could be supported.  Recently, our group has demonstrated the first fabricated localized SPhP nano-resonators.   The nanostructure arrays are composed of SiC nanoresonators having geometries that are 10 to 40 times smaller than the resonant wavelengths, which occur in the 10.3-12.5 um spectral range.  The structures used varied in height from 150-1500 nm-tall nanopillars fabricated from semi-insulating 6H- and 4H-SiC and had diameters ranging from 150-1000 nm and interpillar separations between 20-10,000 nm.  The low optical losses resulted in exceptionally narrow resonance linewidths of 3-24 cm-1, corresponding to quality factors in the 40-300 range, which is almost an order of magnitude greater than what is possible with silver (Q<40).  Coupled with theoretical simulations of the electromagnetic fields, we have achieved an understanding of the local electromagnetic field distributions and intensities at such extreme confinement as a function of nanostructure size and interpillar separation.   This allows us to identify the optical modes involved in the resonances and their optical selection rules.  Our work shows that extremely small, high-quality, optical resonators are possible when we use SPhPs instead of surface plasmons in metamaterial designs in the IR.  Unlike metals that are limited to the UV-visible, a larger wavelength range is possible with these materials as the phonon modes in polar semiconductors depend on the masses of the constituent atoms and their bond strength. 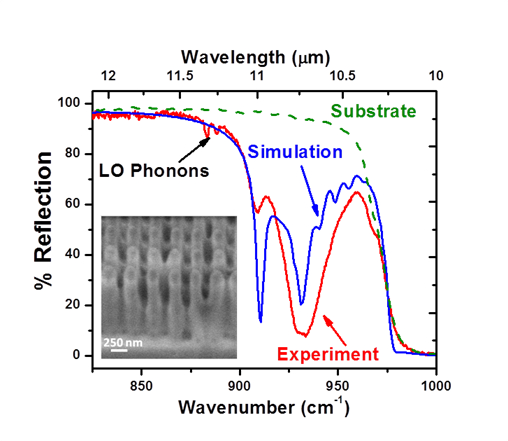