State-of-the-art NPMCs have typically been synthesized from highly heterogeneous precursors [1,3,4], making understanding of the ORR active site in such catalysts particularly arduous. Catalysts based on graphene and graphene-oxide (GO) are more homogeneous and possess properties such as good chemical stability, excellent conductivity, and more importantly, can potentially be functionalized in a controlled manner [5]. GO inherently has a high defect density and can be modified with various functional moieties, e.g.carboxyl, hydroxyl, and epoxy groups using various synthesis techniques such as Hummer’s or Hoffman’s methods. The desire to have a high defect density arises from the possibility that defect sites may serve as niches for the chemical doping of heteroatoms, such as nitrogen (N) that have been proven to play a critical role in the overall performance of NPMCs. Further, the N-doped sites might serve as anchors for the coordination of transition metal atoms such as Fe, leading to the formation of the ORR active sites.

In this work, we have synthesized GO using different chemical routes and, subsequently, doped it with ammonia at various temperatures (500oC-900oC). Figures 1A and 1B display the respective SEM and HR-STEM images of the synthesized N-doped GO. The images indicate the preservation of graphene sheets after N doping, however, some amorphous content can also be seen in the sample. Figure 1C shows the electrochemical performance of the synthesized catalysts in oxygen reduction reaction measured using RDE. In a 0.5 M H2SO4electrolyte, a half-wave potential of 0.70 V and low peroxide formation were obtained. Conversely, in a 0.1 M NaOH electrolyte a half-wave potential of 0.85 V was observed. The catalyst is relatively stable in acidic conditions over 2000 cycles. A detailed ICP-MS study identified ppm levels of Mn and Fe in the sample, possibly due to the intrinsic GO synthesis method used. Results obtained using other characterization techniques, such as Raman and XPS, will be presented to further understand the role of the metal and nitrogen doping in the performance of GO-based catalysts.

These first results indicate high performance of GO-based NPMCs in both acidic and alkaline media. Although, we have demonstrated effective oxygen reduction activity and have a better understanding of GO-based catalysts, we are now focusing our efforts on the synthesis of the model GO-based catalysts, free of any metal contaminants. 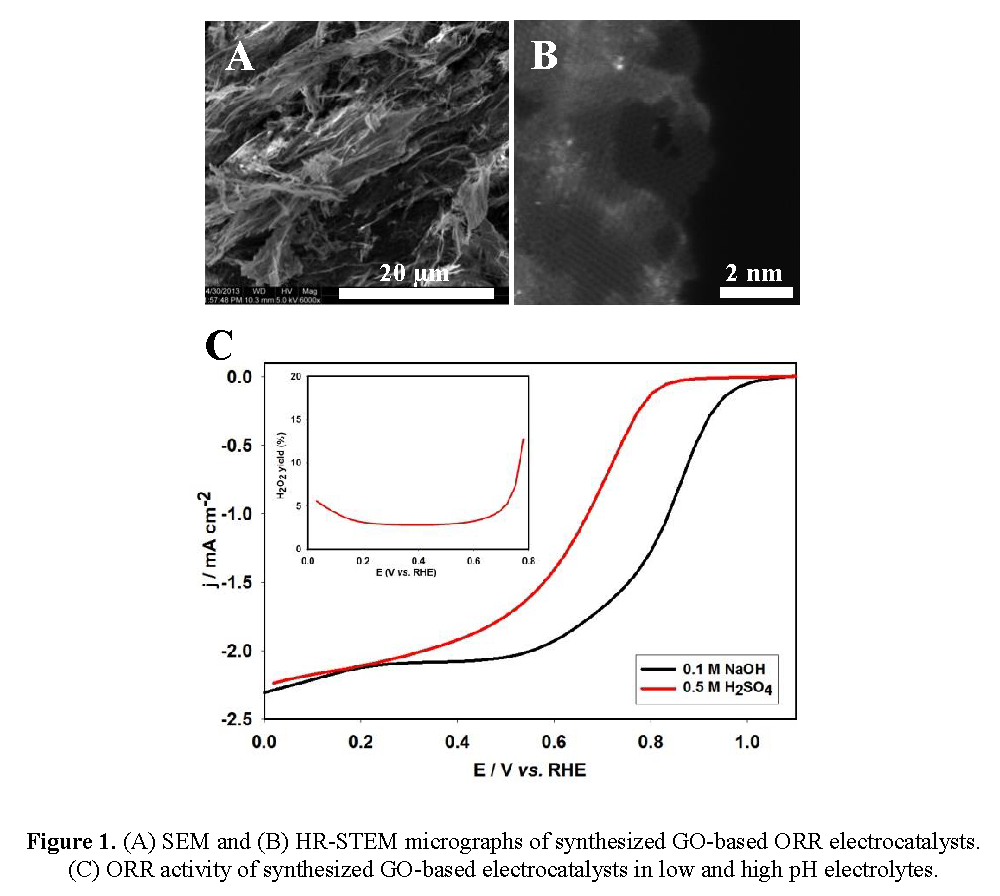