Oxygen reduction plays a crucial role in numerous biological processes and is also a half-cell reaction in electrochemical power sources, such as polymer electrolyte fuel cells (PEFCs) or metal/air batteries. In the quest to replace expensive and scarce platinum used as oxygen reduction catalyst in PEFCs,1various alternative electrocatalysts have been explored, including transition metal porphyrins, which frequently participate in biological cycles, which involve oxygen reduction.

Corroles are a class of corrin based macrocyclic compounds. In spite of similarities between transition metal corroles and porphyrins, there are also notable differences between these two classes of complexes. The differences in some of their properties result from different charges and symmetries of the ligands (Fig. 1a and 1b), which directly affect the electronic environment of the metal and thus its potential activity in catalytic processes.

Elucidation of the catalytic activity of [5,15‑C6F5)‑10‑(p-OMePh)Corrole]M (Fig. 1c), where M=Cu, Fe, Co, in electrochemical reduction of oxygen was a subject of the present study.

Figure 2 presents RRDE voltammograms of oxygen in 0.5 M H2SO4 obtained for comparable loadings of monomolecular copper and cobalt corroles and dimeric, μ-oxo bridged iron corrole.  As seen in Fig. 2, the overall catalyst activity increases in the order Cu < Fe(μ‑oxo) < Co. However, none of the catalysts exhibited a high selectivity for the desired four electron reduction of oxygen to water. The average number of electrons transferred to a single oxygen molecule was found to be 2.0 (only H2O2 generated) for the Co corrole and 2.8 (60% of O2 reduced to H2O2) for both Cu and Fe corroles.

A strong interaction was detected between oxygen dissolved in solution and μ-oxo iron corrole in the unreduced form. The free energy of the adduct formation was similar to that previously determined for pyrolyzed Fe-polyaniline oxygen reduction catalysts.3However, the kinetics of the reaction was significantly faster than that for the pyrolyzed catalyst.

Financial assistance from the University of California and the Haas Scholar Progam (B.J.M) is gratefully acknowledged. 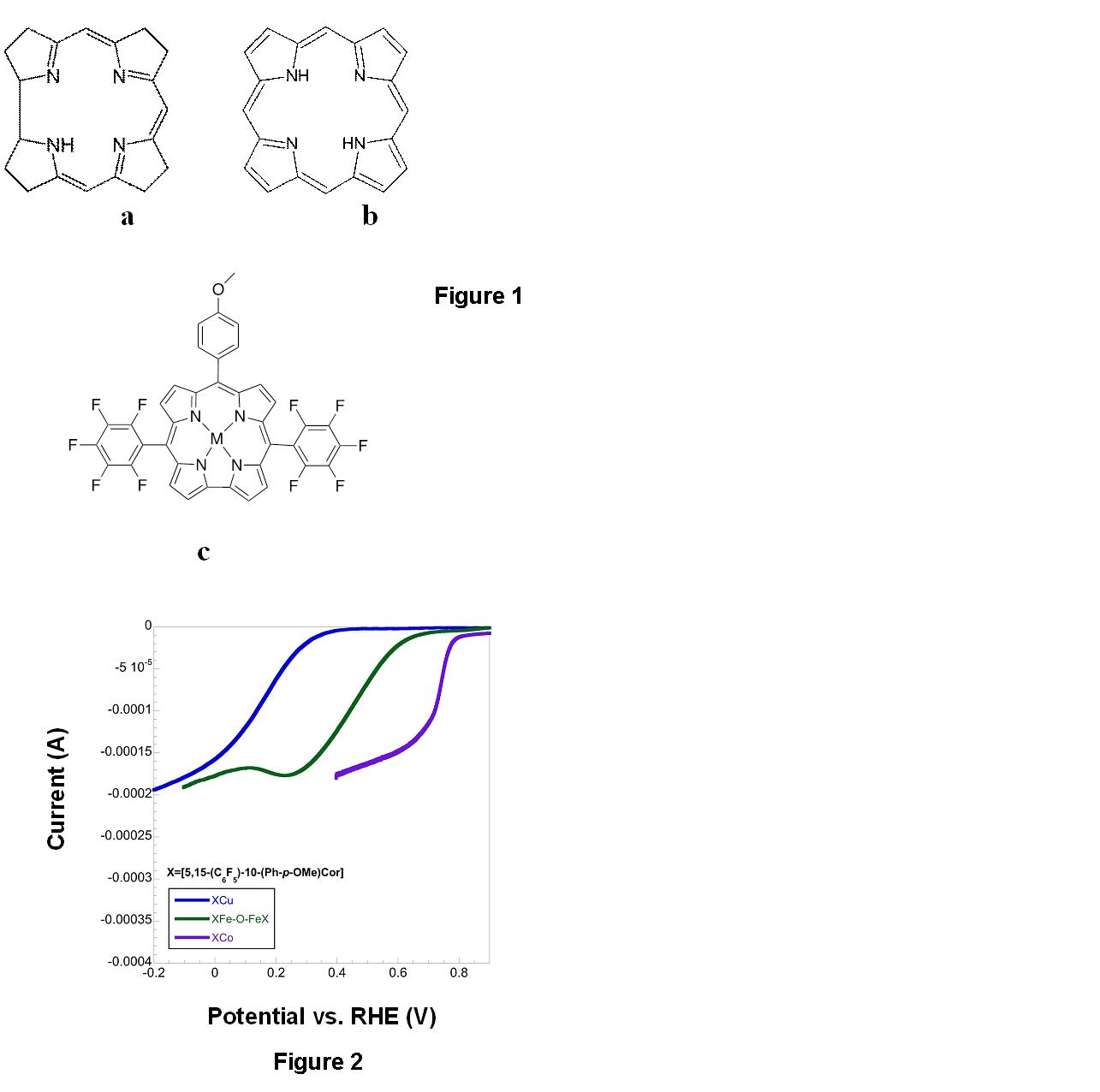