The surface cleanliness is one of the factors affecting (hetero-) epitaxial quality. Clean starting surfaces can be obtained by a high temperature H2-bake (T > 800 °C). [1] Surface reflow during these high temperature bakes can significantly impact the integrity of small structures, e.g. causing corner rounding of FINFET structures. [2] As the clean starting surface can no longer be obtained by the H2-bake at relative high temperatures, more stringent requirements are put on the pre-epi clean and on the impact of queue time between wet-chemical clean and epitaxial growth. We have evaluated the re-oxidation of H-terminated 300 mm Si surfaces in a non-purged FOUP compared to an EBM purged FOUP while the FOUP is open and docked to the factory interface.

Re-oxidation or degradation of the H-terminated Si surface has been evaluated by capping the surface with an epitaxial-grown 80nm Si-cap/80nm Si0.8Ge0.2 bilayer. The H-terminated surface was created in a separate step before the epitaxial growth by applying a thermal treatment in H2 in a conventional ASM Epsilon3200 epi reactor. The Si wafer was unloaded in between the thermal treatment and the Si-cap/SiGe epitaxial growth step. This procedure offers the most-controllable scheme for creating a H-passivated surface but the learnings are also applicable to wet-chemical pre-epi treatments.  The Si0.8Ge0.2 / Si substrate interfacial cleanliness was evaluated at the center of the wafer by SIMS (Fig. 1). The EBM purged FOUP shows a lower interfacial degradation compared to the standard FOUP. The uniformity of the surface degradation has been investigated by surface light scattering (data not shown). While the light-scattering intensity and its range increased significantly after queuing for 1hr in a non-purged FOUP, this increase was suppressed when using the N2-purged FOUP. The light scattering measurements also show that the epitaxial quality is better in a N2-purged FOUP compared to a non-purged FOUP but degraded compared to the loadlock reference.

Figure 1: Degradation of the Si0.8Ge0.2-on-Si interface as measured by SIMS. The interfacial oxygen concentration is plotted as a function of the queuing condition. 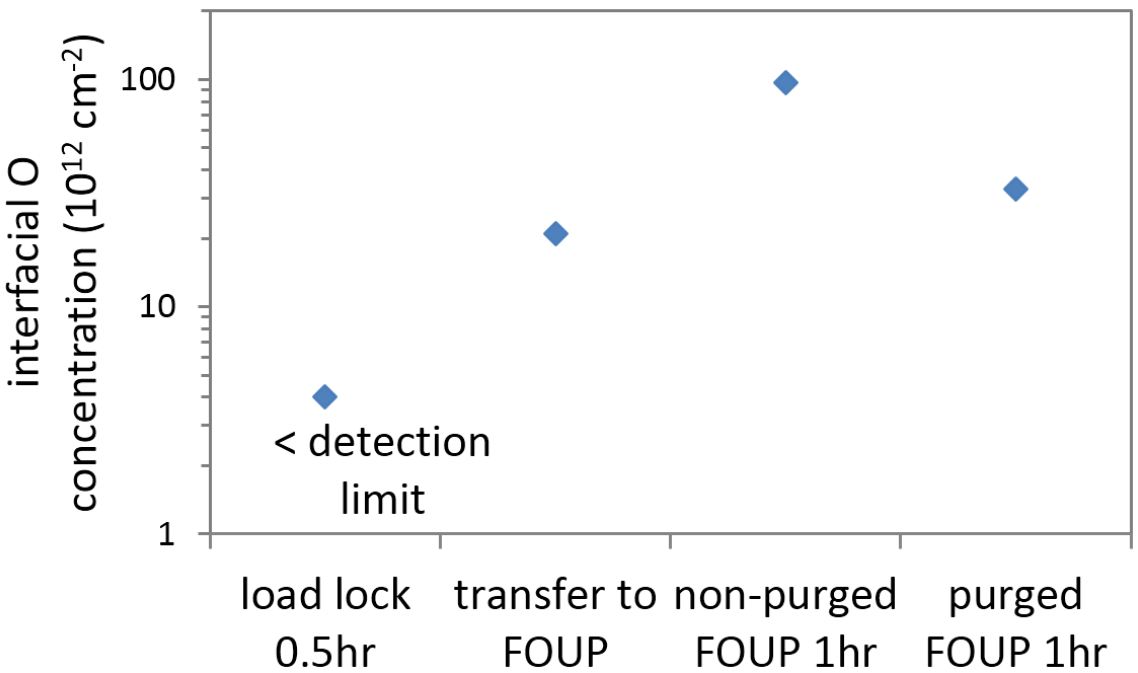