Ge has emerged as a viable candidate to augment Si for CMOS and optoelectronics. First, the lower effective mass and lower valley degeneracy of Ge could alleviate the problem by providing a higher source injection velocity, rendering higher drive current and smaller gate delay in MOSFETs [2]. Second, Ge has a larger absorption coefficient than Si in the telecommunications wavelength range (1.3-1.55 µm), which makes it attractive for integration of monolithic optical components for the use in optical interconnects. Third, lower processing temperatures allow 3-D integration of Ge on Si.

Over the past decade many of the key Ge-based constituents of an on-chip optical interconnect system, such as high-performance photodetectors and modulators, have been demonstrated on a silicon-compatible platform. We have demonstrated p-i-n [3] and metal–semiconductor–metal (MSM) photodetectors [4] in Ge grown on Si with excellent quantum efficiency and responsivities at a wavelength of 1.55 µm. Dark current, a concern for Ge photodetectors due to its small bandgap, has been mitigated by using electrodes with asymmetric work functions in MSM detectors [4]. Researchers have also observed quantum-confined Stark effect electro-absorption in Ge quantum wells with SiGe barriers grown on Si substrates, and a Ge modulator based on this effect has been demonstrated on a Si substrate [5]. This effect is very promising for high-speed, low-power modulators fabricated compatibly with mainstream Si ICs [5].

An efficient light source, on the other hand, remains particularly challenging: Si and Si-compatible materials such as Ge are not readily suitable for light emission because their band gaps are indirect. In Ge, however, the energy difference between the direct Γ valley and the indirect L valley is only 136 meV and this difference can be reduced further by introducing tensile strain [6]. It has been proposed to use tensile strain to make Ge’s band gap direct and thus suitable for light emission [7,8], however highly-strained Ge experimental device realization has thus far been limited to LEDs [9] rather than lasers.

In this presentation, we focus on developing an efficient Si-compatible light emitter based on highly-strained Ge technology. Starting from theoretical calculations showing how tensile strain can improve the light emission efficiency of Ge [7,8], we present several approaches for enhancing light emission from highly strained Ge on a CMOS-compatible platform. We have developed methods to grow single crystal Ge films with low defect densities on Si [10]. First, we describe a thin film membrane technique in which a large residual stress in a tungsten layer as a stressor is used to induce a biaxial tensile strain in a Ge membrane, upon which we have fabricated optoelectronic devices  [11]. Second, we introduce an approach to induce sufficiently large uniaxial strain to create a direct band gap in Ge wire using geometrical amplification of a small pre-existing strain induced during the heteroepitaxial growth of Ge on Si  [12]. Lastly, we present a novel way to mimic double-heterostructure behavior within a single material, further enhancing light emission from Ge by capturing photo-generated carriers within a strain-induced potential well [13]. In summary we have demonstrated integration of Ge on Si for optoelectronic applications. This should alleviate a critical performance bottleneck in the continued scaling of integrated circuits to future technology nodes. 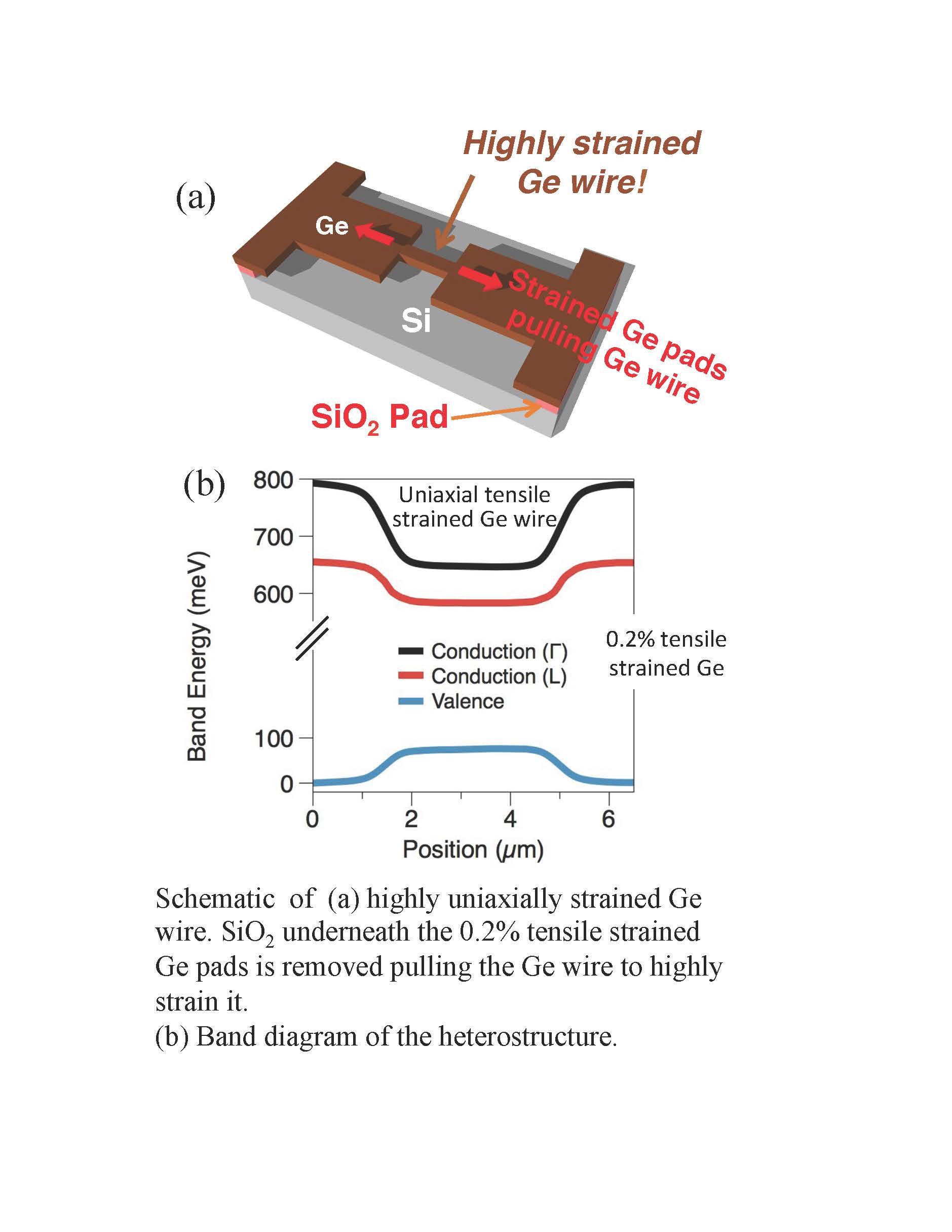