1698
Degradation of Organic Additives and Its Influences on Cu Electrodeposition

Some of organic additives can be decomposed during electrodeposition through the undesirable chemical process.1-4 SPS, common accelerator, can be decomposed into 1,3-propanedisulfonic acid (PDS) through the electro-oxidation as well as the reaction with molecular oxygen.1,2PEG and PEG-PPG can undergo the oxidative fragmentation, resulting in the reduction of molecular weight and the changes in the terminal group.

Since the concentration of organic additives is one of the important factors determining the properties of deposited Cu films, the monitoring system for maintaining additives’ concentrations has been utilized. The most common monitoring method is cyclic voltammetry stripping (CVS). While CVS has advantages of low cost, simplicity, and sensitivity, it cannot quantitate the amount of by-product. Therefore, the spectroscopic methods such as mass spectroscopy (MS), nuclear magnetic resonance (NMR), chromatography, and UV-visible spectroscopy have been used to observe detail bath compositions. Even though the bath composition is continuously maintained by the additive supplement based on the CVS monitoring, the lifetime of bath is not permanent. It is related to the accumulated by-products. Therefore, to improve the bath lifetime, the decomposition mechanism of additive should be investigated.

In this study, we intentionally degraded the organic additives under the conventional 2-electrodes plating conditions consisting of Cu foil cathode and Ti/Ti oxide anode. The plating bath was composed of CuSO4, H2SO4, Cl-, SPS and PEG-PPG. As Cu electrodeposition progressed, SPS was converted to MPSA and PDS. Before Cu electrodeposition, the fresh electrolyte consisted of pure SPS as indicated in Figure 1. However, the peaks corresponding to MPSA and PDS were intensified as the deposition time increased. The produced MPSA and PDS can affect not only the film properties but also the concentration monitoring by CVS. This implied that the actual concentration of accelerating species in the electrolyte could be changed even CVS monitoring was used. Furthermore, PEG-PPG was also decomposed. The average molecular weight of PEG-PPG was considerably reduced as observed in Figure 2. It was originated from the fragmentation via oxidative reaction. This fragmentation also disrupted the monitoring of concentration by using CVS, because the fragmented PEG-PPG could adsorb on Cu surface and it was electrochemically active. This signified that the performances of fresh and aged baths would be changed although the measured concentrations from CVS were identical.

Figure 1. 1H-NMR spectrum of SPS-related compounds as the function of deposition time.1

Figure 2. Mass spectrum showing the changes of mass distribution of PEG-PPG during electrodeposition.3 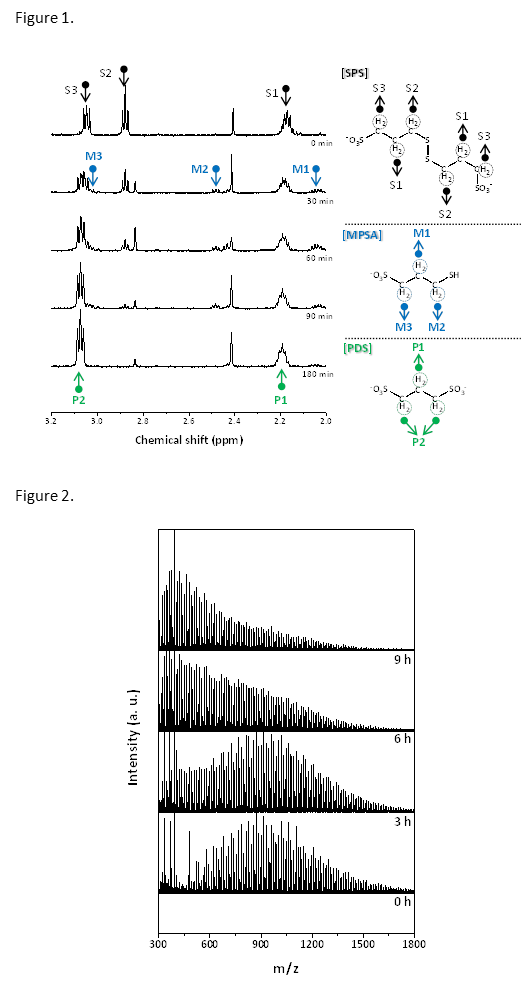