Expo Center, 1st Floor, Universal 16 (Moon Palace Resort)
K. Tapily, S. Consiglio, R. Clark (TEL Technology Center, America), R. Vasic (College of Nanoscale Science and Engineering), C. Wajda (TEL Technology Center, America), J. Jordan-Sweet (IBM), G. Leusink (TEL Technology Center, America), and A. C. Diebold (College of Nanoscale Science and Engineering)
As Si metal oxide semiconducting field effect transistors have continued to scale, SiO2-based gate dielectric and polySi gates have been successfully replaced by high-k dielectrics and metal gate at the 45nm technology node and beyond. In order to continue scaling, improvements of key film properties of the high-k dielectric, such as k-value and leakage current, are needed. The electrical properties of HfO2-based dielectrics may be enhanced by structural modifications, since the k-value is dependent on the crystalline phase (monoclinic k=16, tetragonal k=70 and cubic =29) [1]. HfO2 films typically crystallize into the monoclinic phase, which is its most thermodynamically stable phase [2,3]. Alloying HfO2 with other oxides such as ZrO2, TiO2, Al2O3offer a viable option towards engineering the crystalline phase.

In this regards, we have deposited 40 cycles of Hf1-xAlxOy films by atomic layer deposition with Al/(Hf+Al)% ranging from 0 to 25%. A set of samples were annealed under N2 at temperatures ranging from 680 oC to 800oC and compared to the as deposited samples. To investigate the crystallinity of the films, we performed grazing incidence in-plane X-ray diffraction (GIIXRD) on the annealed films and in-situ XRD during an anneal process using synchrotron radiation was used to determine the crystallization temperature (Tc) for the unannealed films. The GIIXRD measurements revealed the presence of non-monoclinic peaks which was also confirmed by the in-situ anneal XRD measurements. The crystallization temperature of the non-monoclinic phase obtained from the in-situ anneal XRD is plotted in Fig.1, where it is shown that higher Al/(Hf+Al)% results in higher Tc. In order to resolve the non-monoclinic phase, extended X-ray absorption fine structure (EXAFS) at was utilized. The EXAFS measurement combined with GIIXRD showed the ALD Hf1-xAlxOy films crystallize into a mixture of the tetragonal and monoclinic phases. The electrical properties were investigated by MOS capacitors with ALD TiN as the metal gate. The electrical measurements show a reduction in EOT after post deposition anneal (PDA). In addition, the leakage current was also reduced by a factor of 10 while maintaining a flat-band voltage that is comparable to PDA HfO2 films under identical conditions. The C-V plots of the as deposited samples and annealed samples are shown in Fig. 2 and Fig.3 respectively. We also investigated the effect of different thermal budgets on the Hf1-xAlxOy films. A ~2Å EOT reduction with lower gate leakage was obtained for devices with post deposition anneal near the crystallization temperature of the Hf1-xAlxOyfilms. However, the electrical performance is degraded for devices with higher or lower post deposition anneal temperature than the films’ crystallization.

In summary, we have successfully deposited ALD Hf1-xAlxOy. The crystal phase was confirmed to be a mixed phase of tetragonal with monoclinic. The data shows an enhancement in electrical properties near the crystallization temperature of the Hf1-xAlxOyfilms.

Diffraction measurements were carried out at NSLS (X20A and X20C), BNL, which is supported by the DOE, Division of Materials Sciences and Division of Chemical Sciences, under Contract No. DE-AC02-98CH10886. 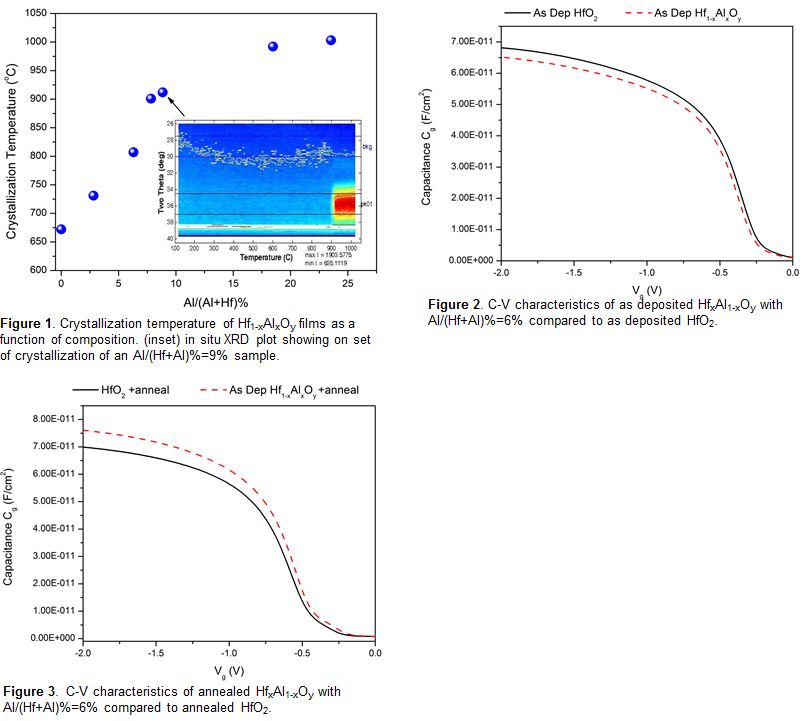