Expo Center, 1st Floor, Universal 17 (Moon Palace Resort)
E. Simoen (Imec, Ghent Unviversity), K. Saga (Sony Corporation), J. Lauwaert, and H. Vrielinck (Ghent University)
1. Introduction. W is a refractory metal often used as a barrier layer in advanced metallization schemes for CMOS devices and circuits. It can also be in direct contact with silicon as WSi2 in self-aligned technologies, so that in-diffusion from the surface is a potential source of electrically active metal impurities in the substrate. It is well-known that metallic contamination can drastically degrade the electric properties of silicon and its surface by introducing deep levels in the band gap [1]. In spite of its technological relevance, only a few deep-level studies have been reported for the case of W-contaminated or - diffused Si [2]-[4], with rather conflicting results on the exact position of the W-related traps. There is consensus that at least one W-related  deep center at EV+0.41 eV in p-type material affects the generation and recombination lifetime of silicon. It is the aim of the present work to further investigate the electrical parameters of W-diffused silicon by Deep-Level Transient Spectroscopy (DLTS).

2. Experimental conditions. W was spun on from a chemical solution on the front surface of 200 mm n- and p-type Czochralski (CZ) Si wafers to a dose of 1010, 1011 or 1012 cm-2, as evaluated by Total Reflection X-ray Fluorescence (TXRF) analysis. In-diffusion was performed at 950 oC for 10 min in an N2 ambient, followed by slow cooling to ambient temperature. Uncontaminated reference wafers have also been heat-treated. Circular Au (n-) or Al (p-) Schottky barriers have been evaporated through a shadow mask after removal of the native oxide in diluted HF. In some cases, a thin layer of silicon was etched off by a HF:HNO3etch (1:10) for 30 s or 1 min. A back ohmic contact was fabricated by InGa eutectic and a piece of In foil. Both constant- and variable-temperature Fourier-transform DLTS has been performed on 1.5 mm diameter barriers. Different voltage pulses have been applied in order to derive the trap density profile.

3. Results and discussion. As is shown in Fig. 1, two peaks are found in the DLT-spectra of p-type silicon with the highest contamination dose (1012 at/cm2): one around 215 K with activation energy of 0.409 eV and a broad peak around 300 K. The former peak is dominant at larger depths from the surface, i.e., for a pulse from -4 V to -1 V in Fig. 1, while the deeper trap becomes more pronounced closer to the surface (-2 V to 0 V spectrum in Fig. 1) and behaves more like an extended defect, with a peak position shifting with reverse bias. While the deeper trap exhibits an exponentially increasing concentration profile towards the surface, it is demonstrated that the profile of the EV+0.409 hole trap is rather flat up to the 1 mm depth range, corresponding with a reverse bias of -10 V.

The 0.409 eV level is in close agreement with previous reports on W-diffused p-type silicon [3],[4]. Furthermore, the peak is absent or very weak in the wafers with a lower contamination dose. At the same time, it is observed that the trap concentration varies significantly from sample to sample, indicating a non-uniform contamination level across the wafer. This is also reflected in the strongly varying reverse current of the fabricated Schottky barriers, which shows a correlation with the DLTS amplitude. This suggests that the EV+0.409 eV level has a clear impact on the generation lifetime.

Finally, in n-type Si, a small peak at about EC-0.22 eV is found for the highest W dose studied, which may correspond with the W-related level reported in Ref. [3]. It is only observed for bias pulses close to the surface, indicating the low diffusivity of W in Si at 950 oC.

4. Conclusions.It has been shown that W diffusion  in silicon gives rise to at least two hole traps in p-type material and one electron trap in n-Si. 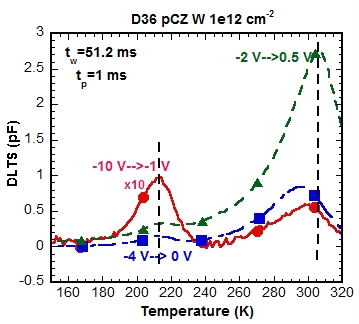