Expo Center, 1st Floor, Universal 17 (Moon Palace Resort)
D. Shibata, S. Kobayashi, K. Sueoka (Okayama Prefectural University), J. Komachi, and K. Saga (Sony Corporation)
Heavy metal impurities are widely recognized to degrade the performance of silicon devices and yield. Si nitride thin films are used as the through film for ion implantation, the stressor for engineered strain on a channel and so on in the LSI manufacturing process. However, there are rather few studies on metal behavior in Si nitride on Si substrate compared to Si oxide.

Very recently, Ueno et al. [1] reported the experimental results of metal behavior for Si nitride film on Si substrate (SiN/Si) and concluded that first, Ni and Cu atoms diffuse in SiN/Si, second, W, Cr, and Fe atoms remain at the surface of SiN film, after thermal annealing. Third, they found that W and Cr atoms are knocked into SiN film while Fe atoms remain at SiN surface by ion implantation.

We modeled SiN/Si structures atomically. An Ab initioanalysis on the stability of Fe, Cr, Ni, Cu, and W atom in this structure was done to explain the experimental results.

The calculation method is the first principles calculation, in which the ground state of the system is found by solving the Kohn-Sham equation [2] that is a rule equation of the electronic system for a given atomic configuration. The program package used in this study was CASTEP [3]. Wave functions are expanded by using plane-waves, and ultrasoft pseudopotential is used to reduce the number of plane waves [4]. The cut-off energy for the plane-wave expansion is 340 eV. The generalized gradient approximation (GGA) is used for the exchange-correlation term, and the functional form is of the PBE type [5].

We prepared eight models of the β-Si3N4 /Si interface. After the geometry optimization, we obtained the stable interface model which consists of 96 Si atoms (yellow) and 56 N atoms (blue) as shown in Fig. 1.

As shown in Fig. 1, Cr, Fe, Ni, Cu or W atom was placed at six interstitial sites. Geometry optimization was performed to evaluate the formation energy at each site around the interface. Similar calculations were done for the surface model of β-Si3N4, β-Si3N4 bulk model for SiN thin film, and Si bulk model for the Si substrate.

The amount of formation energy calculated of each metal near the β-Si3N4 /Si interface is shown in Fig. 2. The horizontal axis indicates the position of each metal in SiN/Si structure. The result can be summarized as follows.

The first result obtained qualitatively explains the experimental result (1) as the W, Cr and Fe atoms are more difficult to diffuse into SiN film as their formation energy is higher than Cu and Ni. Furthermore the second calculated result explains the third experimental result as the W and Cr are weakly captured at the SiN surface due to the higher formation energy than Fe atom.

In summary, we have modeled SiN/Si structures atomically and performed an ab initioanalysis on the stability of Fe, Cr, Ni, Cu, and W atom in this structure. By using the calculated values of formation energy of these metals, we explained the experimental results to some extent.

[1] K. Saga, to be presented in 12th International Symposium on Ultra Clean Processing of Semiconductor Surfaces.

[3]The CASTEP code is available from Accelrys Software Inc. 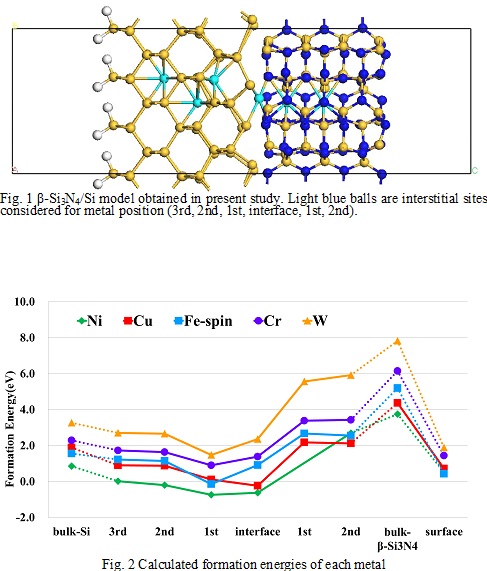