Expo Center, 1st Floor, Universal 17 (Moon Palace Resort)
J. Lauwaert, F. Moens, S. H. Segers (Ghent University), K. Opsomer (IMEC), E. Simoen (imec vzw, Ghent University), J. Vanhellemont, P. Clauws, F. Callens, and H. Vrielinck (Ghent University)
1. Introduction. Mn doped germanium was studied almost 60 years ago by means of Hall effect [1] and photo conductivity [2] measurements.  Based on the temperature dependence of the resistivity and carrier concentration, two levels, one at 0.37eV from the conduction band and one at 0.16eV from the valence band have been assigned to Mn impurities[1]. In agreement with the valence bond model and similar observations by counterdoping with donors for Fe, Co and Ni, these impurities have been assigned to double acceptors.  Moreover, the presence of  a  double acceptor level was confirmed by the observation of the Mn2- state with Electron Paramagnetic Resonance (EPR). [3]  However it was also noted in the early studies that the presence of contamination with acceptor impurities may cast doubt on the charge transition assignment. Since the availability of Deep Level Transient Spectroscopy (DLTS), which is a more reliable technique to study deep levels in semiconductors, the electronic properties of most of the 3d  transition metals have already been studied with a higher energy resolution. Metal in-diffusion was successful to introduce Cu and Ni[4]. More recently the defect levels of Ti, Cr, Fe and Co have been identified with DLTS on metal-implanted Ge [5,6].  The present study reports on results obtained  on  Mn doped Ge.
2. Experimental conditions.  The source material are single crystal germanium wafers, supplied by Umicore, with a shallow dopant concentration of 1014 cm-3 Ga and Sb for p- and n-type, respectively. To introduce Mn impurities, 99.995% pure Mn was thermally evaporated on the Ge surface.  Afterwards the specimens were placed in a resistive furnace under Ar atmosphere for 10 minutes  at 700°C.  Finally, the residual Mn on the surface was removed by etching with a mixture of HNO3 and HF (3:1?). Schottky diodes for DLTS were prepared by evaporation of Au (n-type) or In (p-type) barriers immediately after etching. To identify the contamination introduced during the processing, Schottky diodes were also prepared on  parts of the specimens outside the Mn covered areas.  Schottky diodes on n-Ge were also prepared by annealing the n-Ge:Mn samples (after indiffusion at 700°C) to 400°C for 20 min in order to form a MnGe metallic alloy contact.
3. Results and discussion. Fig. 1 a shows the DLTS spectrum of n-Ge:Mn with a  MnGe Schottky contact.  A similar spectrum was recorded on the specimen with an Au-Schottky barrier. Conventional DLTS shows one electron trap (Mn-E1), while injection of minority carriers (Vp>0) reveals two additional levels (Mn-H1 and Mn-H2). Fig. 1 b shows the DLTS spectrum of p-type Ge, with presence of Mn-H1 and Mn-H2 only after Mn diffusion.

Figure 1: DLTS spectrum of a)  n-Ge/MnGe diode. b) p-type Ge with and without Mn-difussion. 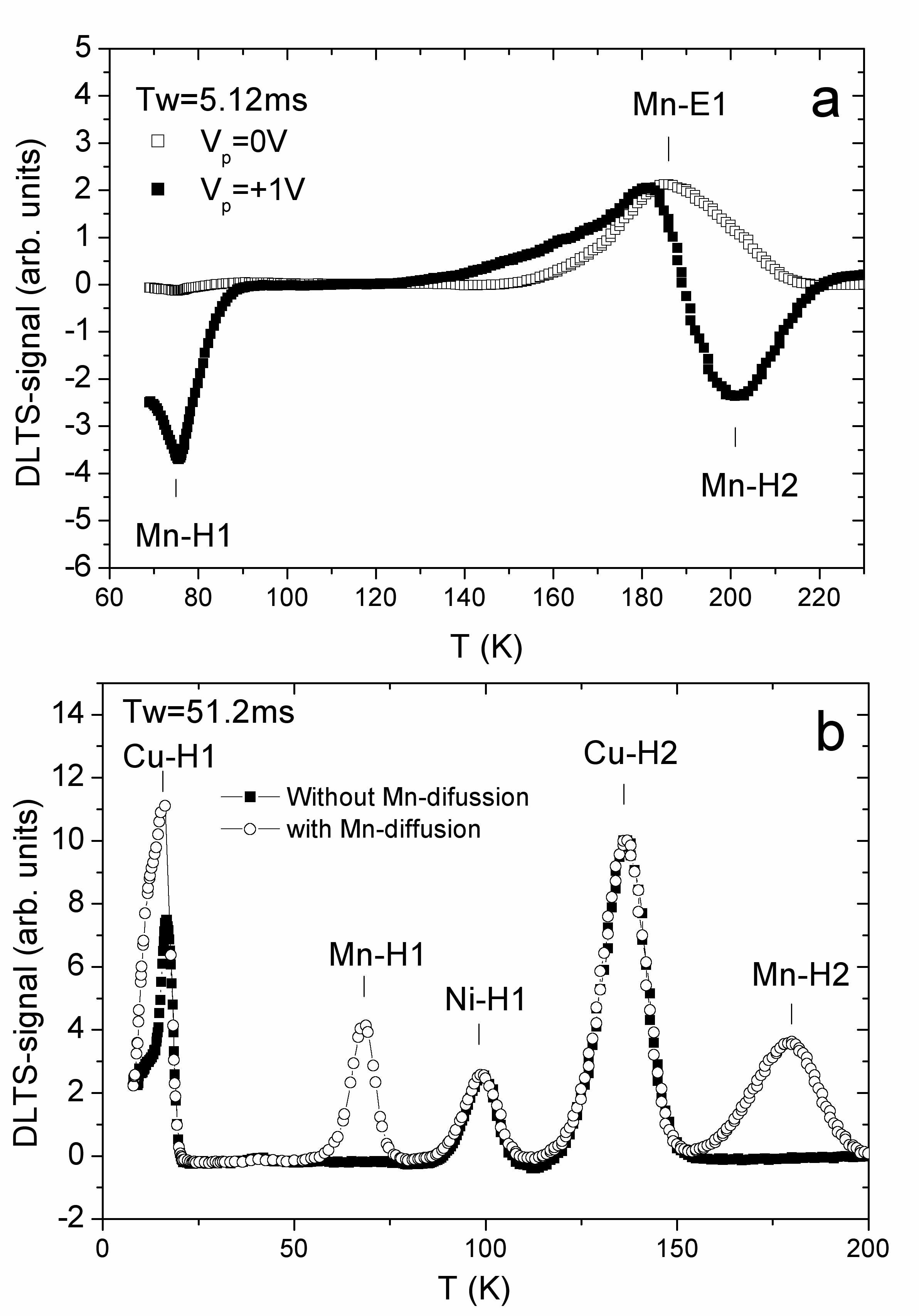