1904
Thinning the Active Layer of TFTs

Expo Center, 1st Floor, Universal 4 (Moon Palace Resort)
M. L. Samb, H. Dong, E. Jacques (University Rennes 1), G. Sissoko (University Cheikh Anta Diop Dakar), A. Seidou Maiga Sr. (University Gaston Berger), and T. Mohammed-Brahim (University Rennes 1)
Large area electronics on glass is now well established. It was and it is mainly driven by the flat panel displays industry. However, it gains more and more other markets: integration of electronics with any sensing function, electronics on any substrate, plastics and different kinds of paper. The basic device in this electronics is the Thin Film Transistor (TFT). As shown by its name, TFT is constituted by a stack of insulators and semiconductors thin films. The active material of these transistors was silicon at the beginning. Now, other active materials as organic semiconductors and metal oxides semiconductors are used.

The common characteristic of these materials is that their structure is mainly not single-crystalline. By this way, the energy band gap contains a lot of permitted states for electrons. The electrical conduction is affected by these states and then the electrical parameters of the transistors are lower than expected. For example, the subthreshold slope of the transistors is high and then they commute slowly.

Regarding the old works on SOI-MOSFETs, it can be remarked that the subthreshold slope improved in some experimental conditions when decreasing the thickness of the active layer.

In this work, after confirming this trend experimentally for as-deposited crystallized silicon based transistors, a simulation of the TFT electrical behavior is set up using the simulation tools from the software called Virtual Wafer Fab (SILVACO). Particularly ATLAS tool is used for the electrical simulation of the transistor. The simulated structure is a top-gate TFT deposited on 700 µm thick glass substrate (Figure 1). The substrate is modeled as SiO2 material and it is grounded.

The density of permitted states inside the forbidden band-gap of the no single crystalline active layer is modeled by 4 exponentials with characteristic parameters WTD, WGD, WGA and WTA (Figure 2). This model can be considered as common for all semiconductors having disordered structure.

The other beneficial effect is on the influence of the rear interface, particularly on the known back channel formation that is an important drawback for TFTs. Figure 5 shows the effect of increasing the surface charge at the rear interface for a thin and a thick active layer. The use of thin layer reduces the effect of these charges keeping low the off-current. 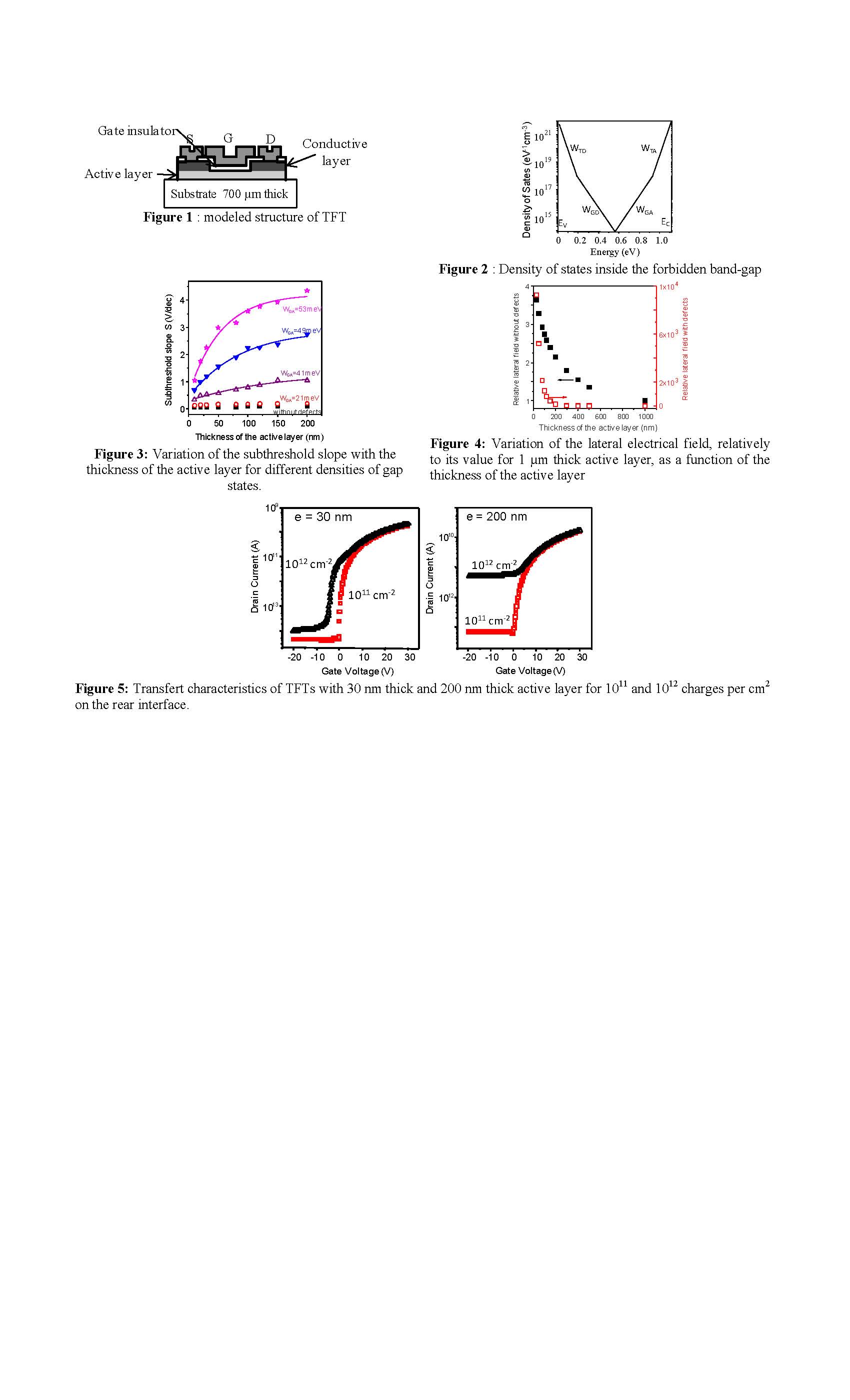