Expo Center, 1st Floor, Universal 8 (Moon Palace Resort)
A. Mosleh, M. Benamara, S. A. Ghetmiri, B. R. Conley (University of Arkansas), M. A. Alher (University of Karbala, Karbala, Iraq), W. Du (University of Arkansas), G. Sun, R. Soref (University of Massachusetts Boston), J. Margetis, J. Tolle (ASM America), S. Q. Yu, and H. A. Naseem (University of Arkansas)
Silicon photonics is rapidly growing because of the recent introduction of GeSn alloys as a group IV direct bandgap material. Viability of GeSn alloys for complementary metal-oxide-semiconductor  technology, as demonstrated recently, is another step towards commercializing this material for integrated circuits applications [1].  However, ability to grow high quality materials is imperative for device applications.  In order to compensate the high lattice mismatch between the Si substrate and the GeSn film different strain relaxed buffer layers, such as Ge, are used. Relaxation of Ge buffer layer introduces a network of misfit dislocations. This can result in high threading dislocation density (TDD) in GeSn degrading the performance of the final device.  In this paper, we report on defect formation and propagation mechanism in Ge1-xSnx films.

Plastic relaxation of higher lattice constant materials (SiGe, Ge, GeSn) on top of Si forces the layers to form 60o misfit dislocations.  These dislocations are caused by slip of (110) and (111) planes in the diamond lattice structure, which have a screw component that threads through the grown film.  Fig. 1 (a) schematically shows how defects form and propagate through the film. A network of misfit dislocations results in a cross-hatch pattern on the surface of the film. Fig. 1 (b) shows the plan view transmission electron microscopy (TEM) image of Ge.93Sn.07 on top of Ge buffer layer. The cross-hatch patterns formed at GeSn/Ge interface have overlapped with those of Ge/Si. The denser pattern is attributed to the Ge/Si interface due to higher lattice mismatch. Fig. 1 (c) delineates scanning electron microscopy image of decorated threading dislocations at the surface by using cold Schimmel solution (CrO3+HF) for 10 minutes.  Density of pits (1.1×107 cm-2) is in good agreement with TDD measured from TEM micrographs (3×107 cm2)[1]. It also confirms that the quality of GeSn material is higher than Ge buffer layer (TDD: 9.71×108 cm-2) by an order of magnitude.

The main reasons behind this phenomenon is that the Burgers vector in Lomer misfit dislocation, for a (001) substrate, lies parallel to the interface [2].  Therefore, the substrate and film lattices can match while no prependicular component exists.  In this case the film is grown relaxed without introducing structural imperfection such as threading dislocations, which degrades the material quality.

Our investigations show that formation of symmetric and asymmetric Lomer dislocation at the interface of Ge/GeSn film has reduced the TDD in GeSn film. Results from TEM images and etch pit density measurement verifies this conclusion by showing that 80% of the threading dislocations has not passed through the GeSn film. The current results show achievement of high quality GeSn film as well as indicating that GeSn is a unique candidate to be used as a universal compliant layer. 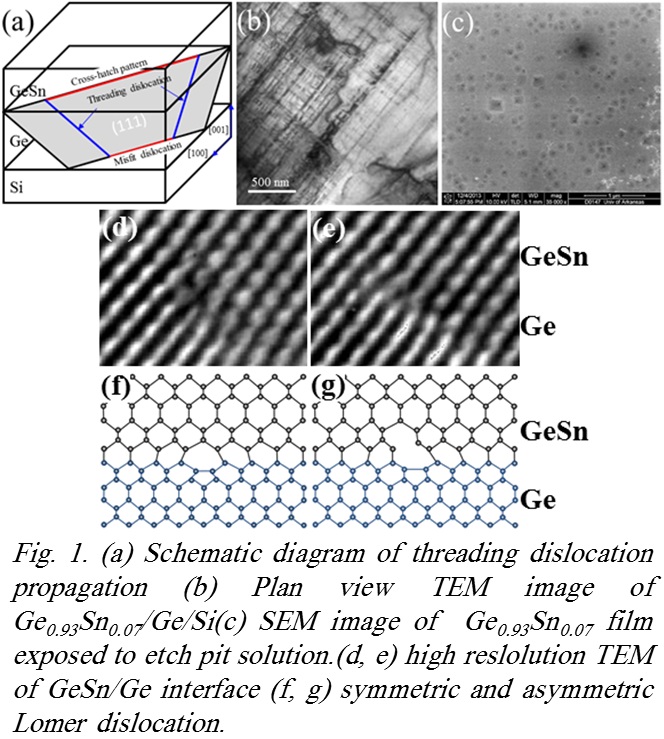