Expo Center, 1st Floor, Universal 5 (Moon Palace Resort)
T. Shintani, S. Soeya (Institute of Advanced Industrial Science and Technology, Central Research Laboratory, Hitachi, Ltd.), and T. Saiki (Keio University)
Phase Change Memory is one of the most promising candidates for next generation non-volatile memories. PCM, however, has some drawbacks, one of which is the high consumed power in recording a data bit. To solve this problem, a superlattice phase change material GeTe/Sb2Te3 (GeTeSL) has been proposed, which reduces the consumed power to about 10% of the conventional PCM material Ge2Sb2Te5 (GST225) [1]. This paper reviews the studies on the materials to further reduce the power and the switching mechanism of the SL materials, and the circumvention for ultralow consumed power using the above-mentioned mechanism.

The test device was fabricated on the Si substrate with W plug of 150 nm in diameter surrounded by SiO2. The film structure of the SL device was as follows if not mentioned; TiN(1 nm)/Sb2Te3(10 nm)/[GeTe(1 nm)/Sb2Te3 (4 nm)]8/W(50 nm). The part in the parenthesis is the SL region where the number of the SL cycles was 8. The film was deposited by sputtering with the substrate heated to 250°C. The bottom TiN controls the heterogeneous nucleation probability of Sb2Te3 to obtain the smooth surface for well-aligning the SL structure [2]. The bottom Sb2Te3 is to define the crystal orientation of the SL region. With this method, the well-aligned SL structure was obtained where Sb2Te3(001) and GeTe(111) were highly oriented [3].

Figure 1 shows the relationship between x and the RESET voltage or the dynamic resistance, which indicates that the reduction of Irst is the main cause of the extreme power reduction. This result can be explained by the hypothesis that the SL material is switched not by thermal energy but by the electric field. This hypothesis is supported by the electric and optical experiments [5]. The relationship between the RESET pulse width and the Vrst or Irst shows that the Vrst ∙ Irst is almost constant in GST225 whereas Irst decreases at short pulses and Vrst stays constant in GeTeSL and SnTeSL. The optical experimental results using a femtosecond laser and a z-polarizer indicate that the in-plane electric field contributes to the power reduction in GeTeSL. The first principle calculation using the density functional theory and Berry phase confirms that the in-plane electric field causes the motion of Ge or Sn in SL materials even though the temperature was kept 300K.

Figure 2 shows the measurement results of the devices with the various SL cycles in SnTeSL. Vrst decreases almost linearly as the number of cycles decreases whereas the RESET power is reduced exponentially due to drastic reduction of Irst. The RESET power was about 1/10000 of GST225 at a single SL. This result comes from the electric-field-induced mechanism where the read resistance can be switched with the dynamic current sufficiently suppressed. This dynamic current suppression is one of the key issues in reduction of the consumed power in PCM, which is achieved uniquely by the well-aligned SL materials.

This research is granted by JSPS through FIRST Program initiated by CSTP. 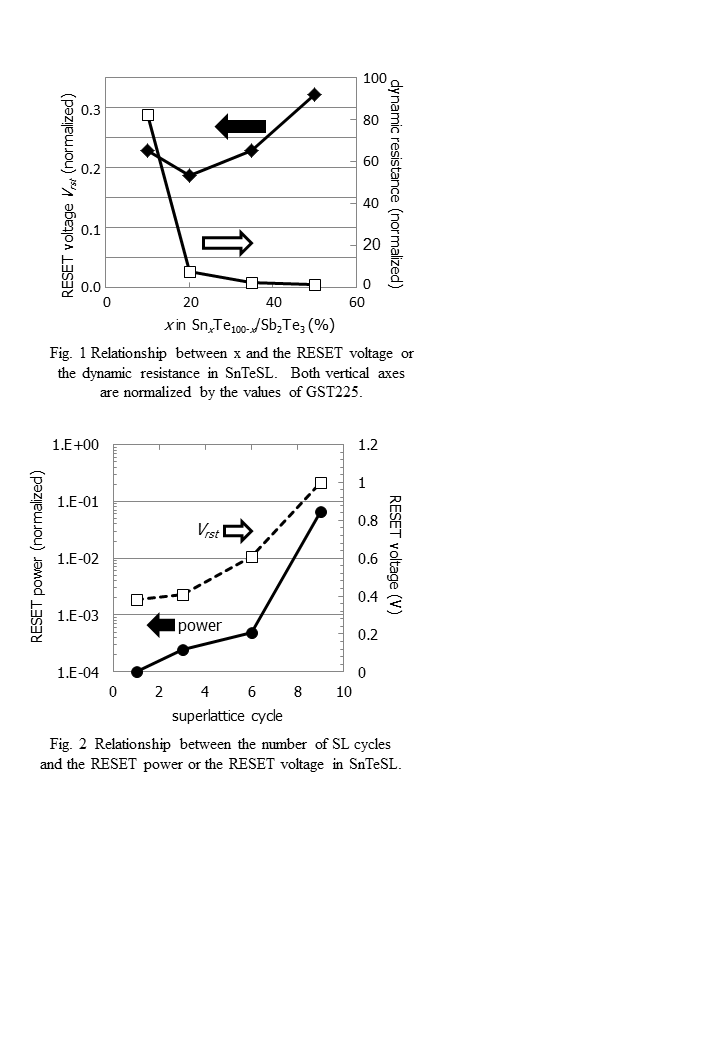