Expo Center, 1st Floor, Universal 4 (Moon Palace Resort)
J. Zhang, M. Trifunovic, M. van der Zwan (Delft University of Technology), H. Takagishi (Japan Science and Technology Agency), T. Shimoda (Japan Science and Technology Agency, Japan Advanced Institute of Science and Technology), and R. Ishihara (Delft University of Technology, Japan Advanced Institute of Science and Technology)
In the application of display, Si TFTs is superior than organic TFTs and metal oxide TFTs in the sense of carrier mobility, reliability and traditional IC process compatibility. However, the difficulty of achieving single crystalline Si limits the application of Si TFTs. In this paper, we would like to present a low-temperature approach for manufacturing single-grain Si TFTs on a precursor from doctor-blade coated liquid-Si on flexible polyimide substrate, with the carrier mobility of 460 cm2/Vs and 121 cm2/Vs, for electrons and holes respectively.

Pure cyclopentasilane is used as liquid-Si, and it was coated using doctor-blade method, and polymerized under the UV lamp. According to [1], polysilane was formed after polymerizing the solution of cyclopentasilane and toluene. After an annealing process at 350 °C, an a-Si precursor was formed (see Fig. 1). A XeCl laser with the wavelength of 308 nm was used for the crystallization of the a-Si precursor, and thanks to the special cavity structures called the grain-filters, which are 110 nm width by 700 nm depth, underneath the a-Si layer, Si single grains were formed[2] (see Fig.2). A top-gated transistor was fabricated using the IC-compatible process of ICP gate oxide growth (250 °C), PECVD TEOS oxide (350 °C), Al gate and contact pads formation, self-aligned source-drain dopant ion-implantation and laser activation of the dopants (room temperature). The process temperature was so low that the devices were fabricated on top of flexible polyimide substrate. At the end of the process, all the devices were peeled off from the supporting Si wafer to a PEN foil and become flexible (Fig. 5).

The devices show transfer characteristics with high on-off ratio and high carrier mobility, 420 cm2/Vs for electrons and 121 cm2/Vs for the holes (Fig. 3). After peeling off from the Si wafer, the devices could function until a bending diameter of 6 mm (Fig.4). To restrain the mobility degradation during the bending, a double-sided polyimide structure was investigated. 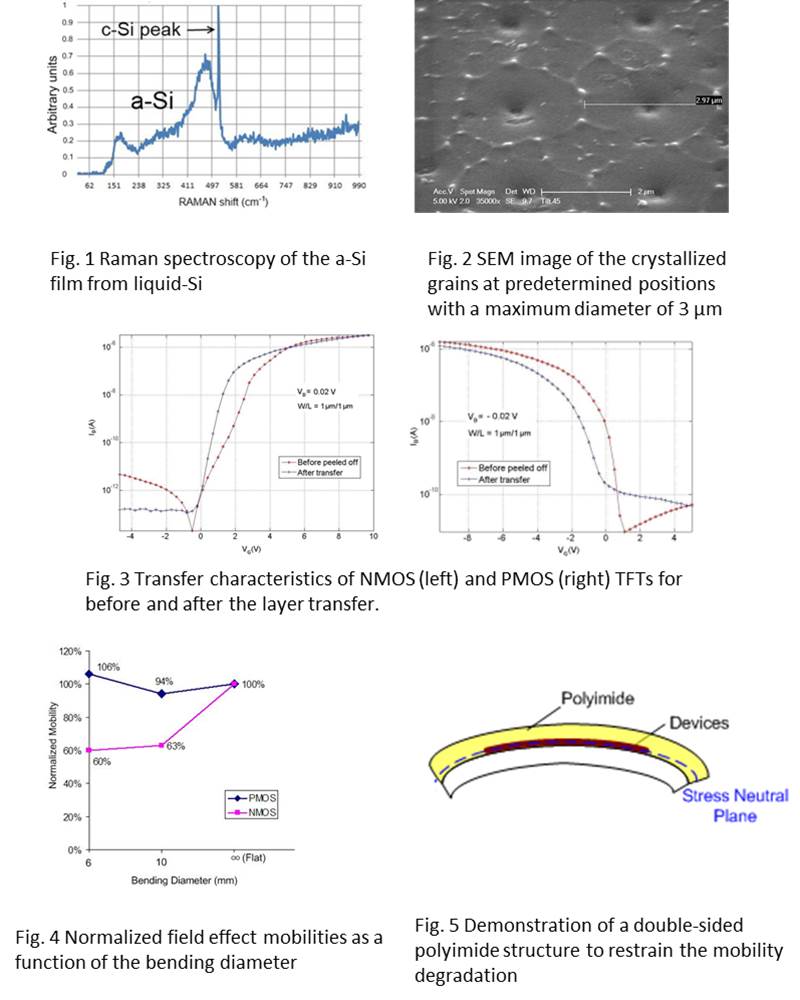