Expo Center, 1st Floor, Universal 8 (Moon Palace Resort)
S. Dhayalan (K.U.Leuven, IMEC), R. Loo (imec vzw), E. Rosseel (Imec), A. Y. Hikavyy (IMEC), Y. Shimura (FWO Pegasus Marie Curie Fellow), T. Nuytten, O. Richard (imec), H. Bender (IMEC), B. Douhard (imec vzw), and W. Vandervorst (IMEC)
Introduction of source drain stressors to FINFETs is a potential approach to continue scaling. It is well known that application of tensile stress to Si fins will improve the mobility of n-type FINFETs. This can be induced by Si:C source drain stressors which have a smaller lattice constant than Si. The growth of Si:C requires low temperatures and high growth rates to prevent the precipitation of C related defects and to increase the C substitutionality. Conventional precursor gases might not be suitable for the above said requirements. Hence higher order silanes such as disilane (Si2H6), trisilane (Si3H8), neopentasilane(Si5H12) etc,  are more suitable to serve the purpose. In the current study, we focus on the material aspect of Si:C and Si:C P blanket growth using disilane, monomethyl silane and phosphine. The layers were grown in the temperature regime between 525oC - 600oC using hydrogen or nitrogen as carrier gas.

For both temperatures 525oC and 575oC, the surface of the Si:C films were defect free for <1% of C and started to completely get defective from 1 – 1.5% of C. Beyond 1.5% C the layers underwent epitaxial breakdown. Cross sectional TEM investigation revealed amorphous nature of the surface defects (Fig.1(a) and (b)). Contrary to the expectations, on increasing the temperature to 575oC, the amount of substitutional C increased by a small amount. This enhancement is attributed to Increased growth rate with increasing temperature. However, the growth of the Si:C layers at 600oC resulted in reduced substitutionality as well as partial amorphization. It is believed there is a temperature dependent critical C content, below this critical C content, increasing growth rate can aid in higher C substitutionality and crossing the critical content, defect formation kinetics might be faster. We attribute enhanced surface diffusion of C  to form many defect nucleation centres to be the reason for the amorphization at high temperatures. Layers that were grown in nitrogen had lower number of surface defects than the layers grown in hydrogen.

Raman spectroscopic studies of different undoped samples revealed the C atom to be predominantly present as 3rd nearest neighbor. The presence of peaks corresponding to 3rd nearest neighbours is indicative of SinC (with n = 3,4…)phases* which should have been the nucleation centres for defects during the growth. It is not clearly known whether these phases are formed due to enhanced  surface diffusivity of C or surface segregation of C during the growth. Layers doped with P started to form twinning defects beyond 40nm of growth and underwent epitaxial breakdown. Thinner Si:CP layers were found to be defect free. We were also able to observe  reduced intensity of Csub raman peak in the doped samples. This suggests that P addition results in some reduction in C substitutionality. However the presence of same amount of strain before and after doping indicates that added P also contributes to certain amount strain in the lattice. 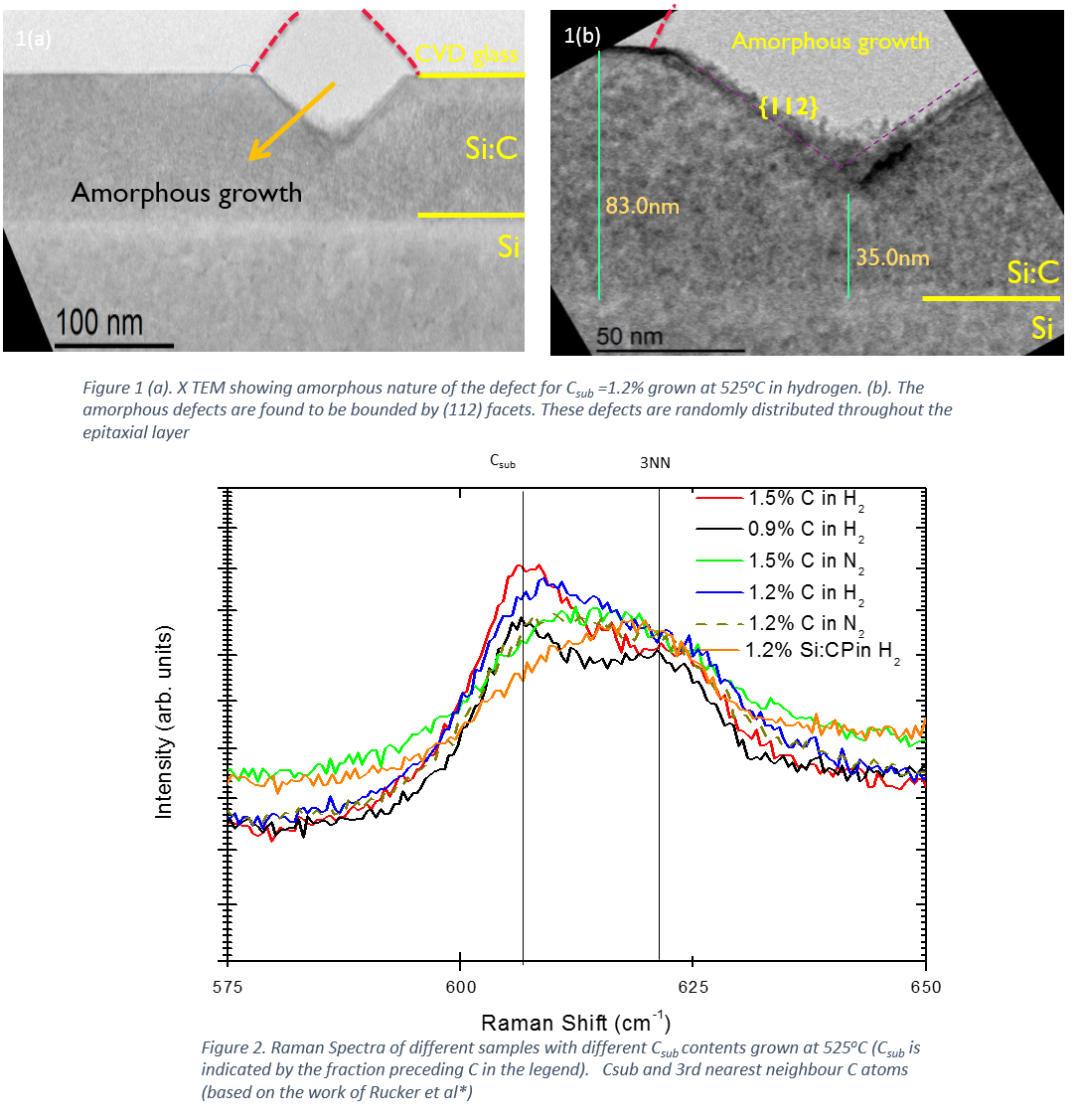