Expo Center, 1st Floor, Universal 8 (Moon Palace Resort)
A. Attiaoui and O. Moutanabbir (Department of Engineering Physics, École Polytechnique de Montréal)
Sn-containing group-IV semiconductor binary and ternary alloys (GeSn, SiSn, and GeSiSn) provide a wealth of opportunities to independently manipulate band gap and lattice parameter.  This opens up the possibility to create an entirely new family of electronic and optoelectronic devices.  Towards this end, it is of paramount importance to develop a deep understanding of the electronic and optical properties of these group-IV alloys-based heterostructures, nanoscale structures, and devices.  In this perspective, this work reports detailed studies of the influence of both strain and composition on the band structure of GeSiSn ternary alloys. First, we developed a simple yet rigorous semi-empirical second nearest neighbors tight binding1 sp3s*method that incorporates the effect of substitutional disorder. We have found that the composition of α-Sn at the direct to indirect crossover of the ternary alloy decreases from 11% in a fully relaxed alloy to 7% in tensile strained alloy (for a strain value of 0.71%).  In the latter case, we have considered a thin GeSiSn layer is epitaxialy grown on a thin Ge substrate.

Furthermore, we also studied the properties of electronic confinement and optical responses in variety of systems. This includes Ge/GeSn, Ge/GeSiSn and GeSn/GeSiSn heterostructures, where the strain effect is incorporated using the second nearest neighbors sp3s* semi-empirical tight binding model.1-2 The second set of the investigated systems consists of superlattices3 (,), where n and m are the number of monolayer considered. The compositions of Si and Sn in the ternary alloy vary in the range of 0-40% and 0-20%, respectively. The effect of growth orientations are also treated by focusing on three crystallographic growth orientations; mainly [001], [110] and [111].  The strain effect was also considered in these cases.  Moreover, the effect of spatial charges separation on the intersubband and interband transitions in the superlattice, is treated in order to quantify optical properties of theses superlattices.

The last section of this work addresses the behavior of GeSn and GeSiSn semiconductor nanowires.  Herein, we have solved the effective mass Hamiltonian in cylindrical coordinates using a finite difference technique4 for the core-shell nanowires where the core and the shell are made of different alloys. In figure I. (b), a schematic representation of one of the investigated nanowire heterostructures consisting of a radial Type I junction of a compressively strained GeSn core and tensile strained GeSiSn shell. Moreover, in order to quantify the effect of doping concentration and the radius of the core on the spatial localization of electrons and holes densities inside the nanowire, we present in Figure I. (a) the calculated effect of the doping concentration on the electronic confinement for a Ge0.90Sn0.10/Ge core-shell nanowire for different core radiuses in the 10-40 nm range. In the case of relaxed nanowire heterostructures, we show that for an indirect band gap Ge0.9Sn0.1 binary alloy localized at L symmetry point, above a doping concentration of 5×1016 cm-3and below a core radius of 20 nm, the electron density is localized in the Ge shell.  Above this concentration, electrons are confined in the core. This change in localization of electron in core/shell nanowire, corresponds to a transition where the electron gas in the middle of the core becomes strongly localized in the heterojunction core/shell interface or beyond. Based on these calculations, we will present and discuss a variety of novel electronic and optoelectronic devices. 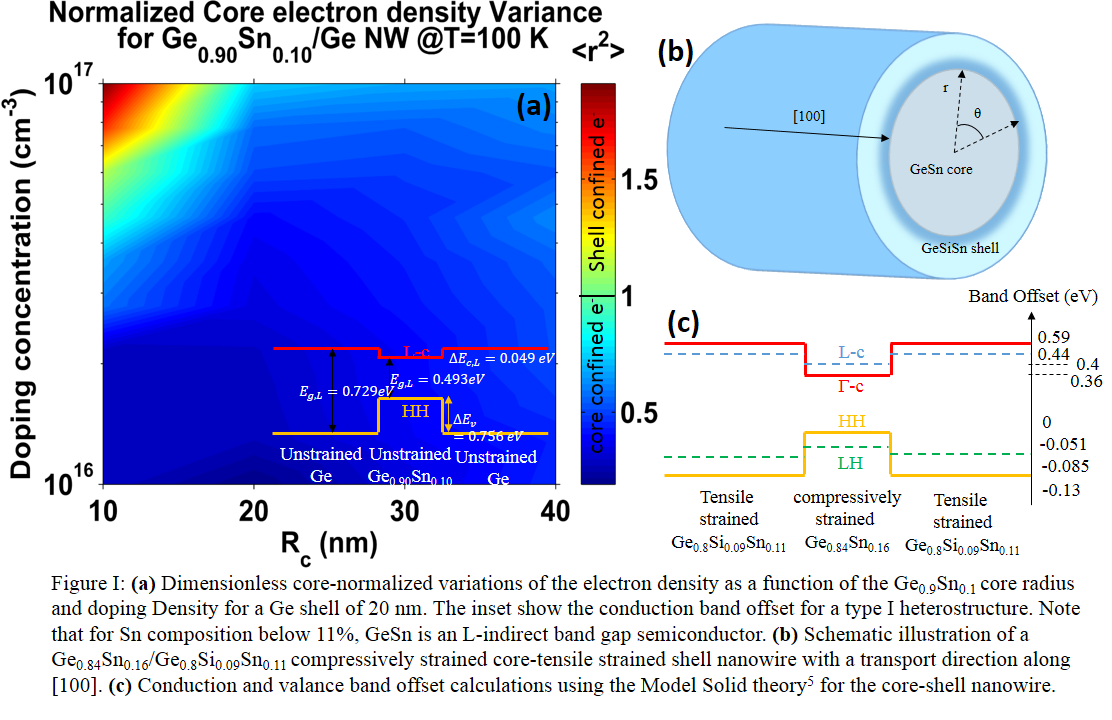