We have investigated an image sensor for future TV broadcast equipment, where pixel-parallel signal processing is needed. As shown in Fig. 1, three-dimensional (3D) device containing functional layers is made up of components such as photodiodes and signal processors through the pixel-wise vertical interconnections [7-9]. The signal from each photodiode is processed by the analog-to-digital converters within the pixel and read out in parallel. This new architecture allows a significantly large number of scanning lines than the conventional planar image sensors would do by the column-parallel signal processing architecture.

To implement the structure of the image sensor, we developed a fabrication process for 3D integration of fully depleted silicon-on-insulator (FDSOI) transistor substrates by Au/SiO2 hybrid bonding and XeF2 etching [2,8]. Figure 2 shows a test chip that was experimentally constructed to demonstrate the effectiveness of this approach. The chip consists of a back-illuminated photodiode layer (upper substrate) and a signal processor layer (bottom substrate).

Figure 3 illustrates the chip fabrication process. (a) FETs were first formed on FDSOI substrates. (b) Via holes were produced in the intermediate SiO2 layer by dry etching. (c) A Ti seed layer was deposited by sputtering and a Au film was formed by electroplating. (d) A Au/SiO2 hybrid surface was formed by chemical mechanical polishing (CMP), and the corresponding atomic force microscopy (AFM) image is shown in Fig. 4. (e) The hybrid surface was treated sequentially with Ar and O2 plasma, and the substrates were cooled to 15 °C to promote the absorption of water molecules on their surface. (f) The substrates were directly bonded using a force of 2000 N for 60 min at 200 °C and 1 Pa (Fig. 5(a)). (g) The Si handle layer of the upper substrate was removed to allow the light transmission to the photodiode. The handle layer was first thinned to 40 µm (Fig. 5(b)). (h) The remaining Si was removed by 75 cycles of XeF2 etching at 400 Pa for 30 s. Since the buried SiO2 acted as a natural etch stop, a completely smooth back surface could be obtained, as shown in Fig. 5(c). Figure 6 shows a cross-sectional scanning electron microscopy (SEM) image of the fabricated chip. Following the removal of the Si handle layer, the remaining thickness of the upper substrate was 6.5 µm. The alignment error was determined to be less than 3 µm and no interfacial voids were identified. From these results, it was concluded that a 3D test chip was successfully developed using the proposed method. This process is promising to stack more than 3 layers of substrate by repetition and to form additional backside electrodes [9].

In conclusion, an experimental test chip was successfully fabricated using the Au/SiO2 hybrid bonding and the XeF2 etching to demonstrate the 3D integration of image sensor. The results clearly indicate the feasibility of fabrication method toward image sensors. 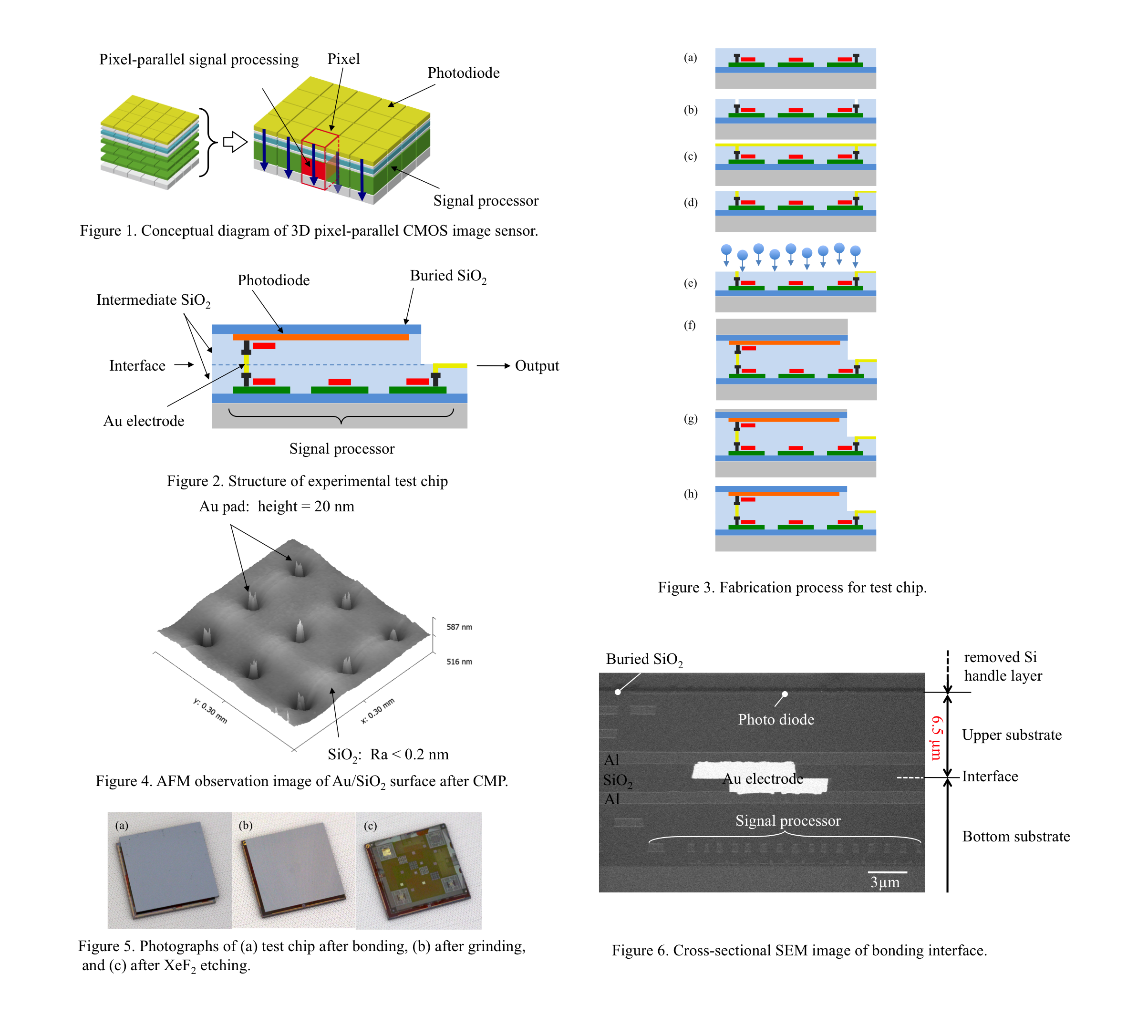