Expo Center, 1st Floor, Universal 8 (Moon Palace Resort)
K. Kostecki, M. Oehme, R. Koerner (University of Stuttgart), D. Widmann (Institute for Semiconductor Engineering), M. Gollhofer, S. Bechler (University of Stuttgart), G. Mussler, D. Buca (Forschungszentrum Juelich), E. Kasper, and J. Schulze (University of Stuttgart)
The fabrication of GeSn layers is one of the worldwide current areas of research in material science. The driving force behind it, is the possibility to realize a group IV direct bandgap semiconductor. Theoretical calculations show values between 10 % for relaxed GeSn crystals and 6 % for tensile-strained GeSn crystals. However, only its synthesis on Si substrates is of interest for the photonic components applications. For the manufacture of GeSn based components on Si substrates, a specific Ge VS (virtual substrate) has to be first realized in order to overcome the large lattice mismatch (≥ 4.2 %). This method has been developed by Kasper et al. for SiGe heterostructures on Si and its here used to provide, without epitaxial break, the desired lattice constant for the grow of Sn based alloys. The use of such VS minimize the number of the threading dislocations as required for high performance optical devices.

The significant progress made in recent years allowed the demonstration of GeSn based electro-optical components integrated on Si.

A compressively strained heterostructure can by relaxed by various methods. These are, for example, special annealing steps, increasing the layer thickness over the critical thickness tcrit or by means of point defects introduced during low temperature growth. If a Ge or GeSn film is deposited directly on Si it relaxes very quickly since the critical thickness is only a few nanometer thick. At the same time the threading dislocation density is extremely high. An alternative is an ultra-thin Ge VS developed in the last few years. The threading dislocation density is significantly reduced by high temperature annealing steps close to the melting point of Ge. This technology is used here as a basis for GeSn structure growth.

The optical properties of the GeSn layers with 2 % and 4 % Sn content are addressed via pin photodetectors fabrication (see Fig. 1). As a reference the GeSn pin detectors were manufactured without VS directly on Si. An overview of the layer structures are shown in figure 2.

The strain statuses of the individual samples were analyzed by RSM (reciprocal space mapping). These show that the samples on Si are 100 % strain relaxed and the samples on Ge VS are still under 50 % rest compressive strain.

The dark current of the individual samples are shown in the figure 3. The GeSn samples grown directly on Si show a much higher dark current due to the significantly higher threading dislocation densities compared to the samples on Ge-VS. At a bias of -1 V, the dark current is increased by more than one order of magnitude. In Figure 4, the optical responsivity of each sample is shown as a function of wavelength. 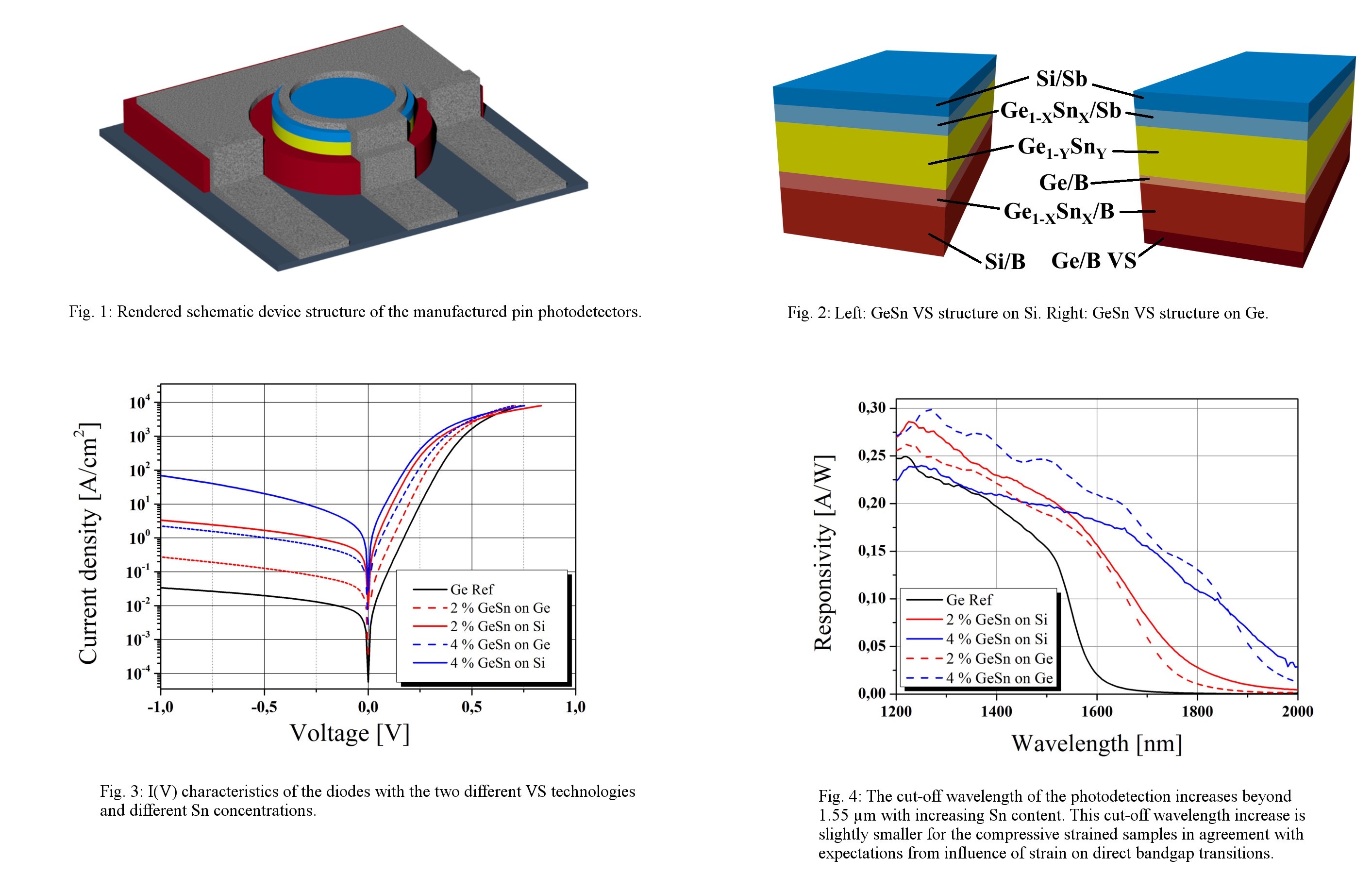