Expo Center, 1st Floor, Universal 20 (Moon Palace Resort)
T. Sasago, S. Yamahori, and H. Nohira (Tokyo City University)
The practical use of power devices that use SiC has already been reported. However, performance of a SiC MOSFET has not reached the level predicted based on the physical properties of SiC. One of the reasons is that interface state density (Dit) at SiO2/SiC is more than an order of magnitude higher than that at SiO2/Si. Therefore, the reduction of the Dit is important for device performance improvement. Many studies have been performed to reveal the origin of Dit. [1] Also some types of interface defects have been identified, such as carbon clusters, Si/C dangling bonds, and silicon oxycarbides (SiOxCy) species. [2] However, the chemical structure of the interface transition region still remains unclear, resulting in the insufficient understanding of the origin of Dit and the atomic structure of SiO2/SiC interface. Therefore, it is possible to reveal the formation process of SiO2/SiC interface structure by oxidation, to control the interface structure on the basis of the knowledge, the key for improving the performance of the SiC MOSFET. In this paper, we report the results of an examination of the changes in chemical bonding state of SiO2/SiC structure with the progress of thermal oxidation using angle-resolved X-ray photoelectron spectroscopy (AR-XPS).

4H-SiC C-face epitaxial films with 4° off-oriented were used in this study. The samples were prepared as follows. The sample was cleaned in the mixture of H2SO4 and H2O2 (H2SO4:H2O2=4:1) at 80-85 ºC, and the native oxide was removed by dipping in 5% hydrofluoric acid (HF) followed by a rinse in deionized water. The sample was oxidized at 800 °C in dry oxygen with a pressure of 133 Pa. Then, the sample was oxidized in dry oxygen with a pressure of 133 Pa at 850 °C. The Si 2p, O 1s and C 1s photoelectron spectra, excited by monochromatic AlKα radiation, were measured at a photoelectron take-off angle of 15 and 90 ° with an energy resolution of 0.37 eV and an acceptance angle of 3.3 °, using an ESCA-300 manufactured by Scienta Instruments AB [3].

Figures 1 (a) and (b) show Si 2p and C 1s photoelectron spectra arising from the sample, respectively. Here, these spectra are normalized by Si 2p and C 1s photoelectron intensity arising from SiC substrate. Figures 1 (c), (d) and (e) show the decomposed Si 2p3/2 and C 1s spectra, respectively. As seen in Fig. 1 (a), the oxide increases with the increase of oxidation time. As seen in Fig. 1 (b), components present in the unoxidized sample is reduced by the oxidation. The measured spectra in Si 2p and C 1s regions were also decomposed into peaks superposition of Gaussian and Lorentzian as shown in Figs. 1 (c), (d) and (e). [4] Figure 2 shows the oxidation time dependence of oxide thickness. As seen in Fig. 2, the oxidation rate decreases at the oxide thickness of 0.9nm and 1.5nm (Δt = 0.6nm). This implies that the oxidation rate is changed to reflect the crystal structure.

This work was partly supported by the MEXT-Supported Program for the Strategic Research Foundation at Private Universities 2009-2013, and by the Strategic Information and Communications R&D Promotion Programme (SCOPE) from MIC, Japan. 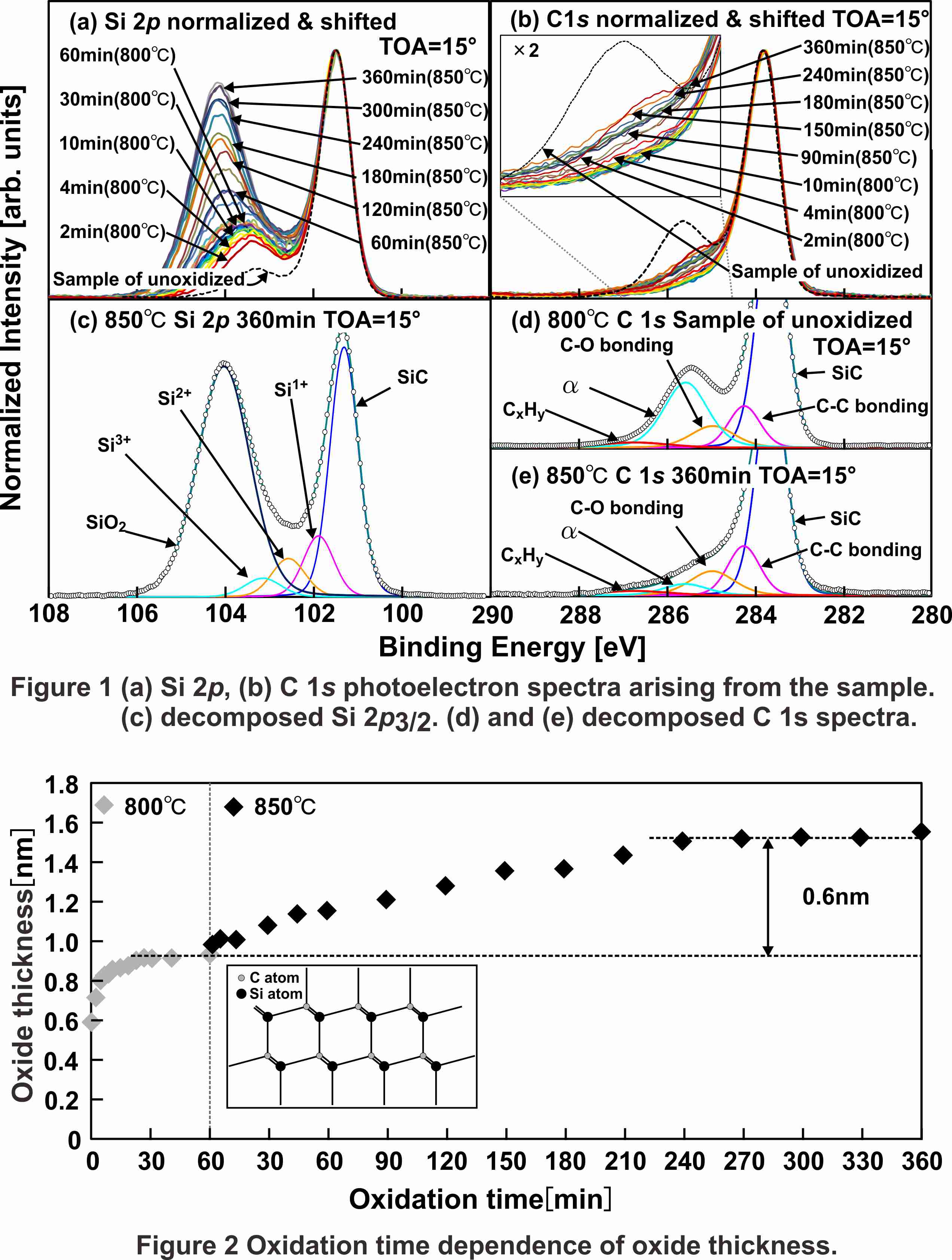