Expo Center, 1st Floor, Universal 17 (Moon Palace Resort)
M. Jelinek (Infineon Technologies Austria AG), J. Laven (Infineon Technologies AG), M. Rommel (Fraunhofer Institute for Integrated Systems and Device Technology), W. Schustereder (Infineon Technologies Austria AG), H. J. Schulze (Infineon Technologies AG), L. Frey (Fraunhofer Institute for Integrated Systems and Device Technology), and R. Job (Department of Electrical Engineering and Computer Science, Muenster University of Applied Sciences)
Proton-implantations are valued for their ability to modify the properties of semiconductor grade silicon over a wide spatial range spanning four orders of magnitude between a depth of about 100 nm and 1 mm at comparatively low thermal budgets. At moderate proton doses up to about 1×1013 cm‑2 and low annealing temperatures at about 300 °C, proton implantations are used to tailor the carrier life-times in bipolar power semiconductor devices. A large number of deep-level defects are known to form in this parameter regime. At higher doses and higher temperatures proton implantations may be used for modifying the doping profile of the silicon substrate by the creation of hydrogen-related thermal donors. While a large number of studies have investigated deep-level defects induced in the parameter regime typical to life-time tailoring, only few are concerned with the deep-level defects remaining in the samples.

In this report we give a brief review of the principal mechanisms of deep-level defect formation after proton irradiation and subsequent annealing of float zone-grown crystalline silicon. Various reaction paths commonly related to vacancy-complexes, interstitial oxygen and hydrogen are discussed. In the experimental part of the study, new DLTS measurements of proton-irradiated pn-diode structures are presented. The study focusses on the regime of elevated doses and annealing temperatures, typically used for proton-implantation doping. The results suggest that for the increased doses used, some of the detected defects show a thermal stability differing from that reported in literature. At least for some of these defects, this may be due to their higher initial concentration. In addition, other defects may appear at higher temperatures as decay products of other, thermally more stable, defects induced by the high-dose implantations.

For the first time, we also report on two defect levels at 300 meV and 418 meV below the conduction band with a metastable behavior. The observed levels and their behavior show a high similarity to a negative-U defect known from samples implanted at 88 K without any further thermal budget above room temperature. To our knowledge, these levels have not been detected in a sample annealed above room temperature before.

The figure depicts possible reaction paths of vacancies in crystalline silicon under the presence of extrinsic hydrogen and oxygen. Many of these defects lead to localized levels in the silicon bandgap and can therefore impact the electrical properties of a device. The actual appearance of a defect is however determined by the activation energy for its formation together with the applied process temperatures. If known from literature, the activation energy for each reaction path is indicated. 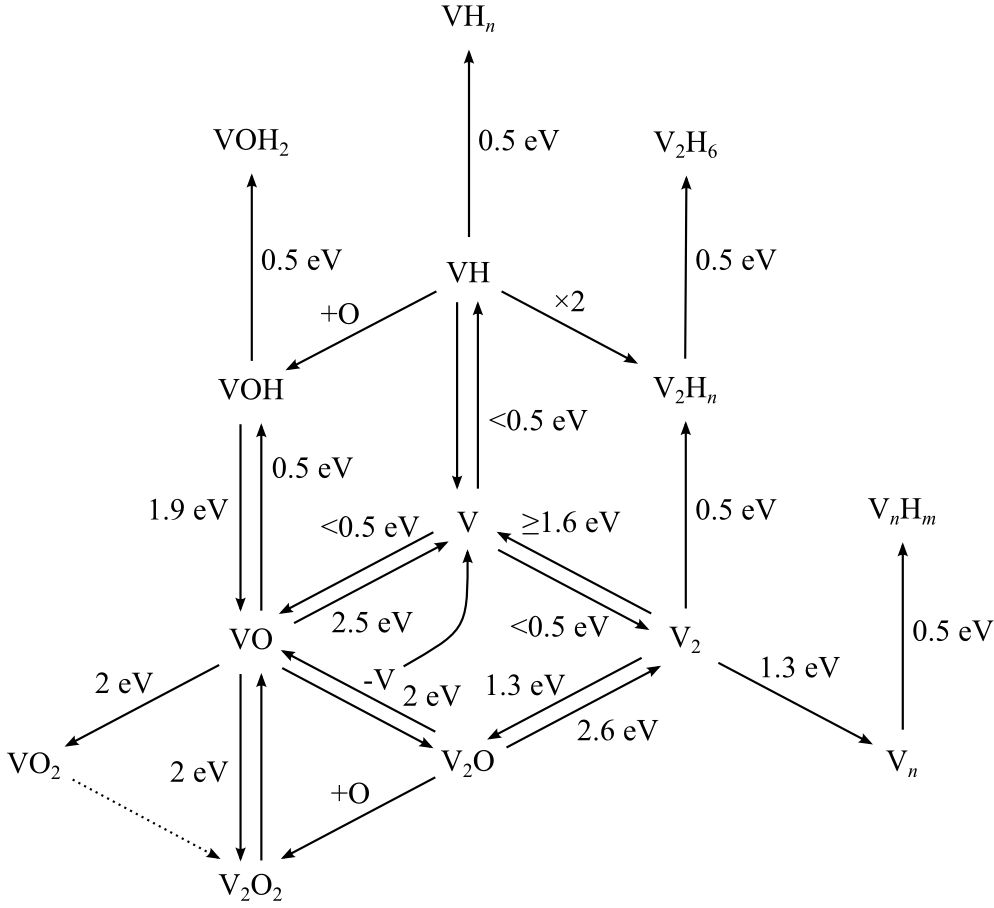