Heat treatments of Cz Si in the temperature range between 400 and 1200°С result in the aggregation of supersaturated interstitial oxygen leading to the formation of bulk defects. At low temperatures in the range between 450 and 650°C, the formation of small clusters (O3, O4) leads to shallow thermal donor (TD) centers. The presence of carbon has a considerable influence on thermal donor formation due to the small size of the substitutional carbon atom leading to a tensile stress field around it.

In this study, a low-temperature method is developed for the creation of shallow р-n junctions using carbon ion implantation controlled TD formation. The described approach can be used for different applications, in particular, for photo-converters manufacturing, as low temperatures do e.g. not lead to lifetime degradation of non-equilibrium charge carriers.

(001) Cz Si wafers with oxygen concentration of about 8×1017 сm- 3 are implanted by carbon ions with an energy of 20 keV and doses between 6.0×1012 and 1.3×1015 cm- 2. After implantation, thermal annealing at temperatures between 550 and 750°С is performed during 20 to 300 minutes in argon ambient. Investigations of electro-physical properties of the structures are performed using the admittance method. This method allows to obtain information about the concentration and energy position of levels in the forbidden gap of the semiconductor that are responsible for the observed frequency dependence of capacitance in these structures. The type, size and concentration of structural defects in the investigated silicon samples are investigated using X-ray diffraction and diffuse scattering.

It is shown that the concentration of TD's depends on annealing temperature and dose of carbon ions. The maximum concentration (3×1016 cm-3) of TD's is observed after annealing at 650°С and for a carbon dose of 6×1013 cm-2. Annealing at 750°С leads to an annihilation of the TD's.

The temperature dependence of CVC's is shown in the figure for high-frequencies of the test signal (3 MHz). This dependency has a clear maximum of capacity in the voltage range from - 6 to 3 V. The existence of this maximum in the CVC indicates that in a certain part of the investigated structure there is an electric charge storage due to the creation of a considerable concentration of TD's near the surface of the p-type substrate. Analysis of the temperature dependence of the capacitance integral within the limits of the voltages, where this peak is observed, had been carried out. The value of the integral that is equal to the peak area under the CVC curve has been calculated, allowing to extract an activation energy for the TD's of 0.012 eV in the temperature interval between 25°С and 160°С.

X-ray diffuse dispersion measurements are also performed on the samples containing TD's and reveal that the signal intensity increase correlates with an increase of TD concentration. After annealing at 650°С, the scattering intensity and the related concentration of point defects are at maximum. Annealing at 750°С leads to a decrease of the concentration of interstitial defects and of TD's. The nature of investigated TDs is related to interstitial and oxygen complexes. The implanted carbon is a stimulating factor for the gettering of oxygen, defect nucleation and growth of TD's. 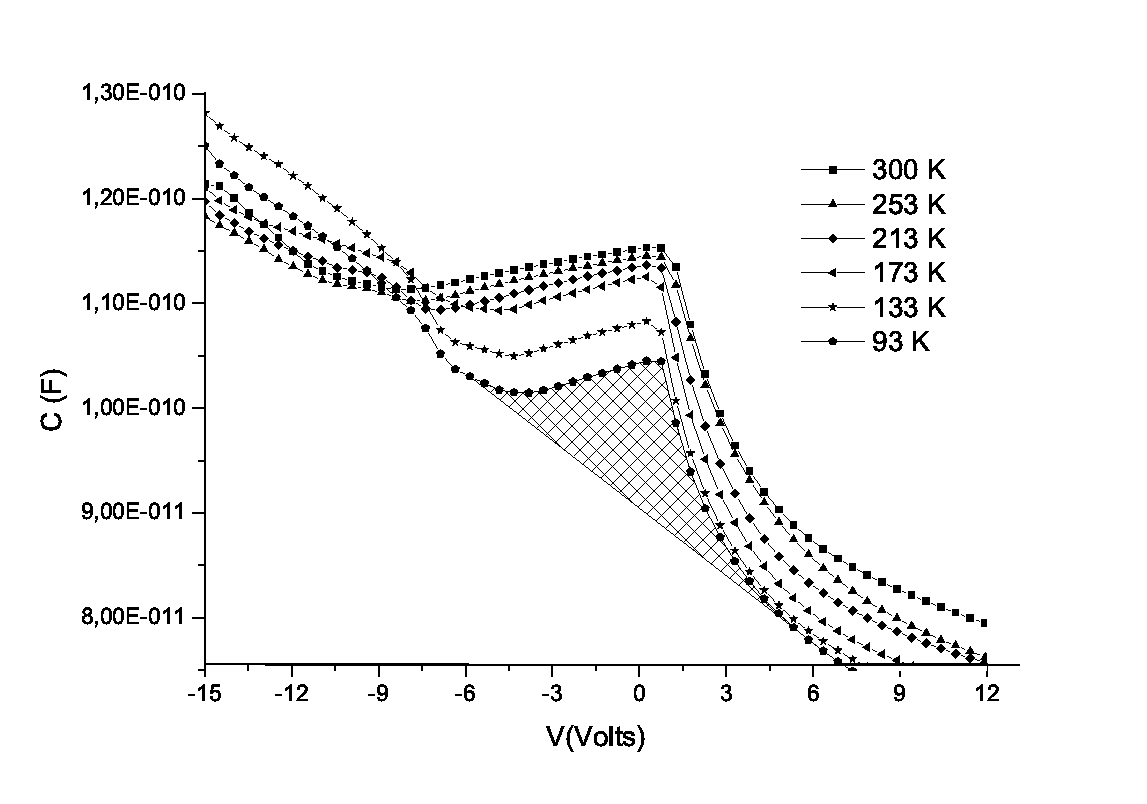