Expo Center, 1st Floor, Universal 17 (Moon Palace Resort)
M. Jelinek (Infineon Technologies Austria AG), J. Laven (Infineon Technologies AG), R. Job (Department of Electrical Engineering and Computer Science, Muenster University of Applied Sciences), W. Schustereder (Infineon Technologies Austria AG), H. J. Schulze (Infineon Technologies AG), M. Rommel, and L. Frey (Fraunhofer Institute for Integrated Systems and Device Technology)
Proton-implantation doping offers a feasible method to modify the doping profile in semiconductor grade silicon in depths ranging up to several hundred micrometers at comparatively low thermal budgets. The hydrogen-related donors are radiation-induced defect complexes decorated by hydrogen. During the proton implantation, typically in the energy range of several 100 keV to several MeV and with fluences in the range between about 1013 cm‑2 and 1015 cm‑2, intrinsic radiation defects are induced. During a successive anneal in the temperature range between about 300—500 °C the implanted hydrogen diffuses from its projected range through the radiation damage profile and decorates the radiation-induced defects or defect complexes, thus activating, the hydrogen-related donors. Due to this basic mechanism, the profile shape of the hydrogen-related donor profiles is closely correlated to the initial damage profile of the radiation-induced lattice defects. The profiles, hence, exhibit an extended penetrated range with an approximately constant concentration followed by an expressed peak near the end-of-range of the protons.

The achievable doping concentration of the hydrogen-related donors induced by the proton implantation and successive annealing is, however, typically limited to a few 1015 cm‑3. Earlier studies, based mainly on co-implantations of helium and hydrogen, have led us to propose this to be due to an over-decoration effect of the hydrogen-related donors by excess hydrogen. Based on this assumption, we present a pre-conditioning method based on vacancy-related gettering sites in order to reduce the concentration of excess hydrogen. The procedure comprises a pre-implant with protons and an annealing step at elevated temperatures above the range typically used for proton-implantation doping and is thus fully applicable to a commercial manufacturing environment. During this pre-conditioning, thermally stable higher-order defect complexes are created that are for the most part electrically inactive. These defect complexes act as gettering centers and may in effect reduce the concentration of free hydrogen after a second implant. Experimental results based on spreading resistance measurements are presented in this report that clearly show the beneficial effect of the pre-conditioning and its ability to help overcome several limitations of proton-implantation doping of high-purity silicon.

The figure illustrates the effect of the new pre-conditioning method on two magnetic Czochralski-grown silicon wafers. The dashed line represents the carrier concentration profile after a 3-MeV implantation with a proton dose of 4×1014 cm-2 and subsequent annealing at 490 °C for 5 h. The solid line depicts a profile resulting from the same main process steps where the wafer has been pre-conditioned before.  It appears that the peak concentration could be increased by a factor of 3 to approximately 2×1015 cm-3. For consecutive studies it may also be of interest that the pre-conditioning results in a steadily increasing carrier concentration up to a depth of 80 µm from the surface. 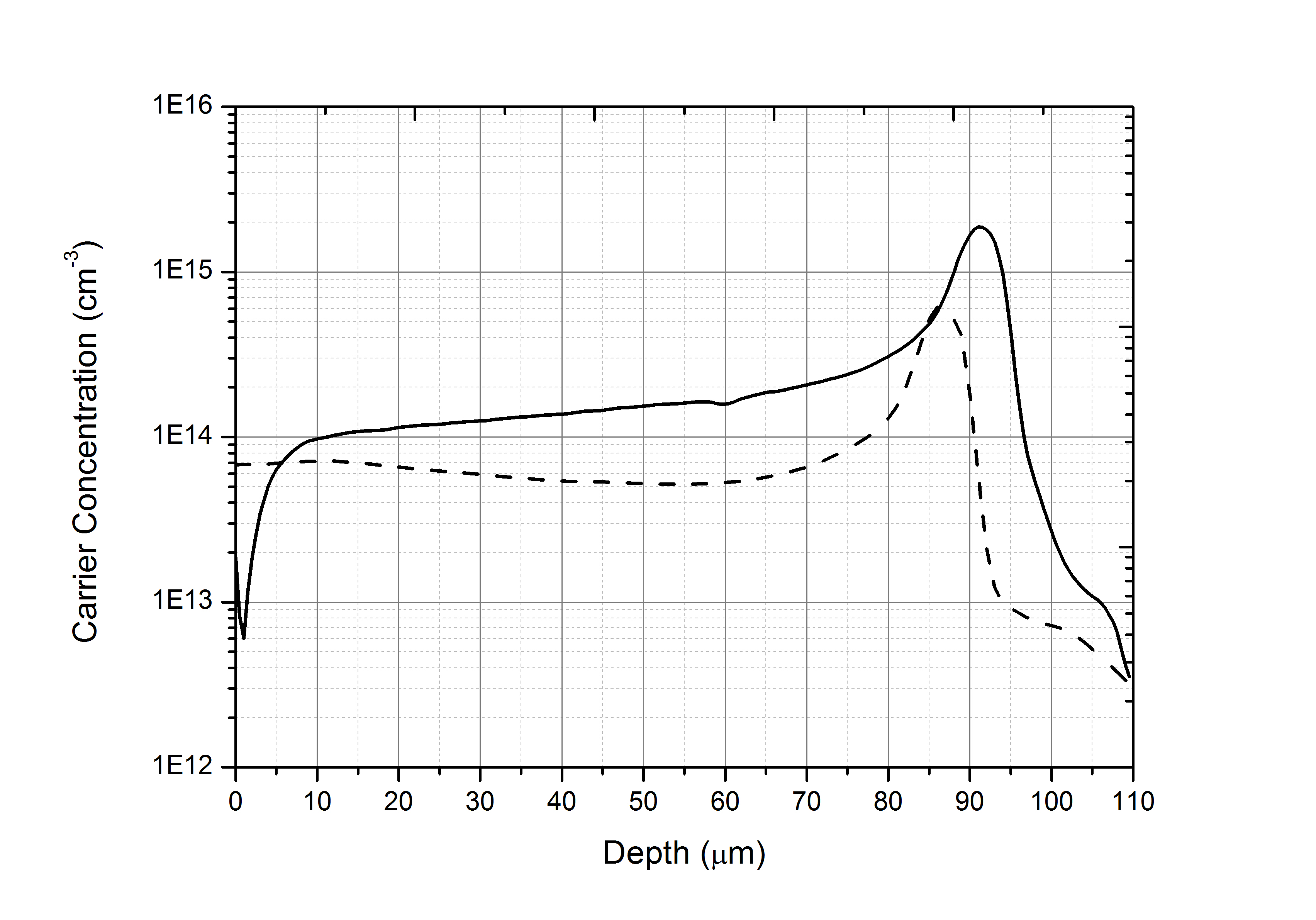