The study is carried out on 300mm, lightly p-doped Si wafers. Substrates have been oxidized by plasma or thermal treatment in order to create 1.5, 20 or 145nm SiO2 sub-layer. 20 nm-thick amorphous alumina (a-Al2O3) films were then deposited at low temperature (300°C) by ALD using TMA and H2O precursors. Some samples were annealed at various temperatures under nitrogen or oxygen atmosphere in order to crystallize the amorphous alumina. Due to low chemical resistance of the amorphous ALD Al2O3layer, the wafers were just rinsed with de-ionized water under megasonic power, dried and contacted to each other or directly to silicon wafers or oxidised silicon wafers at room temperature (RT) and atmospheric pressure. Bonding quality is analysed at room temperature and after various annealing temperatures.

This paper will deal with bonding mechanism and the defect origin. We will highlight the role of water/hydrogen diffusion in the bonding process and the link that could be done with the well-known [4][7] defects which could appear during O2-atmosphere annealing of amorphous ALD Al2O3 free surfaces (fig2a) while no defect are seen under N2annealing (fig2b).

Using atomic force microscopy to measure the surface roughness, the electron beam microscopy to visualize the debonding interface, the anhydrous bonding energy measurements, the FTIR-MIR [8] to characterize the chemical interface evolution and the X-ray reflectivity for monitoring the interface electron density profile, all the different bonding structures achieved in this study have been analysed (preannealing, sublayer use…).

One of the first applications of this work would be the elaboration of high quality SOI structure having this ALD Al2O3layer as an insulating layer.

The authors would like to thank SOITEC for its support. 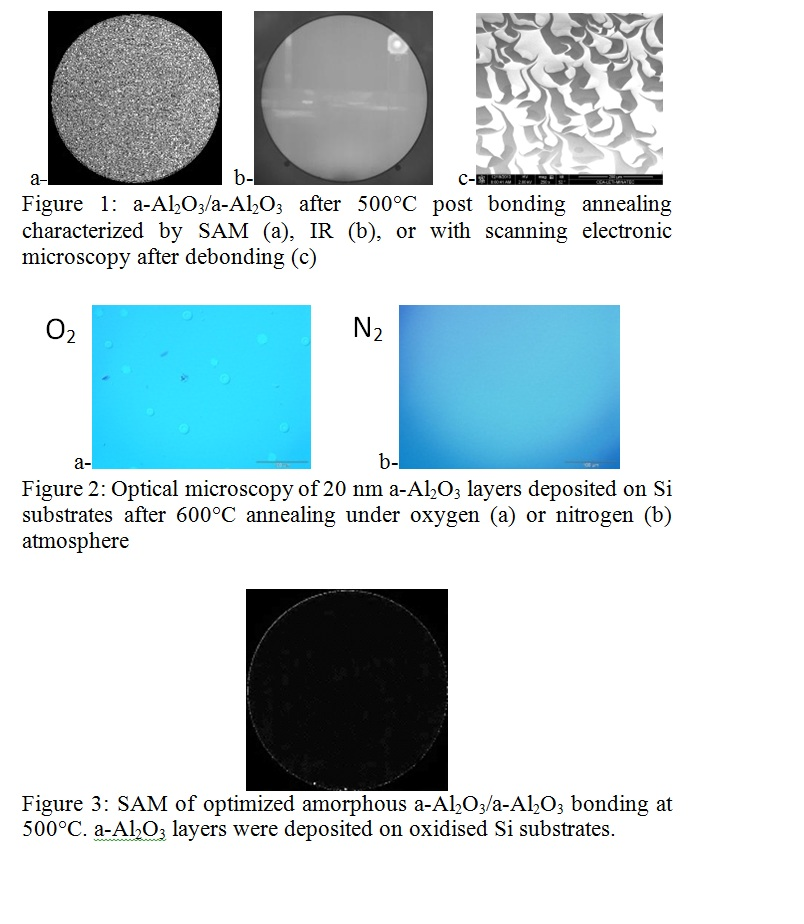