Formation of a low-resistance shallow n+/p junction is one of the key issues for enhanced performance of Ge n-channel MISFETs.  In particular, for n-type dopants such as P and As, it is well-known that activated dopant concentration in Ge are saturated to be around 1018~1019 cm-3 after the annealing at 500 ºC [1].  In cumulative research knowledge on ion implantation into Si, the recrystallization process and dopant activation are strongly dependent on the substrate temperature during the implantation and the destruction of crystalline structure just after ion implantation is a crucial factor for dopant activation in the implanted layer [3].  In fact, it is also reported that pre-amorphous implantation (PAI) is effective to enhance amorphization and to form shallow junction on Si substrate [4].

P-type Ge(100) wafers with a resistivity of 0.1-0.5 Ω∙cm were used in this study.  After the removal of Ge surface native oxide by wet-chemical cleaning, a 7 nm-thick SiO2 layer was deposited by RF sputtering.  And then, As+ ions were implanted into the wafers at different temperatures ranging from 400 to -50 ºC at 10keV with doses of 1x1015 and 5x1015 cm-2.  TRIM simulation indicates the projected range (Rp) of around 8 nm from the sample surface.  For some samples, Xe or Ar ion implantation prior to As+ implantation was performed to amorphize a Ge surface layer. The activation annealing was carried out at 600 ºC in N2ambient.

For the cases without pre-amophization, the crystallinity of Ge layer just after As+ ion implantation at a dose of 1x1015 cm-2 was evaluated by Raman scattering spectroscopy for the sample implanted at different temperatures.  With decreasing substrate temperatures from 400 to -50 ºC, an increase in the broad amorphous Ge (a-Ge) peak at around 275 cm-1 and a decrease in the sharp crystalline Ge (c-Ge) peak at around 300 cm-1were clearly observable.  This result indicates that the re-crystallization of Ge layer occurs partially during the ion-implantation even at the room temperature.

To get a understanding of the As activation, chemical bonding features of As atoms for the samples implanted at room temperature (RT) and -50 ºC (dose: 5x1015 cm-2) were evaluated by using x-ray photoelectron spectroscopy (XPS) under monochromatized AlKα radiation (1486.6eV).  It is found that, from the signal intensity ratio of As1+ component to the total (As1+/(As0++As1+)), the As activation ratio was estimated to be 11% for the sample at RT implantation and 16% for the sample at -50 ºC implantation.  This result implies that advanced amorphization plays a role on the As activation with recrystallization.  Thus, we have characterized the samples with pre-amorphizing implantation (PAI) and further advanced amorphization in the implanted layer was confirmed by Raman scattering spectroscopy and spectroscopic ellipsometry.  Also, the sheet resistances measured by using a four-point probemethod for the samples after activation annealing at 600 ºC for 30sec show a marked decrease in sheet resistance for the sample with PAI (Fig. 1).  The result indicates that PAI is quite effective for efficient activation of implanted As in Ge.

A part of this work was supported by Research Institute for Nano-device and Bio Systems (RNBS) and Natural Science Center for Basic Research and Development, Hiroshima University, Japan. 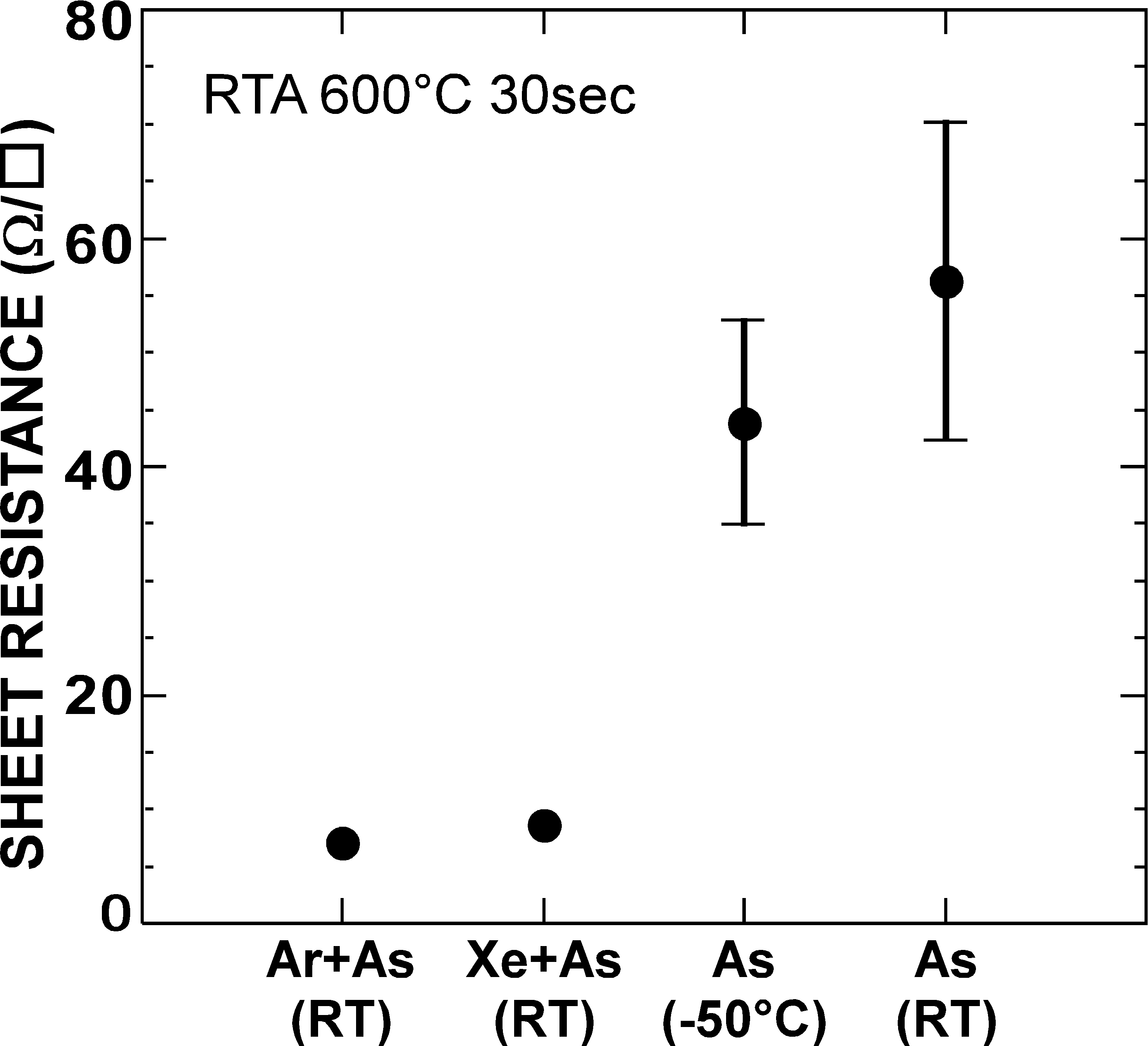