Expo Center, 1st Floor, Universal 11 (Moon Palace Resort)
D. Takeuchi, K. Makihara (Graduate School of Engineering, Nagoya University), A. Ohta (Nagoya University), M. Ikeda (Hiroshima University), and S. Miyazaki (Graduate School of Engineering, Nagoya University)
Nanometer-scale silicon structures have been attracted much attention because their novel functionalities such as multiple-valued charge storage [1], single-electron transfer [2], electroluminescence (EL) [3], and electron emission [4].  Recently, we have succeeded in stacking Si quantum dots (Si-QDs) self-aligned by a selective growth technique focusing on the 2nd formation of Si-QDs on pre-grown Si-QDs [3], and demonstrated stable near-infrared EL from the self-aligned Si-QDs in a diode structure with semitransparent Au top electrode and n-Si(100) substrate under forward bias conditions over a threshold voltage as low as +1.2 V [3].  In this work, to get an insight into ballistical electron transport through self-aligned Si-QDs, we extended our research work to the spatially-resolved characterization of electron emission from self-aligned Si-QDs formed on ultrathin SiO2/n-Si(100) by using a conductive cantilever.

Self-aligned Si-QDs with an areal density as high as ~1011 cm-2 were fabricated on ~1.0nm-thick SiO2 by process steps consisting of the first formation of Si-QDs by controlling low-pressure chemical vapor deposition (LPCVD) using pure SiH4, selective Ge-LPCVD from GeH4diluted with He, in-situ surface oxidation of the dots, thermal desorption of Ge oxide and subsequent 2nd formation of the Si-QDs.  After the slight oxidation of the dot surface and boundaries between the 1st and the 2nd formed Si-QDs at 850°C, semitransparent Au top electrodes and the Al back contact to n-Si(100) were formed by thermal evaporation.

The self-aligned formation of the Si-QDs with an areal as high as ~1011 cm-2and an average size of ~20 nm in diameter was confirmed by comparing topographic images taken just after the 1st Si-QDs formation and the 2nd one.  TEM images also confirm the formation of ~1nm-thick oxide layer in-between self-aligned Si-QDs after the slight oxidation.  In spatially-resolved characterization of electron emission from the align-dots through the Au top electrodes, current images were taken by using AFM in a non-contact mode keeping a distance of ~200nm from the sample surface by using a Au-coated Si cantilever with DC negative bias application to the Al back contact with respect to the grounded Au top electrode at room temperature in the atmosphere.  With DC bias application over -7V, non-uniform image contrast due to electron emission from localized area being almost the same size of Si-QDs, emerged and was enhanced exponentially with an increase in the applied bias.  From Fowler-Nordheim (FN) plots of observed field emission with an estimation of the potential drop in the topmost oxide on the self-aligned Si-QD, the emission current is likely to be limited by FN tunneling (Fig. 1).  Considering the work function difference between n-Si(100) and Au-top electrode, the quantized energy states of the aligned dots can be placed at energies higher than the vacuum level of the top electrode when the DC biases over -7 V is applied as shown in the inset of Fig. 1.  In tunneling from bottom to top dots, electrons can gain their kinetic energies efficiently as a result of reduced inelastic scattering..  Therefore, the observed electron emission is likely to be promoted by quasi-ballistic transport through aligned-dots structure.

This work was supported in part by Grant-in Aids for Scientific Research (A) No. 24246054 and Young Scientists (A) No. 25709023 from the Ministry of Education, Culture, Sports, Science and Technology, Japan and by JSPS Core-to-Core Program of International Collaborative Research Center on Atomically Controlled Processing for Ultralarge Scale Integration.  In addition, the author deeply appreciates that the samples were fabricated successfully by utilizing the clean room facilities of Hiroshima Univ. 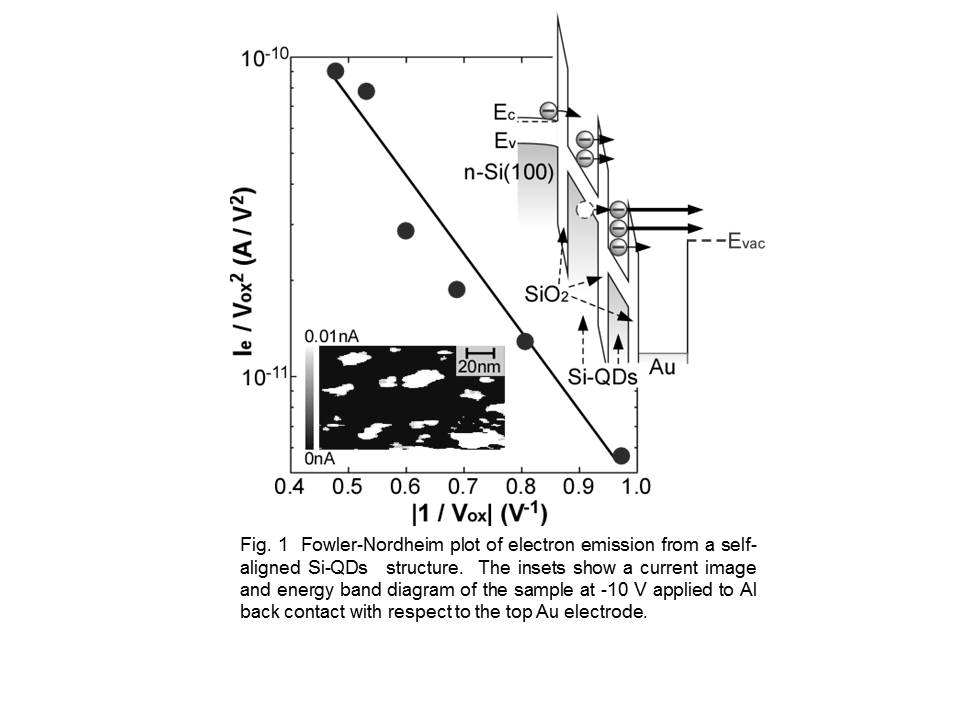