The gas composition is very important for reducing process temperature of PECVD. We have reported the SiH4 flow rate is most important parameter for controlling the deposition rate and the film quality in the PECVD using N2, H2, SiH4 gasses. The deposition rate strongly depends on the SiH4 flow rate; however the film quality was degraded with the increase of the flow rate [3]. The other parameters are considered to be also important in the PECVD. In this presentation, we describe effect of hydrogen on SiNx formation by the PECVD.

After native oxide was removed of silicon surface by HF solution, silicon nitride was deposited. The temperature set at 400 ̊C. Ar gas was used as the plasma excitation, and SiH4/N2/H2 mixture gases were used for the source gases. The microwave power, the deposition pressure were 2000 W and 1.7 Pa, respectively. The flow rates of SiH4, N2, and Ar were 0.5, 75, and 20 sccm, respectively. The gas flow rate of H2was varied from 0 to 45 sccm. The film density were measured by the X-ray reflectometry (XRR), and the N-H bonds in SiNx films were measured by Fourier transform infrared spectroscopy (FTIR), respectively.

Fig. 2 shows the film density of SiNx films measured by XRR for various H2 flow rates. The density is independent of the H2 flow rates. Fig. 3 shows the N-H bond concentration measured by FTIR for various H2 flow rates. The N-H bond concentration of 0 sccm case is much less than the others, and the concentration of other cases are almost the same. The Si/N ratio of SiNx measured by XPS of 0sccm case is 1-2 % less than the others. It is considered that the hydrogen effectively dissociate the SiH4 gas and makes the nitridation species (NHx), as the result, the hydrogen improves the reaction efficiency of SiH4and NHx.

This work was partially supported by JSPS KAKENHI Grant Number 22000010 and the synchrotron radiation experiments were performed at the BL46XU of SPring-8 with the approval of JASRI (Proposal No. 2012B1725). 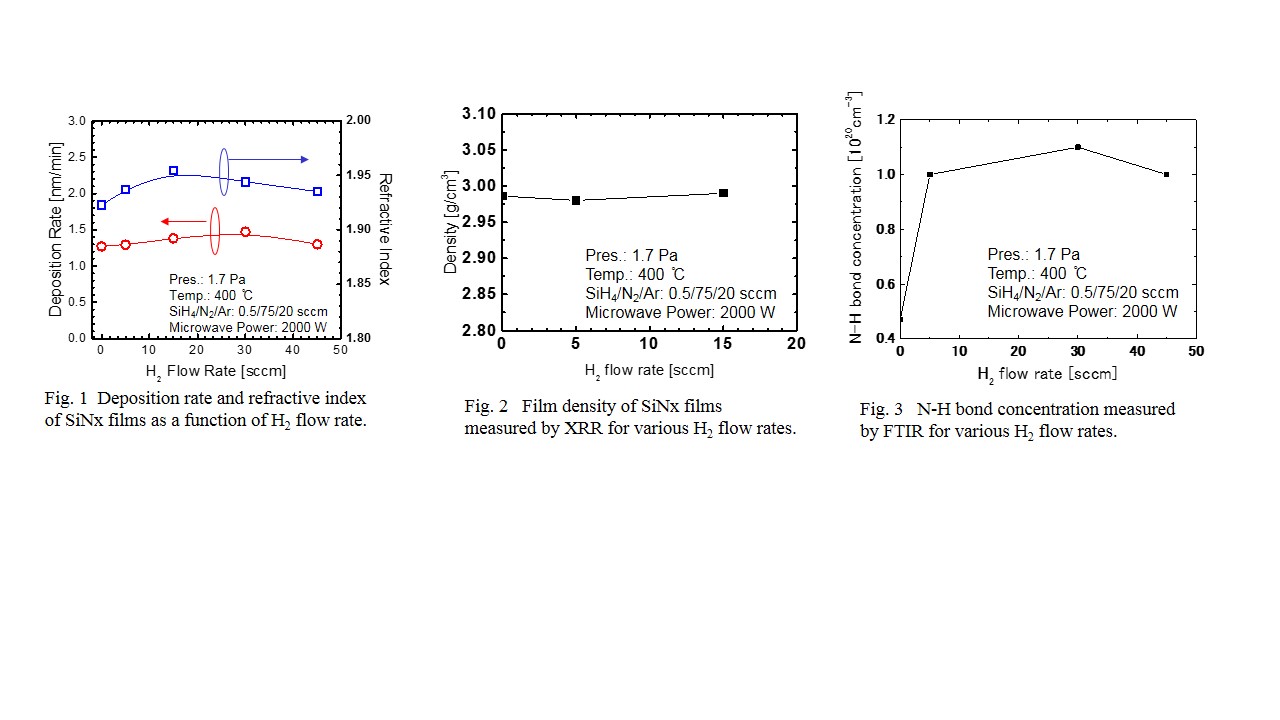