In the miniaturization of the large-scale integrated-circuit (LSI), gate oxide thinning is one of the most important techniques for the performance improvement. However, the ultimately thinned gate oxide causes in the failure with high leakage current. Thus, the evaluation and control of the gate oxide integrity is indispensable in the present LSI technology. In this study, we evaluated the origin of the gate oxide failure by Raman spectroscopy in conjunction with optical beam induced resistance change (OBIRCH) analysis.

Metal-oxide-semiconductor (MOS) capacitors were used as the samples. The 2.8 nm thick gate oxinitrid insulator film and the poly-Si gate electrode layer were formed on a P type Si substrate. The poly-Si layer was deposited at 620 oC with the SiH4 flow rate of 150 or 350 sccm. The gate oxide integrity was evaluated by the test element group (TEG) measurements. The failure was observed only for the 150 sccm SiH4 flow. The current-voltage (I-V) characteristics were shown in Fig. 1. The positions with high leakage current were specified by OBIRCH, and evaluated by Raman spectroscopy. One-dimensional measurements were performed for the Raman spectroscopy by using a quasi-line excitation source at the same time. Excitation laser was Nd:YAG laser (wavelength: 532 nm), and the focal length of the spectrometer was 2,000 mm. The length of the quasi-line laser was approximately 100 μm. We investigated the origin of the gate oxide failure by Raman Spectroscopy obtained at the leakage position determined by OBIRCH.

Figure 2 shows the light emission image obtained by OBIRCH at the MOS capacitor with gate oxide failure fabricated with 150 sccm SiH4 flow. We confirmed that there are two defect points in the MOS capacitor. Figure 3 shows the Raman intensity distribution across the leakage position in the sample. The higher Raman intensity than the surroundings was confirmed at the failure position. Figure 4 shows the distribution of the Raman shift and the full width at half maximum (FWHM) across the failure position. As shown in Fig. 4, we verified that the Raman peaks at the defect positions shifted toward the lower wave number compared with the other positions. It can be considered that the gate oxide failure was induced by the high tensile strain in the poly-Si layer, probably due to the lack of the SiH4 supply during the deposition. Furthermore, FWHM of Raman spectra were not different comparing with the other position. Thus, there is no difference in the crystallinity and the grain size of the poly-Si. In conclusion, we have evaluated the gate oxide failure with leakage current by Raman spectroscopy and found that the origin was high tensile strain in the gate poly-Si. 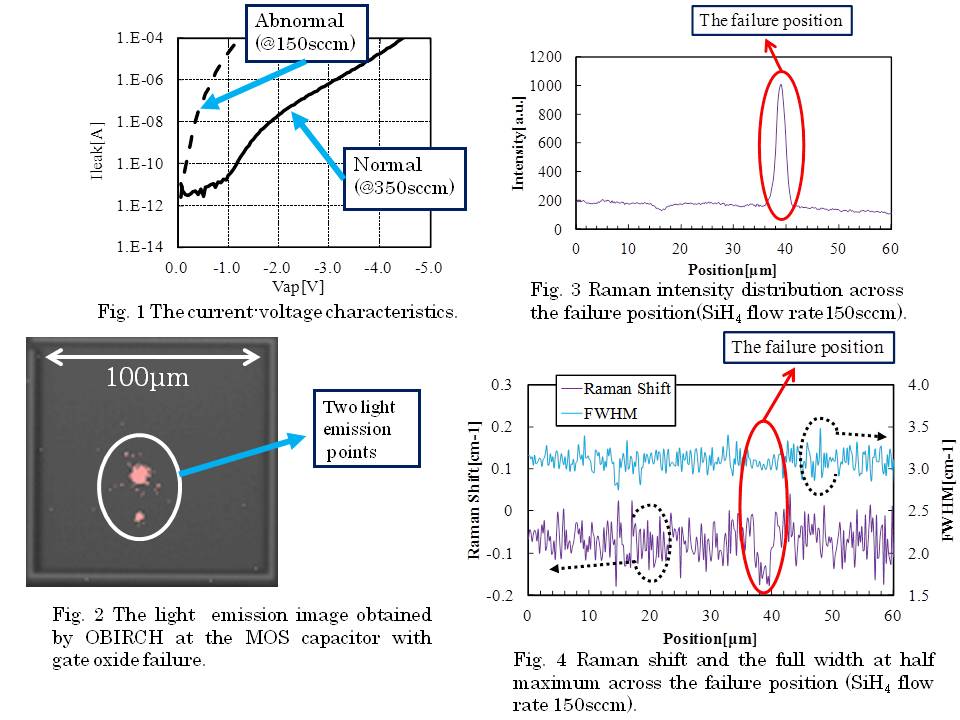