Conference Room 4M (Hilton Chicago)
Y. M. Ding and D. Misra (New Jersey Institute of Technology)
Aggressive downscaling of effective oxide thickness (EOT) requires improvement in gate leakage current and interfacial characteristics. Recently other materials like Al, Zr, and La are introduced into HfO2 to further reduce the EOT and improve the reliability. Since the structure of the HfO2-based dielectric changes with addition such materials it is required that the impact of structural change on the interface needs to be investigated. In addition, the effect series resistance（Rs）associated with the substrate and contact needs to be excluded. In this work we have used metal oxide semiconductor capacitor (MOS-C) devices of 3nm HfAlO/ 0.5nm SiO2/Si gate stack by different preparation methods (different Al doping, post annealing temperatures, deposition stacks) to characterize the quality of interface. Interface defect densities were evaluated by conductance method (1) while excluding any series resistance effect.

13 samples were prepared with 5 angstrom of interfacial layer SiOx, intentionally deposited on the Si substrate by vapor ozone treatment prior to depositing the high-k layer by atomic layer deposition (ALD) in a 300 mm TEL Trias™ cleanroom tool at TEL Technology Center. The metal gate was prepared by 5nm ALD TiN followed by 50nm physical vapor deposition (PVD) TiN. The substrate was of p-type Si (001) orientation with a.doping concentration of approximately 1015cm-3. Small signal capacitance and conductance measurements were investigated by HP4284 LCR analyzer. It is known that depending on the post-deposition annealing (PDA) temperatures Al doped HfO2 changes its structure from amorphous to tetragonal reducing its EOT (2).

It was observed that Dit is dependent on the EOT of hafnium aluminum oxide. The amorphous structure has the lowest Dit (2.76) whereas tetragonal HfO2 (t-HfO2) has the highest Dit (1.27). The Dit values of other EOT are within the range of observed highest and lowest values as EOT, as shown in Fig.1. It is expected that Dit value are affected both by the oxide phase structure and interfacial layer thickness since Aluminum doping could impede the growth of the interfacial layer. The decrease in interfacial layer will significantly impact the interface defects as they are closer to interface, this was observed when annealing temperature was 800°C (3). However, in the low annealing temperature with addition of Al the dielectric constant of oxide decreases insignificantly to changed EOT without reducing Dit. 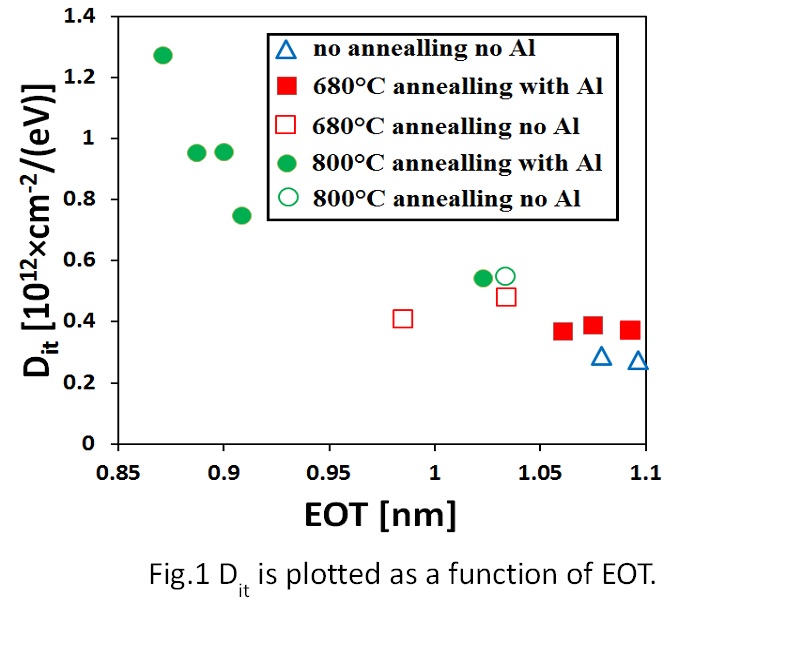