Phoenix East (Hyatt Regency)
Y. Matsumura (Tokyo University of Technology) and T. Yoshimura (Tokyo University of Technology)
Light-harvesting antennas in the photosynthesis systems of plants are known to be high-efficiency photon collectors. Here we use light-harvesting antennas in dye-sensitized solar cells.1 The concept of spectral sensitization of ZnO by light-harvesting antennas composed of multiple stacked dyes is shown in Fig. 1. Dyes with different energy gaps are stacked in a designated sequence so that a wide range of wavelengths are absorbed. The resulting broad absorption spectrum is a superposition of the narrow absorption bands of the individual dye molecules. This energy scheme is expected to decrease the heat generation caused by excess photon energy in the light absorption process.2

Meier5reported that p-type dyes such as rose bengal (RB), eosin (EO) and fluorescein (FL) tend to have negative charge because they accept electrons, while n-type dyes like crystal violet (CV) and brilliant green (BG) typically have positive charge as they donate electrons. Because ZnO is an n-type material, as shown in Fig. 2, three-dye stacked structures can be grown using a single dye in each step by providing source molecules with a sequence of p-, n-, and p-type. Here, the LP-MLD process was achieved by electrostatic force. Namely, the attraction between p–n and repulsion between p–p and n–n molecules resulted in self-limiting growth, allowing us to construct structures of [n-type ZnO/p-type dye/n-type dye/p-type dye].

It is important to arrange the dye molecules so that an energy-level scheme with a gradual energy slope similar to that of light-harvesting antennas in plants is formed. This facilitates electron transfer from the multi-dye stacked structure to the semiconductor to achieve high-efficiency sensitization. Fig. 4(b) shows an energy-level scheme determined from photoemission yield spectroscopy in air (PYSA)6measurements for [ZnO/EO/CV/RB]. The direction of the energy slope is opposite to the preferred direction. As a future challenge, to further improve sensitization efficiency, the energy-level scheme of the dye molecules should be optimized. 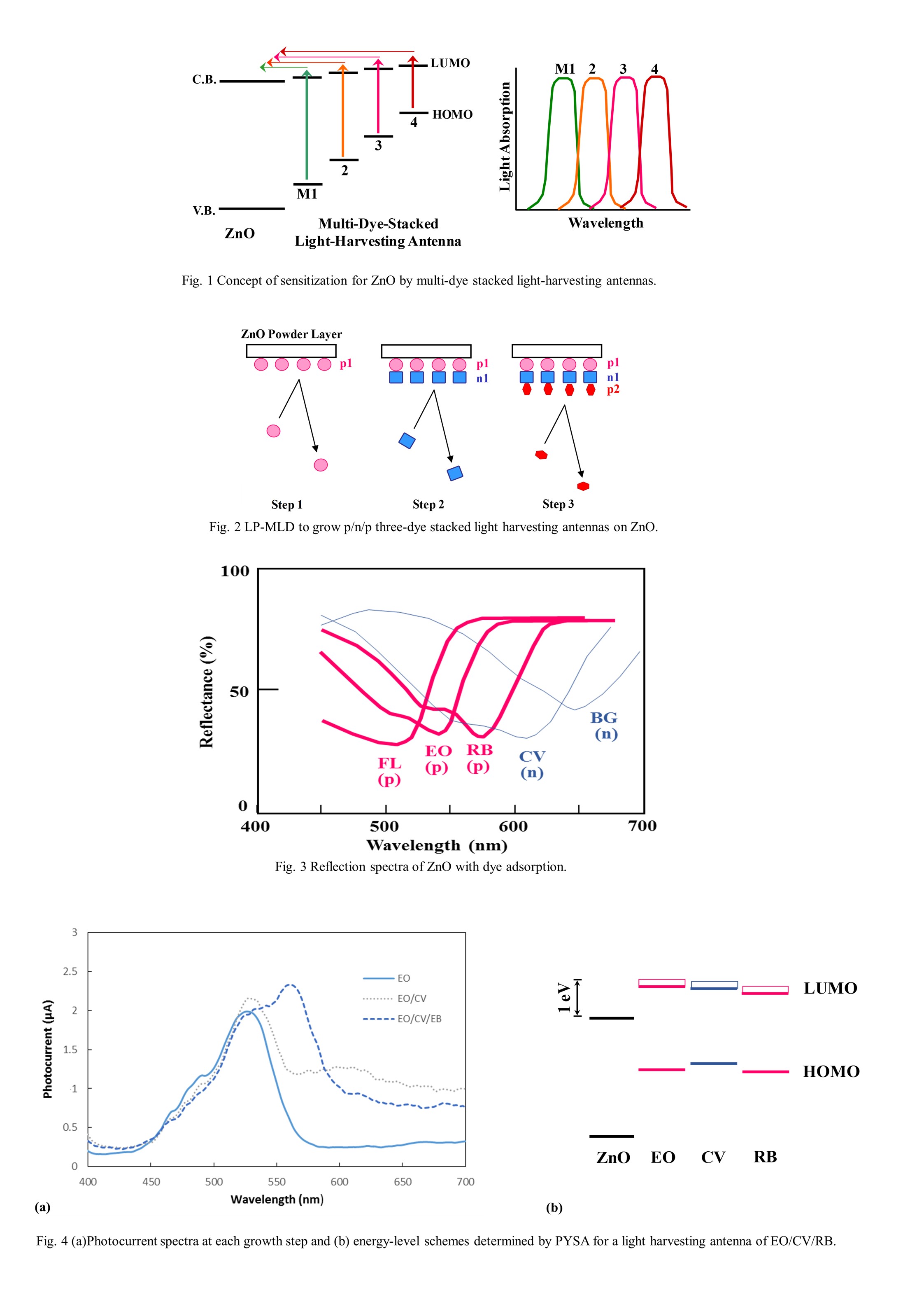