P-type dyes such as fluorescein (FL), eosine (EO) and rose bengal (RB), which can accept electrons, and n-type dyes such as crystal violet (CV) and brilliant green (BG), which can donate electrons,2 have absorption peaks at 510, 540, 570, 600, 660 nm, respectively. By stacking these five dyes, the photocurrent spectra can be widened, covering a wavelength range from ~450 nm to 700 nm. However, to date, sensitization has been carried out by combining only two dyes, limiting the degree of the spectral widening.

In the present work, stacked structures containing three or four kinds of dyes were constructed for further spectral widening. The structures were fabricated using liquid-phase molecular layer deposition (LP-MLD)3-5 using the electrostatic force between molecules. The p-n attraction and the p-p and n-n repulsion enable self-limiting growth to construct the n/p/n structures with strong connections.

Fig. 2 shows an example of the LP-MLD process for growth of a four-dye stacked structure on ZnO. In step 1, p-type dyes of p1 and p2 are deposited on a ZnO surface to form a monomolecular layer of p1+p2. Once the surface is covered with p1 and p2, the dye molecule deposition is automatically terminated because p-type dye molecules cannot be connected to other p-type dye molecules. After removing p1 and p2, n1 and n2 are deposited in step 2 to connect them to p1 or p2, resulting in four types of stacked structures: p1-n1, p1-n2, p2-n1, and p2-n2.

Fig. 3(a) shows a schematic illustration of an energy level scheme for the sensitization of ZnO using the four-dye containing stacked structure. This structure resulted in a broad photocurrent spectrum of a superposition of photocurrents generated by the four kinds of dyes. The spectrum is shown in Fig. 3(b).

Photocurrents were measured by applying a 3 V potential across slit-type ITO electrodes with a slit gap of 60 μm on glass substrates. Approximately ~5-μm-thick ZnO powder layers were formed on the substrates.

In the case of the two-dye stacked structure containing four kinds of dyes of ZnO/RB+EO/CV+BG, a strong sensitization was observed in the long wavelength region extending beyond 700 nm. However, the photocurrent decreased in the short wavelength region. The reason for this has not been determined, and is being investigated at present by considering the energy levels determined using photoemission yield spectroscopy in air (PYSA).6 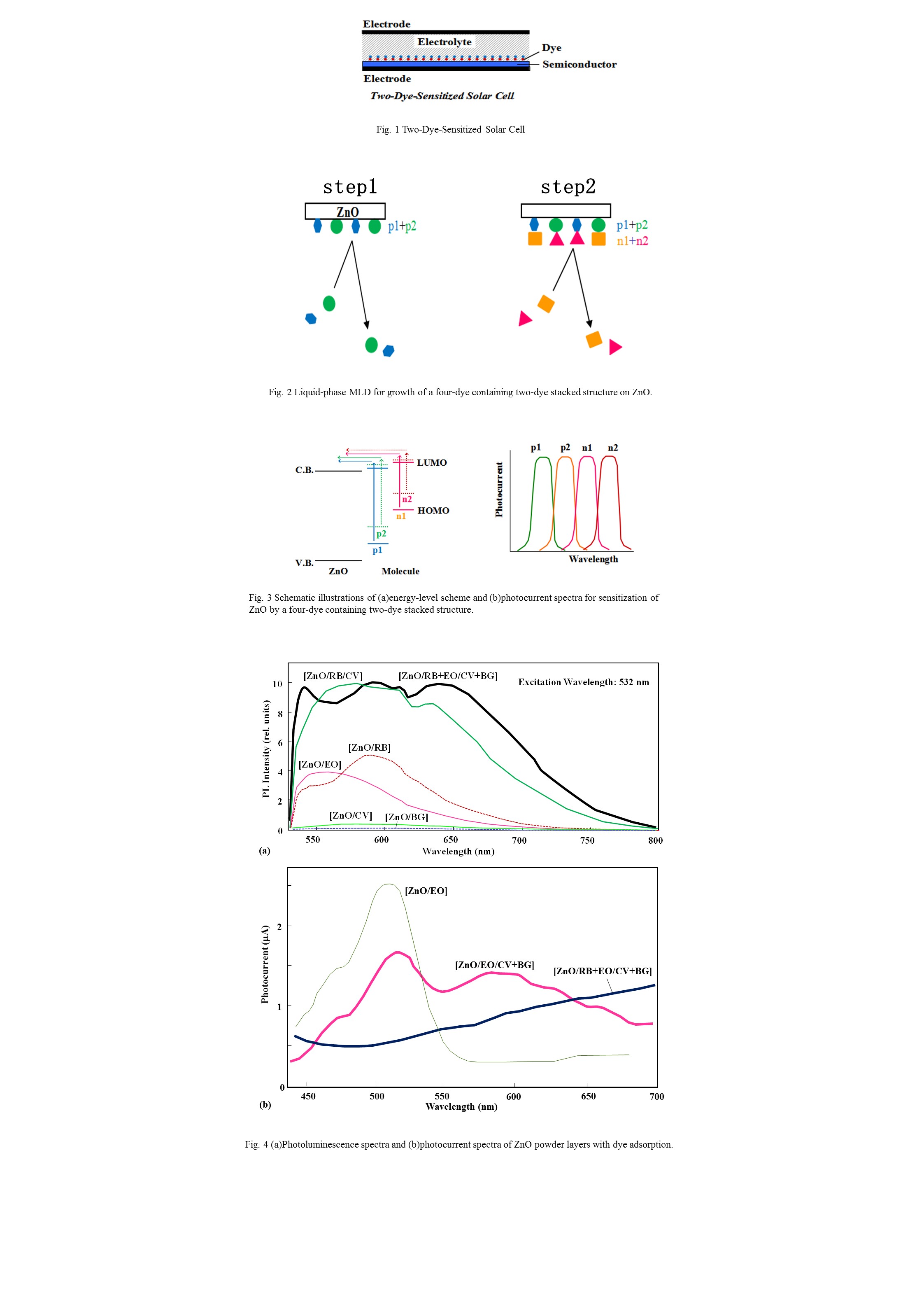