The commercial InGaN/GaN blue LEDs with the emission peak of 441nm were used. The epitaxial structures consisted of p- and n-type GaN layer and InGaN/GaN multi quantum wells grown by metal organic chemical vapor deposition on sapphire substrates. Different proton doses from 5 × 1010 to 1 × 1014 /cm2 were employed to investigate the effects of irradiation doses on the device performances. The irradiated samples were intentionally tilted 7° away from the normal direction of the proton beam to prevent the channeling effect. The Stopping and Range of Ions in Matter (SRIM) simulation was used to estimate the penetration depth of protons and the distribution of vacancies generated by proton irradiations. The L-I-V characteristics of InGaN/GaN blue LEDs were measured with Si photodiode connected to a HP 4156 parameter analyzer. The electroluminescence (EL) spectra were obtained by an optical fiber connected to the Ocean Optics USB 4000 spectrometer. The reverse recovery characteristics were measured with oscilloscope and pulse generator.

Figure 1 shows the current-voltage (I-V) of InGaN/GaN blue LEDs before and after proton irradiations with various doses, respectively. The LED diode I-V characteristics of InGaN/GaN blue LEDs were drastically degraded after high dose (1 × 1014 /cm2) proton irradiation. This degradation was caused by the displacement damage, resulting in the reduction of carrier concentration and mobility. However, the degradation of light output was much faster than that of I-V characteristics as shown in Figure 2. This faster degradation of light output indicates that defects generated by energetic protons can act as non-radiative recombination centers. The reduction of light output was also confirmed using EL spectra. In addition, the reverse recovery time, which is related to the minority carrier life time, was also measured by switching the current from 0mA to 50mA. The reverse recovery time before and after 1 × 1013 and 1 × 1014 /cm2 proton irradiations were 80, 79 and 73 ns, respectively. This degradation resulted from the reduction of minority carrier lifetime caused by the introduction of irradiation-induced defects in InGaN/GaN blue LEDs after proton irradiation.

In conclusion, the effects of 340 keV proton irradiations on InGaN/GaN blue LEDs were investigated using L-I-V characteristics, EL spectra and reverse recovery characteristics. The optical performances severely degraded compared with the electrical performances due to the radiation-induced defects served as the non-radiative recombination centers. 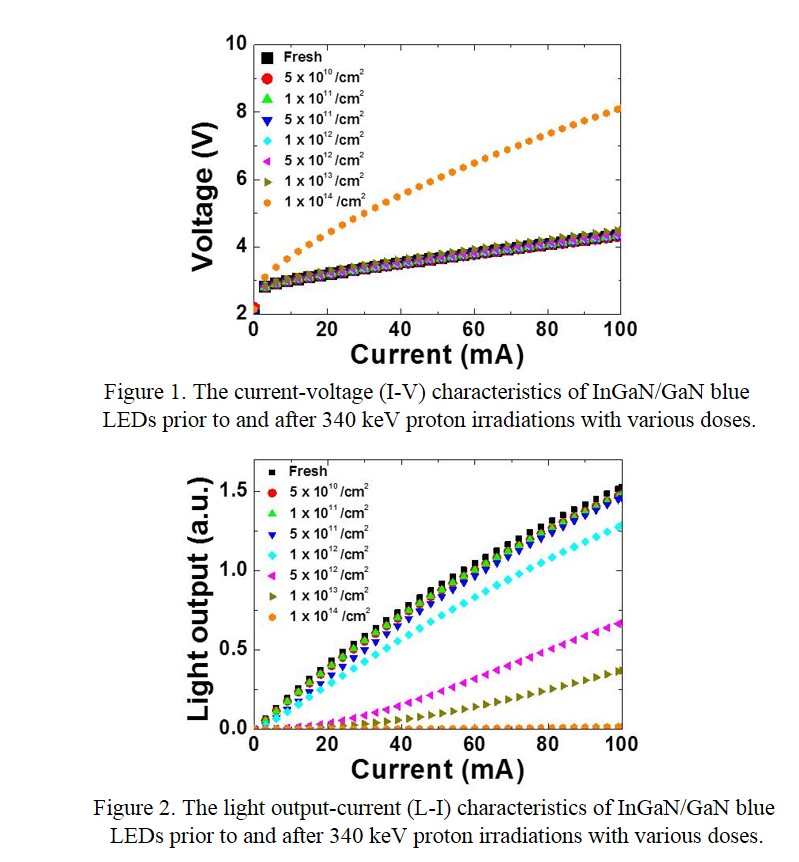