West Hall 1 (Phoenix Convention Center)
D. Ito (Kansai Univ.), H. Yoshida (Kansai Univ.), T. Shimizu (Kansai University), and S. Shingubara (Kansai University)
A resistive random access memory (ReRAM) is expected to be a next-generation nonvolatile memory substituting NAND Flash because of good scalability against downsizing, fast switching speed and low power consumption. ReRAM operation relies on the ability of the metal oxide to reversely change its resistance from high resistance to low resistance and vice versa by SET or RESET operation. The device structure is composed of a metal oxide layer sandwiched between two metal electrodes. In general, it is considered that resistive switching is caused by the formation and rupture of conductive filament (CF) such as metallic filaments or an oxygen vacancy filaments formed in the oxide layer. It is widely accepted that the type of filaments formed in the ReRAM devices depends on the combination of materials used as the electrodes and the oxide layer. The metallic filament is considered to be formed by metal ions migrated from the oxidizable electrode when a positive bias is applied to the oxidizable electrode. In the previous study, we found that ferromagnetic filament was formed at the on-state of the Ni/TiO2/Pt device [1]. Actually we observed a weak anisotropic magnetoresistance (MR)  at room temperature. This study suggested that the conductive filament was formed with migration of Ni atoms from Ni electrode.

In this study, we fabricated ReRAM device having two ferromagnetic electrodes; Ni and Fe-Ni. Both electrodes may be active under the voltage stress. Figure 1 shows the MR characteristics measured for the Ni/HfOx/Fe-Ni device at the room temperature. MR ratio is defined as α = [R(H)-R(H0)/R(H0)]×100. The ferromagnetism of filament was confirmed because the resistance of filament changed against magnetic field. It is most likely that this behavior is categorized as anistropic magnetoresistance. From the results, it is suggested that the conductive filament of Ni/HfOx/Fe-Ni device is formed by ferromagnetic materials. Further discussions and analysis will be presented in the symposium. 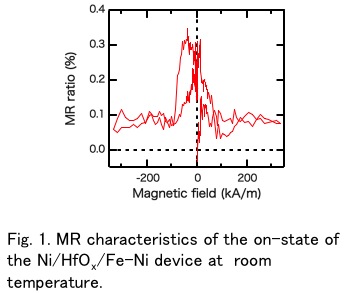