Typically, equivalent circuit models of electrochemical impedance spectroscopy (EIS) measurements include components that describe kinetic and diffusion behavior.  Often, they may be depicted as a series combination of a charge-transfer resistance and a diffusion impedance element to represent a mixed diffusion process.  Alternatively, diffusion-independent schematics also model impedance of electrochemical systems.  Because equivalent circuit modeling is an inexact description of the electrochemical impedance, either schematic may or may not indicate a good fit of the measured spectra, depending on the parameters of the circuit components. The figure below shows the significance of a mixed diffusion circuit model versus a diffusion-independent circuit model fitting the impedance of a twice cycled lithium-air battery. An appropriate circuit model must not only fit the EIS measurement, but also consider the design of the physical system to account for possible side reactions that introduce ambiguity to the model.  To overcome the impact of model uncertainty, however, alternative analysis techniques can help to verify the model of choice, such as the graphical analysis [1].

A graphical analysis of the complex impedance add additional support for a proposed physical model and its circuit parameters.  With this method, the imaginary part of the impedance versus frequency, on the logarithmic scale, are plotted to determine the frequency ranges where the impedance is linear.  The linear portions of these plots indicate separate electrochemical processes and distributed time constants, or constant phase element (CPE) behavior, with the slope of the line being the value of the CPE coefficient, α. This is helpful in determining the most accurate fit model with reasonable results. Since the focus is on the placement of the diffusion component in the circuit model, more emphasis will be on the low frequency range, where the diffusion impedance dominates.

In this study, the impedance of a lithium-air battery is measured after various cycles, and Nyquist plot and the impedance versus frequency plot are presented.  Fitted equivalent circuit models of mixed diffusion and isolated diffusion are fitted to the Nyquist plots and are compared to the results of the graphical analysis technique.

This work was supported by the FREEDM ERC program of the National Science Foundation under award number EEC-08212121. 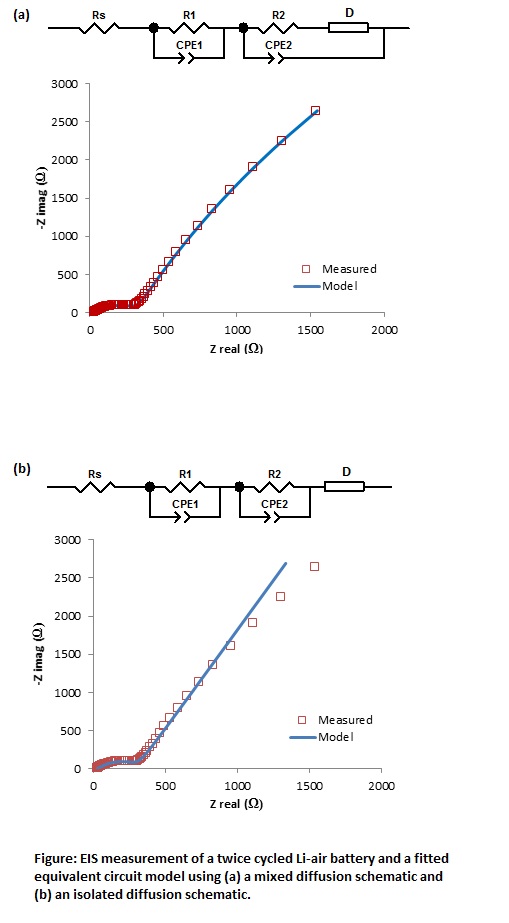